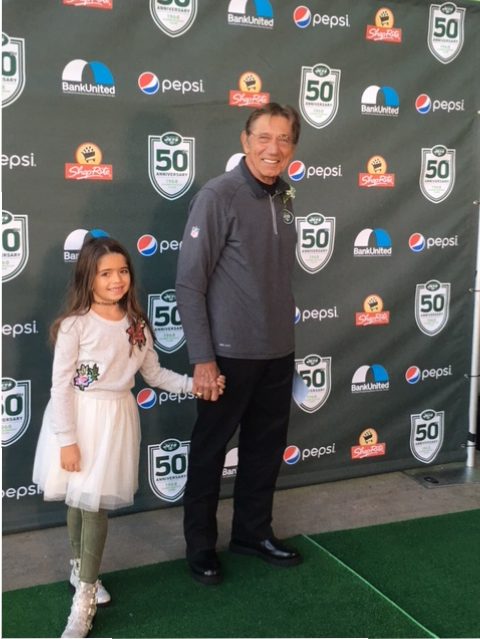 It has been a very exciting week for the 68 Jets.

In honor of the 50th Anniversary of their Super Bowl victory against the heavily favored Indianapolis Colts, and just a few days before Super Bowl LIII, the New York Jets and Marvel released a digital comic book with the storyline following Super Bowl III to the present-day team.

Saturday evening, the legends walked the green carpet before attending an Anniversary celebration for the 1969 Super Bowl at Metlife Stadium presented by BankUnited, Pepsi and ShopRite.

Joe Namath was in attendance with his granddaughter Emma, who walked alongside of her grandfather on the green carpet.

“Teams change, players change, coaches change, ownership changes, but the fans have been here since the Titans were bought and we started the Jets,” Namath said. “The Jets fans have been strong, they’ve been loyal. We haven’t had a lot of winning seasons and haven’t won a championship, but we’re pulling for them. You dream about it, it can happen.”

When asked about this year’s team, he added, “It is a team game. They need more pieces to be able to compete on a championship level. They’re growing, and we’ll see what happens. They just have to build this year and keep getting better.”

Today, the Super Bowl III team sat down for a pregame breakfast for Jets Rewards Members at the stadium. They will then be honored on the field during halftime of the Jets game against, none other than the Indianapolis Colts. There will be a special unveiling to commemorate the Super Bowl title. Check betting.com for more NFL odds.