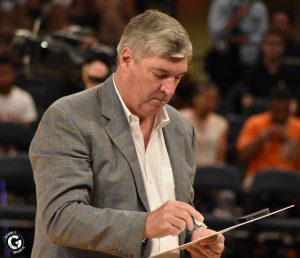 The New York Liberty clinched a playoff spot already and now you can add a first round bye to that. The Liberty (20-12) won its 8th game in a row, defeating the Chicago Sky 92-62 on Sunday afternoon at The Garden. Tina Charles scored a game-high 22 points to lead four Liberty players in double figures.

The Sky were led by center Stephanie Dolson, who had 22 points. The loss drops them to 12-19, a huge blow to their playoff chances. The Sky scored an upset win Friday against the Connecticut Sun.

It Got Ugly Early and Often

New York trailed 3-2 early in the first quarter but went on a 13-4 run to open up a big lead that it never relinquished. The Liberty led Chicago by 17 at the half and by as many as 32 points in the fourth quarter. Bria Hartley and Epiphanny Prince both scored 11 points, and Kiah Stokes recorded her 4th double-double of the season with 10 points and 10 rebounds. New York saw 43 points come from its bench.

New York forced 12 first-half turnovers and recorded seven steals. The Sky ended up with 21 turnovers, the most the Liberty have forced this season.The Liberty pushed the ball whenever they could and dominated the paint, out-rebounding the Sky 20-12 in the first 20 minutes.

Bring On The Playoffs

With the win, the Liberty clinched a 1st Round bye in the WNBA playoffs, and will open with a single-elimination 2nd Round game on Sunday, Sept. 10 at The Garden. New York also secured its third-straight 20-win season, the first time in franchise history the team has reached 20 wins three years in a row. The current eight-game winning streak is the second-longest in franchise history, trailing just a run of 10 in a row back in 2010. Some teams may be happy with just making the playoffs. Liberty head coach, Bill Laimbeer, isn’t a fan of that theory.

“Franchise this, franchise that,” said Laimbeer, “The only thing that matters is there’s no championship banner hanging.” As a franchise and as a team, the Liberty are past regular season goals. The only regular season bench marks that matter now are playoff berths and seeding. For the second year, New York has earned a first round bye. As fate would have it, the team that knocked them out of the playoffs (Phoenix) last season clinched a spot due to their win tonight.

Behind Charles, New York went 3-0 last week to extend its winning streak to eight games and improve to 20-12 for the season. The 6-4 center ranked fourth among East players in scoring (18.3 ppg) and fifth in rebounding (8.0 rpg). She also was second in three-point field goal percentage (62.5, 5-of-8) and tied for second in steals (2.0 spg). This was Tina’s sixth time this season, being named Player Of The Week. Not bad for someone not getting enough WNBA MVP mentions.

Next Up For The Playoff Bound Liberty


The Liberty returns to action Friday for its final regular season home game against San Antonio and finishes the regular season on September 3 in Dallas.