Poirier McGregor Trilogy Is a Hot Ticket but is the Donation Beef a Show?

Before UFC 257, Conor McGregor predicted that he would win the fight, but more than that he pledged to donate to Dustin’s charity The Good Fight in the amount of $500k. Poirier would knock McGregor out in the second round to even the score and set up a potential trilogy fight that would be for the lightweight strap since Khabib retired a few months earlier following the death of his father and final UFC win over Justin Gaethje.

McGregor and Poirier were a lot more amicable before UFC257 compared to the first time they were matched up and after the fight, it was seemingly no different, but it wasn’t until recently that the animosity started to flare up again via social media after Conor McGregor tweeted a prediction to which Poirier replied, “That’s a fun prediction. You also predicted a $500K donation to my charity…” which he finishes off by saying that McGregor’s team stopped taking his calls after UFC 257 about the donation.

McGregor was none too pleased with this response and hastily called off the fight; McGregor’s manager also commented on the subject by saying it was a “low blow” to put that out there. McGregor then seemingly changes his mind about stepping away from the fight and put Poirier on notice that he will pay for his words with an emphatic loss at UFC 264.

Well, today Dana announced that the non-title fight between the two is officially on and tickets go on sale this week, but I have a question: Is the beef real or just a show to sell tickets?

Excuse me, is this 100% real beef, or are there fillers and artificial flavorings??

I mentioned that before UFC 257 McGregor and Poirier were a lot more amicable than they were before their previous fight, so why all of a sudden is their beef back in high gear? Is it a show or is McGregor really trying to renege on his promise to donate?

In another article I wrote, I talked about athletes and their charitable contributions and I used McGregor as an example. His whiskey brand made a billion dollars in its first year and the company was pledging a percentage of the profits up to a million per year as a donation to first responders.

I felt this number was significantly low considering it’s not even close to 10% of the company’s yearly revenue and considering how costly it is to pay for an ambulance ride, I would assume that their yearly budgets are far more than a million a per year; I’d even go so far as to say that in most major cities a million dollars is probably 4-8% of their budget.

Why do I mention this? Because it would mean that this beef might actually have some merit, I mean, obviously McGregor does good work in his home nation, but none of us hear about that stuff nor do we know exactly what the breakdown of his charitable contributions is as a percentage of his yearly income. Based on the simple math I did a little earlier you can see that he makes enough money, so why then has he not made the donation?

He claims they never sent him details on how the money was going to be spent and that a donation is not a debt. Well if the donation isn’t debt, it certainly shouldn’t be required that Dustin discloses the exact details of how the money will be spent– or at least that’s how I feel about it.

As I understand it the funds would be spent building a gym in Dustin’s hometown and as far as I’m concerned that should be enough for McGregor to donate because he was the one who put it out there, right?

What happens after the money is transferred is a secondary issue, meaning that if Dustin misappropriated those funds McGregor would know about it because there would be no gym and at that point, McGregor has every right to try and recoup his money since it was not used in the manner for which the donation was intended. I am not saying he would get the money back should that be the case, I am just saying that when you donate there are no strings attached either way.

Conversely, Dustin was the one who reignited the beef by putting that information out to the public. Dustin could have settled that stuff behind closed doors, but if they really weren’t answering the phones maybe he felt social media was the next best way. I mean, his tweet wasn’t that offensive. It wasn’t like he told McGregor he wouldn’t fight him unless he made the donation. He didn’t say anything all that bad– save for actually putting the information out there to the public.

We could make the case that they are making this whole situation up to increase ticket sales. People love a good grudge match especially the ones that have bad blood between the two fighters and if you think about it, the timing is very suspicious. Two or three days before Dana White announces the fight is set, they get into a very public and seemingly ugly beef over a subject that I think most would agree is a very sensitive one.

Not sure we’ll ever really know the truth of the matter, but either way, I think we can all agree that if they are using it as a sales generator it’s a really foul tactic because there are millions of people out there who rely on these athletes and their charitable contributions for help and to help others, but if McGregor is being petty and stalling it out because Poirier knocked him out it just proves again that they only donate and tell us about it because it’s good PR for their brands and images. 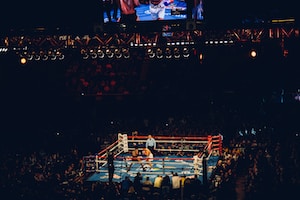 Photo by Joel Muniz on Unsplash