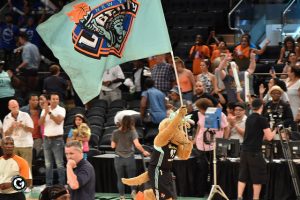 The New York Liberty seem to have save their best stretch of basketball for right time. Tina Charles had 24 points and seven rebounds as the New York Liberty beat Connecticut 82-70 on Friday night to extend their winning streak to four, while ending the Sun’s run at six. Sugar Rodgers added 13 points, Nayo Raincock-Ekunwe 12 and Bria Hartley 11 for the Liberty (16-12). They also snapped the Sun’s eight-game home winning streak. With the win, the Liberty improved to 16-12 overall, moving four games above .500 for the 1st time this season.

After getting off to a slow start in the 1st quarter, trailing 20-10, the Liberty responded with a 31-9 run that put them up by 12 points. Connecticut pulled to within four by halftime and was as close as two points late in the third quarter, but never regained the lead. New York put the game out of reach with a big run to start the fourth, moving back in front by double figures on a Rodgers triple at 5:54 that made it 73-62.

The Sun averaged 91.8 points during their winning streak, but struggled to find an offensive rhythm against the Liberty. Connecticut shot just 34.3 percent for the game, its lowest of the season, and was 4-for-21 on three-pointers. The Liberty made 40.6 percent of their shots, but were 7-for-23 on threes.

Another Stellar Homecoming For Tina Charles

Tina Charles used to be a fan favorite in Connecticut, but now she’s become a thorn in its side. After being held scores in the 1st quarter, Tina Charles posted 18 points in the 2nd quarter, just 4 shy of the WNBA single-quarter record of 22 held by Diana Taurasi.

Tina Charles finished with a game-high 24 points, posting her 17th 20-point game of the season and posted at least 20 points in consecutive games for the 1st time since July 28.

Keeping Up The Pace

New York is riding a four game winning streak and hoping to lock up a top four seed and earn a first round bye. “This is another big game,” said Laimbeer, “Not so much because it’s Connecticut, it’s just that it was an important game for standings.”

The Liberty and Washington are both 16-12 for the season with one more head-to-head left. The two team each have a game in hand, the August 25th game at Madison Square Garden will give the winner an advantage, should the team remain tied at the conclusion of the regular season.

The Liberty returns to action on Sunday afternoon when it hosts the Minnesota Lynx at Madison Square Garden at 3PM. It is the Liberty’s Unity Game, with the team partnering with RISE for a pregame panel and activations.