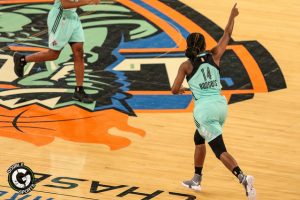 The hottest WNBA team right now is the New York Liberty. This isn’t even up for debate. The Liberty (19-12) won its 7th in a row, defeating the Washington Mystics (17-13) 74-66 on Friday night, in front of a rocking playoff-ready crowd at the Garden. Epiphanny Prince and Tina Charles both scored 20 points to lead the Liberty.  Shavonte Zellous added 15 points for the Liberty and Bria Hartley added 10.

”We take pride in our defense,” Charles said. ”Being aggressive and doing what we do out there.”

Elena Delle Donne had been sidelined since the beginning of August with a torn ligament in her left thumb. The Mystics’ leading scorer missed six games and Washington went 3-3. She returned against New York and finished with 15 points

The Liberty shut down the Mystics by crowding Delle Donne, as well as centers Krystal Thomas and Emma Meesseman, and forcing Washington to shoot from the perimeter. The Mystics shot just 3-for-18 on 3-pointers, a lowly 16.7 percent.

The Liberty moved a game and a half ahead of Washington for the No. 4 seed in the WNBA playoffs, and also pulled within one game of Connecticut for the No. 3 position after the Sun lost on Friday night to the Chicago Sky, 96-83. New York won the season series against the Mystics 2-1 and now own the head-to-head tiebreaker in the standings.

”This was a big win for us and was important in the standings,”  Zellous said.

“We really wanna look at that bye and skip that first round and we put ourselves in good position, but there’s still a lot of basketball to be had,” head coach Bill Laimbeer said.

The Liberty are not only playing their best basketball of the season right now, they are putting everyone on notice once the playoffs begin. The Liberty are taking the right approach ending the season: Play hard and keep the consistency going. Seems like it was just a few weeks ago when the Liberty were just a .500 team.

The Liberty return to action this Sunday, when they host the Chicago Sky at 3pm. A win Sunday will help New York secure a bye, while Chicago is looking to pass Dallas for the final postseason spot.