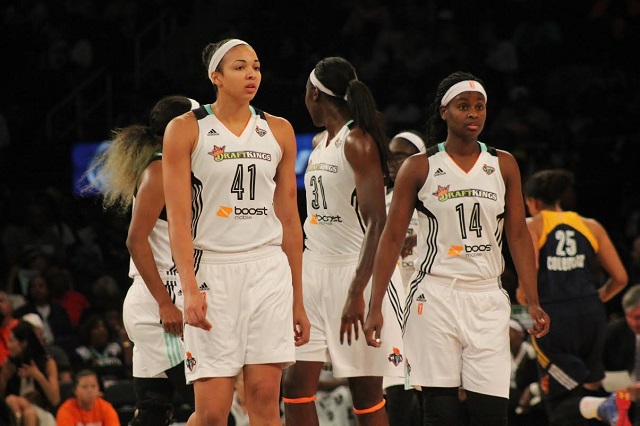 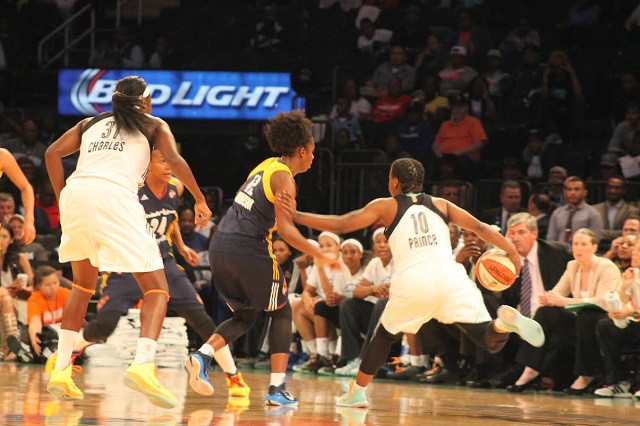 The New York Liberty opened a lot of eyes last night at Madison Square Garden. They had just survived  a decisive third game the night before against Washington before having to come back one night later to start the WNBA Eastern Conference Finals against Stephanie White’s Indiana Fever, who have had New York’s number all year. But the Liberty came out shooting, hitting targets all night while Tina Charles and Kiah Stokes, New York’s Twin Towers stood tall and dominant in an 84-67 rout to claim a 1-0 lead in the best of three. The Liberty wake up this morning knowing that they are one win away from bringing themselves into the WNBA Finals.

“I’m shocked at the effort, intensity, and focus that we exhibited in back-to-back games,” Liberty Head Coach Bill Laimbeer said postgame. “I’m very proud of our players. But at the same time we all know that we only did what we are supposed to do.” Sometimes a team  with no rest can play better without the time to clutter their mind  with  the everyday doubts that haunt a player and may even interfere in top performance. The Liberty showed the benefits early as they came out for it from the start trading blow for blow with the Fever. They had the bigger guns, Epiphanny Prince rebounded by scoring more points in the opening quarter than in all of Game 3 in the previous series. She went on to score 17 points.

Sugar Rodgers, who had an explosive night in that same game, continued to look to attack the basket. She was not as successful there but the two areas she shined in was her three point shot. In six attempts she hit four. She also had five assists, most of them  going to Kiah Stokes.

Kiah Stokes led the attack from the bench, hitting shots not seen previously, following up on misses to put back in often, and receiving passes in the paint which she finished off cleanly to the tune of a team leading 21 points tonight. Her accuracy rate showed her hitting nine of eleven shots and all three free throws she shot. Add to that her five rebounds and three blocked shots and you have a total game effort. It resembled the kind of game Tina Charles had. “I just thank Tina and the other players do a great job of finding me,” Stokes explained afterwards, “I don’t think I did anything special, I just finished like I was supposed to.”

Charles, who according to both Head Coaches Bill Laimbeer of the Liberty and Stephanie White of Indiana, is the best player in the WNBA and even the world, when she feels she wants to be. Tonight she came within a whisker of a triple double, scoring 18 points, grabbing seven boards, blocking two shots, and dishing out an eyebrow raising nine assists. “Tonight we saw the best player in the world out there,” Laimbeer proclaimed, “She put on a show. Tina dominated the game all over. She imposed her will on this game.”

To show how how a level one must play to win in this league, Tamika Catchings (9 points) talked about the mindset of a team and how it’s more important to execute than scouting. The Indiana players were in the Garden  watching the Liberty struggle to victory in the deciding third game in the first round. They appeared to let down. Not much, but just enough. They complained, they looked easily frustrated, but amazingly were only down four at the half. “We are at our best when we defend, get rebounds, and push the ball in transition.” Tamika explained, “I think that down the stretch everyone started looking up at the clock and tried to do it themselves, even me. That is not when we are at our best.”

This is where the defense of a team can forge victory. Carolyn Swords return to the lineup after missing the game before with a foot injury was crucial as she continues to be the center of a defense that is immovable and once again allows Tina Charles to do more things. Catchings talked about the lack of a running game and that is what happens when you shoot 56% and and out rebound a team on both sides of the court you neutralize the speed factor. Indiana was held to seven third quarter points and stretching their lead to 15 points going into the home stretch. Tina Charles took over the game in the third working the paint from left to right for layups, hook shots, and her trademark fadeaway jumper she admitted tonight to being inspired by Patrick Ewing, her favorite player. “The only person that can hold Tina Charles back, is Tina Charles.” Indiana Head Coach Stephanie White admitted.

In the fourth, Kiah Stokes continued to find the basket time and time again. The Liberty had perfect balance offensively, shooting very well outside while opening up the middle for Liberty bigs to roam the paint. Charles, for one, makes New York difficult to beat when she is engaged as she is currently. She has been in a perpetual state of focus concerning the playoffs. She is one great game from getting the Liberty to a place they have not seen since 2008, the WNBA Finals. Game two will be played Sunday in Indiana as the Fever look to force a deciding Game three and the Liberty look to end the series and advance to the WNBA Finals.