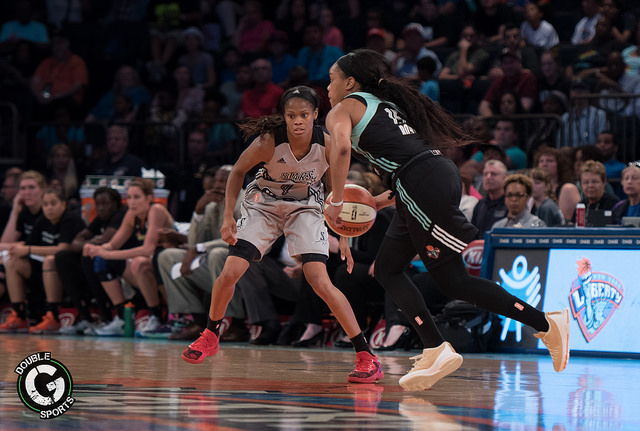 Entering the  2017 WNBA season, the New York Liberty face some interesting challenges. Both 2015 and 2016 ended with the Liberty atop the Eastern Conference. A blue collared defense led New York to a 23-11 mark in 2015, and 21-13 in 2016. Yet still, both of the last two seasons didn’t even produce a WNBA finals appearance.

“Our goal is to win the championship,’’ Team President Isiah Thomas said during the team’s media day. “We’ve gotten pretty close. This year we hope to finish it.’’

“It would be exciting for New York basketball fans if the Liberty can win one,’’ Thomas continued. “The last two years were exciting times. We’re getting closer and closer. This year we’re hoping we have the right combination.”

The Liberty led the league in defensive field goal percentage last season (41 percent) and limited opponents to a league-low 50 percent shooting on attempts inside of 5 feet. So you can see, that wasn’t the issue. Here is the three main questions concerning solutions for the Liberty to get back to the Eastern Conference Finals.

In 2015, Prince missed the first ten games while playing for the Russian national team. And a knee injury cost her most of the 2016 season. With Prince healthy for an entire season — and sharpshooter Sugar Rodgers and rookie Lindsay Allen (Notre Dame) on the roster — the Liberty feel they have a nice blend of speed and shooting to supplement their half-court attack. Something the Liberty could of used in 2016.

What Will Tina Charles Do For An Encore?

So much of New York’s 2017 will come down to Tina Charles. It’s frightening to consider that Charles led the league in points and rebounds last season, won the MVP in 2012, yet we may not have seen the best of her yet. Charles is the unquestioned leader in New York and Laimbeer believes she’s the perfect player to help the staff implement the subtle changes to the offense this season.

Sugar Rodgers and Tina Charles are a defensive challenge for opposing teams, forcing them to make adjustments on that end of the court. They are both snipers from all over the floor. If Rodgers is double-teamed, she can dish to Charles for the bucket, and vice versa. If these two ladies can stay healthy,  getting back to the Eastern Confrence finals shouldn’t be a problem for the Liberty.

What Will Newcomers Bria Hartley and Kia Vaughn Bring To The Liberty?

Bria Hartley is expected to help the Liberty improve their outside shooting (the club ranked eighth in 3-pointers made and third in 3-point field goal percentage). Vaughn, who along with Hartley, Charles and Prince are New York natives, will give the Liberty depth on the front line and added rebounding.

Sky is the limit for the 2017 New York Liberty. If the offense improves, I like the Liberty to finally break that wall and return to the WNBA finals in the summer. The 201 7 season begins at home, on Saturday afternoon, when they host the San Antonio Stars.

Without Serena, Who Will Be Tennis’ Big Star?
Kristaps Porzingis Twitter Gate
Posting....