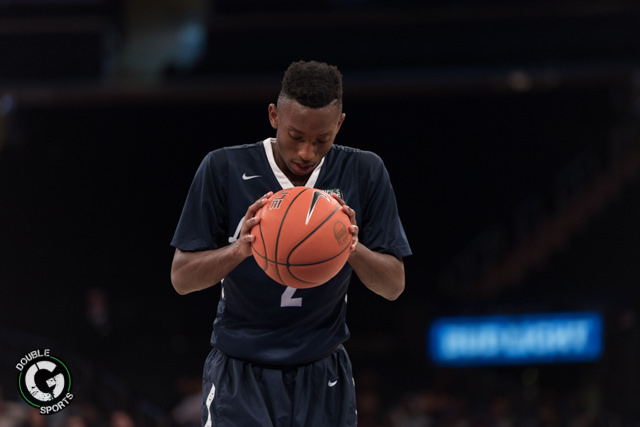 For years, we have seen some of the nation’s top college basketball prospects come out of the small state on the left side of the Hudson River. New Yorker’s snarl by calling it the 6th borough, but as a born and bred Jersey Boy, I’m proud to remind everyone of the revolving door of talent that New Jersey Basketball produces.

Just look at how N.J. Basketball talent has effected the landscape of the NCAA and NBA over recent years. Stars like Karl Anthony Towns, J.R Smith, Kenneth Faried, Joakim Noah, Kyrie Irving and of course the Morris twins have all gone on to represent their home state well in the NBA. But the bigger and more unfortunate similarity between these names (along with hundreds more), is not one chose to stay in New Jersey for their college career. And, I mean, can you blame them?

For years now it has been the same David vs Goliath options for NJ players making their college decision. Either go to a top school in a power conference and play in an NBA sized arena, enjoy four pools on campus, nine different dining halls, and don’t forget the beautiful women who will be casually located in every dorm already wearing your jersey number. Or, on the other hand, you can stay in New Jersey, where there is one power conference school (conveniently located at the bottom of that conference) in the middle of the East Brunswick flatlands, and is known for submarine sandwiches and commuter students with two jobs.

The fact is, New Jersey has had the highest percentage of its players leave the state to play college ball and for the simple reason that they never mustered enough to offer these players who would have considered staying.

However, over the course of the past two to three years, NJ may be making the initial first steps to change their case in this predicament. Let’s start with Rutgers. After leaving the debilitated Big East to join the Big Ten, everyone knew they were in over their head. To this point, after hiring coach Steve Pikiel, whose sole focus was to change a dying culture, it soon became obvious that being in over their head may be exactly what the Rutgers Scarlet Knights needed. Now after winning a new record of four games in conference, Rutgers is already getting looks as an up and coming team to reckoned with, rather then another perennial doormat.

On the flip side, the Big East is starting to do NJ basketball some favors as well. The Seton Hall Pirates have seized an opportunity in a new look conference. They are also recognized as a top team, which gets to play a juggernaut in Villanova twice a year. The Big East is still nowhere near where it was before Syracuse, Pittsburgh, WVU and UCONN departed. That being said, there are notable power schools getting it back on track, and Seton Hall has made a case to be at the top of that list.

Next, lets look at the University of Monmouth. Once a little Jersey Shore school known for house parties and D1 AA football, it is now in the yearly conversation to make the NCAA tournament as a mid-major. A school that used to call a large high school sized gym their home court, has now upgraded to a small arena. Add in a few productive gym-tan-laundry’s under your belt, and all of a sudden the Jersey Shore doesn’t seem too bad.

Now maybe your not at the level of a BIG10 or Big East recruit, but Monmouth may not be the mid-major you’re looking for academically. Lets not forget the Princeton Tigers who may have one of the most beautiful campuses on the East Coast. Princeton has now been ranked in the preseason RPI top 50 over the last three years, making their basketball program seem anything but IVY league.

Between all the strides these four programs have made over the last few years, the landscape of NJ college basketball is changing. One shouldn’t be surprised if we started to see a few more of New Jersey’s top HS players staying home for once, and pursue the next step of their basketball careers in the state that gave them the toughness and grit that got them there in the first place.