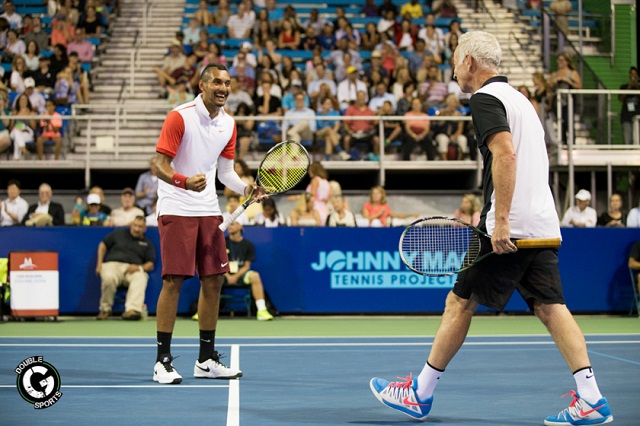 There were tennis balls being struck and crowds reacting to quality forehands and lobs as well as passing shots and aces. No, this was not the U.S. Open. It was Randall’s Island in SPORTIME Stadium. The reason for this event was to raise funds for the Johnny Mac Tennis Project, a 501 (c) (3) public charity.

Yet, this event was not without stars of note. In fact, it was the reason many attended, including former New York City Mayor, David Dinkins.

It has already showed to be a proven program. The JMTA already has two players in Noah Rubin, coached by Lawrence Kleger, director of SPORTIME and the JMTA, who won the 2014 Wimbledon Junior Boys Championship and Jamie Loeb, who was the NCAA Women’s number one player as well as National College Player of the Year, both accomplishments in 2014. John went out in his list of contacts and was able to acquire the help of Rafael Nadal for this evening. At 29, Nadal is one of only ten players to win career Grand Slams (nine French, two Wimbledon, two U.S. Opens, and one Australian.)

“He came here for nothing. He’s a class act,” John McEnroe said at the press conference held before the matches. “He started a revolution in Spain and now you can see all the kids he inspired and the players that come out of Spain because of him. My goal is similiar, to create that same kind of revolution.”

Rafael Nadal was slated to play Lleyton Hewitt, winner of thirty career titles which included the 2001 U.S. Open and 2002 Wimbledon championships. We learned this evening that he will be retiring this year at age 34 and will participating in his ginal U.S Open. “Its a pleasure to be here. Helping kids is a great thing,” Nadal shared. “Not every sport does this kind of thing to help others.” Nadal credits McEnroe for the level of play and the tour itself though he was more a Sampras and Agassi follower in his youth. “The name John McEnroe is one of the most important players in the history of our sport, its most charismatic,” Nadal responded.

McEnroe was also well known for his dislike of officials during his career. So it was ironic and entertaining to see him taking the umpires chair for the Nadal-Heweitt exhibition match. The irony was not lost on John as he joked and moved things along well. He later played doubles with Nick Kyrgios, riding star from Australia against his brother Patrick and former number one doubles player Jonas Bjorkman.

But the reason for this building was to provide a facility for youth players and the first matches showed off JMTA youth matches. Nadal, a native of Mallorca, Spain, is working on a project for youth in his hometown and all of Spain. “Its everything a kid needs to try to be a pro player. It will have a school in the academy,” Nadal shared. “I want to keep being involved in tennis and give something back to the kids, my experience.” Hall of Famer John McEnroe, who counts Nadal as one of the greatest effort players in history, has been hard at work in youth tennis. He wants to in the end revive the sport here. “I want to bring the buzz back to Tennis in New York.”

Jason Day Runs Away with the Barclays, Villegas Among Group that Sneaks into the Deutche Bank
Sayreville Looks to Bounce Back from Football Incident