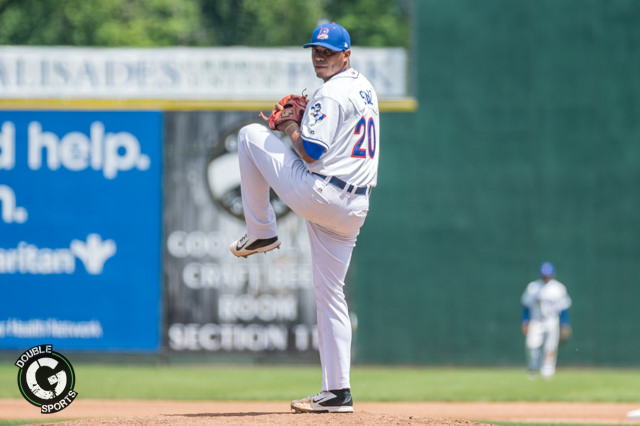 Before the Rockland Boulders face-off against the Sussex County Miners in the 2017 season home opener on Thursday night at Palisades Credit Union Park, I had the opportunity to chat with Manager Jamie Keefe about the upcoming season.

Entering his fifth season with Rockland, Keefe has compiled a 226-167 record and led the Boulders to three consecutive playoff appearances including a Can-Am League Championship title in 2014 and back-to-back regular season championships in 2014 and 2015.

“This is my 25th Opening Day and a special one,” said Keefe. “You lose track of the years but opening day are the ones you can look back and remember.”

However, this past off-season was difficult for Keefe due to the fact the Boulders blew a 2-0 advantage against Ottawa in the Can-Am League Championship Series last September, losing the series in five games.

“Walking off the that field without the opportunity to hold that gold and put that ring on your finger,” explained Keefe.  “A bitter taste all winter.”

Examining the roster, Keefe said he had to turn the page and move on. “As far as that feeling and what it feels like until (Thursday) nothing you can do and it was one heck of a run and series but at the end of the day stinks and this is why we play the game, competitive and love to win.”

The 2016 Rockland Boulders (58-42) overcame many hurdles throughout the season, encountering 30 plus transactions, players signed to Major League Baseball contracts, trades, injuries and coming back from an 0-2 deficit in the first round of the playoffs against Quebec. It will be no different this season with shortstop Junior Arrojo signed by the Miami Marlins, Jared Schlehuber accepting a coaching position with the Kansas City Royals and Devin Harris retiring. All three players combined for 36 home runs and 172 RBI.

Arrojo became the face of the franchise the past two seasons, setting Boulders franchise records last season in batting at .341, swiping 47 bases and .483 on base percentage. In addition, Arrojo owns the team record in career batting average at .313, 128 walks, 89 hit by pitches, 93 career stolen bases and .435 on base percentage. In 2015 and 2016 Arrojo set the Can-Am League record for hit by pitches with 36 and single game record of four.

“A lot of offense and our identity has changed and all for a good reason,” said Keefe. “Those are good gigs for everybody. Nothing wrong with new faces and excited about having them here and a new bunch of guys and ready to go.”

Despite losing that quality production, the Boulders signed a familiar face in Joe Maloney, the 2015 Can-Am League and Baseball Independent Player of the Year. Maloney owns 20 franchise and nine Can-Am League records. In 2015, Maloney batted a franchise record .337 with 14 home runs, 83 RBI and scored 91 runs.

“Joe is going to end up playing more first base and a little right field,” Keefe said.

Dylan Tice is the new second baseman. Tice was drafted by the St. Louis Cardinals in the 2015 MLB Draft. “He reminds me a lot of Matt Nandin and he has been around with clutch hits and played a darn good second base,” said Keefe.

Mike Fransoso returns for a second season and will slide over from third base to shortstop. In the fifth and deciding game against Quebec last season, Fransoso hit a walk-off two-run single completing a remarkable 0-2 comeback series win.

James Roberts takes over at third base and Keefe is impressed with his versatility at playing multiple positions that are second, shortstop and third base. Keefe also sees Cody Regis filling in at third base as well.

In left field, another former Boulder makes his return in Jon Smith who last played in Rockland back in 2012 and experience in the American-Association League. Jared McDonald returns for a third season in a row. McDonald’s 2016 season was cut short in July due to a serious spleen injury while attempting a diving catch in Sussex County. Before the injury McDonald was enjoying another solid season setting the minor-league all-time record reaching base for a seventh consecutive time. Mike Montville also returns for a second season and will start in right field. Last year Montvile hit 11 home runs and 49 RBI.

Behind the plate, Marcus Nidiffer is back for a fourth season. In 2016, Nidiffer belted 20 home runs and registered 79 RBI while being named an All-Star. Backing up Nidiffer will be Alex Herceg. Keefe had a high praise for Herceg saying he won the job flat out in spring training and swung the ball well and called a good game.

“I don’t know what our lineup is going to be on opening night but I don’t think 1 through 9 I had a lineup so strong and when you look at the numbers on paper we still have to perform up to the ability and compete,” said Keefe. “With the new guys and returning guys we could really have another special season.”

Regarding the pitching staff, Keefe sees his starting five rotation with Richard Salazar, Markus Solbach, Bo Budkevics, Justin Topa and CJ Reifenhouser. Riefenhouser has Major League Baseball experience last appearing with the Tampa Bay Bays in 2015. Named the opening day starter, Salazar has registered 31-career victories in a Boulders uniform. Budkveics returns for a fourth season while Solbach is back for a second stint with the organization. Before the Arizona Diamondbacks purchased his contract, Solbach went 6-2 with a 2.43 ERA and 52 strikeouts.

“Salazar, Bo, and Solbach know the Boulder way and we set a precedent on what we want here and guys need to fit in” Keefe said. “Guys know what to expect who have been here and we expect to go out and lay it on the line every single night and if they are going to do it be Boulders and if not we are going to look elsewhere for help.”

“Mayckol Guiape is a veteran and been around for a while and excited to have him on our side,” said Keefe. “I don’t expect him to be here for too long once he gets a bunch of innings and puts up good numbers he will be out of here since he was in the big leagues seven months ago.”

On expectations for the 2017 regular season Keefe said, “ Obviously we want to win a championship but you have to be realistic going into a 100 game season and don’t set out for that goal and what you want to do is win that last game of the season and hold that trophy up. Things are going to happen and have to be healthy and go out and win every game we can.”