Dave Sims’ first job out of college was with The New York Daily News as a sportswriter and NBA Columnist.

Growing up in Philadelphia, Dave Sims always enjoyed going to sporting events. By the time Sims reached Bethany College, he was working on the college newspaper and TV stations.

“I was the sports director of the radio station, sports editor of the newspaper for about a year and a half/two years,” Sims explained to In The Zone. “During spring break in March of 1973, I had an interview to be an intern at the (Philadelphia) Inquirer. I was one of 14 kids who got that hook-up, and it went well for me. Tim Kelly, the sports editor, came to me in August before I was going back to school and said, listen, we do not have this national program again next year, and we would love to have you come back in sports, and I said hell yeah and went back for a second year.”

Sims’ first job out of college was with The New York Daily News as a sportswriter and NBA Columnist. Also, Sims covered college football/basketball and the New York Cosmos, a gig that lasted seven years.

“That was like a postgraduate degree (New York Daily News), I got thrown into the deep end and had to swim out, and I was not a very good swimmer,” Sims described. “Ups and downs, Peter Vecsey was very helpful during his time when I was there. I was the first black sports reporter, pretty much every place where I worked. It was generally white ethnic groups who dominated the paper.

I learned so much about the pressure of deadline writing, I was never going to take pieces out, and that wasn’t my thing anyway, and tabloid nature of the paper suited me with 500 to 600 words and to tell a good story.” I got to be around Dick Young, covered college basketball and football, did a lot of Kings Point and Columbia football, St. Francis and St. John’s college basketball, some of the D3 and CUNY conference, and sidebar work with the (New York) Cosmos. I look back at that as not a master’s degree, but I feel like I have one with so many varied experiences that it proved to be worthwhile.”

After seven years with the New York Daily News, Sims worked as a sports anchor at satellite Sports Channel, hosted SportsNight with Dave Sims on WNBC, and appeared on MSG Network providing coverage of the New York Knicks, and co-hosted a show with Ed Coleman on WFAN.

“They (WFAN) paired me up with Eddie Coleman for three and a half to four years, and we did well,” he recalled. “I mean, 10 to 2 is not a huge moneymaker, but ratings-wise we did well, and then they wanted to make a change. That was a lot of fun with Coleman, one of the great broadcasters, a good friend, and we had a lot of laughs and talked to a lot of people.”

“That (United Football League) was a lot of fun, we had some folks that had some money, and they threw it together to start another league,” Sims remarked. “It was a great experience, the season started in mid-September, and I had to step away from a couple of (Seattle) Mariners games, and they were really good and let me do it. There were October games on Wednesdays and Thursdays. Then I would do my Westwood One NFL Game on the weekend, so I was racking up the mileage, you can’t believe, and it was fun working with Doug (Flutie); he’s a very self-motivated and competitive person. He, Kordell (Stewart), Anita (Marks) hit it off immediately, terrific, and met many good people. I got to meet Dennis Green and wind up doing a football game with him. That was great work with Ron Jaworski and Beasley Reece; I do remember somebody saying we had among the highest local ratings of a team of pre-season NFL game.” 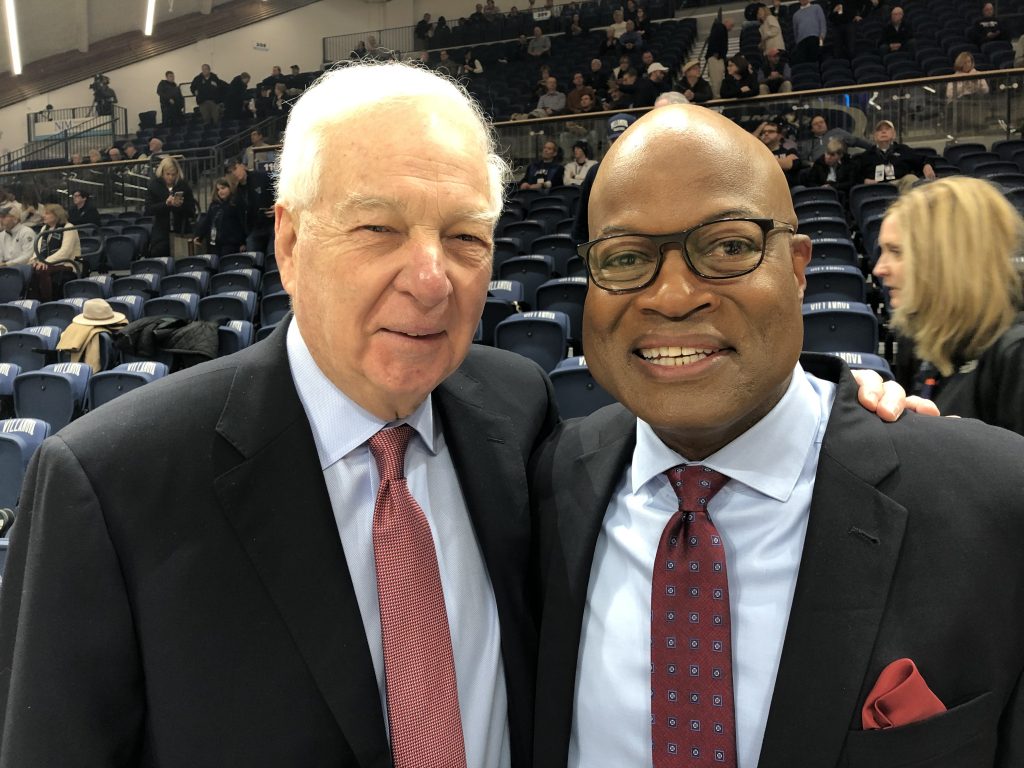 For 18 years, Sims worked as a play-by-play announcer for ESPN, calling Big East basketball action. Also, Sims joined WCBS-TV in New York City as the weekend sports anchor. “I had a part of Big Monday while doing basketball which was thrilling,” Dave Sims noted. “Being an East Coast guy, I-95 and born and raised in the Philly area and living in New York, I know all those people and right at home with everybody and a great experience.”

“In that period, I got hooked up to Channel 2 WCBS in New York, and it was great there were no conflicts. I was able to keep doing play-by-play, was just living big at Channel 2 and usually had Tuesdays and Wednesdays off so I could do Big East local games. I could go to St. John’s, Seton Hall, and Rutgers was the biggest at that time and went up to Connecticut and Providence.”

Since 2005, Sims has co-hosted a show, “Basketball and Beyond” with Duke University Men’s Basketball head coach Mike Zrzyzewski on Sirius XM Radio. “Mike and I have known each other since 1977, and we used to have these MET Basketball Writers Association weekly get together with the coaches. We’d have local writers there; you’d come out and have a good meal, have some laughs, and get quotes.”

“They asked Mike to do a show because they had big sponsors and I happened to be down at Duke at this particular time with my wife during media coaching and asked if I could be a host and the thing that’s cool because of Mike’s career and success over the years. When our producers call and say, hey, Coach K wants to talk to you, we pretty much get anybody we want. His coaching peer group, they all love being with him, and the list goes on endlessly, and we have a great run.”

Dave Sims – the Voice of the Seattle Mariners…

Sim’s most notable accomplishment for the past 14 years has been the TV Play-By-Play Announcer for the Seattle Mariners. “It’s probably the best, I’ve had some great jobs, and this is a lifelong dream,” Sims described. “When the Mariners job opened up after Ron Fairly retired after the ’06 season, I put in and beat out about 100 guys, and here I am, so it’s been great.”

A long and distinguished career in sports broadcasting has resulted in Sims named the Sportscaster of the Year the past three years in a row from the National Sports Media Association. “It means a lot when every peer group salutes you like that, but I’m very appreciative,” he said. “I look at the people who came before me who were part of this group,  giants in the industry and during my lifetime, guys I looked up to. When I look at the pictures of previous get-togethers, banquets, and award ceremonies, and having my picture with those cats, that’s unbelievable.”

“With all these accolades, Sims understands the significance and role that diversity plays in sports media. It’s way better than it was; I think organizations at least in print and sports departments are a lot less afraid to have more than one black guy or a person of color,” Sims explained. “There are now women; in my end of work, I’m the only full-time black TV announcer in Major League Baseball and fifth or sixth of all-time, which is pretty amazing. It’s better, but we got a long way to go.”

Sims offers this advice for aspiring journalists whether they are attending college or a couple of years into their career. “The economy sucks, and you have the pandemic, but under normal circumstances, be professional, try to stay as positive as possible, and practice before presenting yourself. Be dedicated, show up early, leave late and ask questions. If there’s somebody in your organization around a veteran person, you pick their brain and when you are with your peers. I can tell you how much you can learn from talking to other people.”

Handling a very rigid schedule, Sims has enjoyed immense support from his family. “2007 t0 2014 it almost seemed like I didn’t have any days off,” he said. “I would be in the final stages of the NFL season; we’ll be doing the playoffs, then some college hoops that would take me into mid-February, spring training to September 30, and I would pick up football, so I didn’t have a lot of time off.” I got cut loose by Westwood One after 14 seasons, and I was really angry about that, but it did me a favor because it made me slow down and enjoy life a little bit more.”

“My family’s been unbelievable; I was fortunate enough to beat prostate cancer, and it’s been five years on January 16th, Dr. King’s birthday; I had the operation, so it’s all good and knock-on-wood. My wife Abby and I have been married for 38 years, our oldest son Jared is 37, our youngest Jordan is 33, we got two granddaughters, and my parents have since passed. I got my mother-in-law; she’s in her 90s and still going strong down in Florida. The family has been unbelievably supportive through thick and thin.”