Recently, I had the opportunity to interview Maria Marino, Sports Reporter and Host of SNY-TV (SportsNet New York). Marino has strong ties to the tri-state area, specifically New Jersey where she earned an Associate’s of Arts Degree in Communications at Sussex Community College and Bachelor of Arts in Communications with a Journalism concentration and Spanish minor from Ramapo College.

While attending SCC, Marino’s passion for journalism shined through as an editor of the College Hill online newspaper. She also worked as a field reporter, producer, and show host for ED-TV Channel 20. Upon transferring to Ramapo College, Marino continued to ripen her skills as a multimedia reporter/writer for the Ramapo Record and local radio station WRPR.

“I started my college experience at Sussex Community College and I really enjoyed that and had a great experience there,” Marino explained. “It was very cost effective for me as well and I was able to transfer to Ramapo College to continue that and get my bachelor’s degree. From there it was a launchpad whether it was a part-time job or freelance job that paid a little to nothing or just enough for me to get to that step up and look back on those experiences fondly.”

After graduating from Ramapo, Marino’s first job was with the New Jersey Herald as a sportswriter covering high school sports. Whether it was interviewing players and coaches, researching information and writing articles, Marino built up some solid fundamentals.

“I got to cover high school sports, my first job in professional journalism,” Marino described. “I was really into that, just seeing my name in the paper, bylines and writing a couple of days a week. I think to be successful in any media field you really have to have a good basis, a foundation of writing skills, and the ability to hone in on those. Make sure to be writing regularly and then to use that experience of going in person to games and being on the sidelines. It’s also important to approach different people, including coaches and players to conduct interviews. Using some people skills was essential for my growth.”

Over the next several years, Marino got the opportunity to work for various companies where she multi-tasked quite a bit, displaying the flexibility to cover events, write, edit, produce copy for print and broadcast and distributing content.

“Versatility is what I strive for, I just think it makes you better at your job and helps you understand all the other jobs that you get into,” Marino noted. “I think writing is just a foundation skill that serves you well and one of many facets of what we’re asked to do professionally. I did actually learn how to edit in college and carried that over into some of my first professional jobs outside of college. Shooting video as well is something I used to do, putting up content on YouTube for different employers and I just think when you have an understanding of how to do it, the people in those jobs appreciate you a little bit more and makes their jobs and lives a little easier.

Always whenever I was out in the field, and covering an event with whoever was shooting, I would really talk to them and make sure what they were getting so we could work more together. I care about all those details, framing of the shot, the lighting, and all the technical aspects.”

Marino expanded her horizons in the broadcast journalism industry, working on the radio side for WGHT Radio, NBC Sports Radio and SiriusXM. “I absolutely love sports radio and the media,” she said. “It will always have a special place in my heart, and I love the flexibility you have to talk about a wide range of things. They were really great experiences and definitely a grind for a while working at a few different places and couple of radio stations, but I cherished those experiences for how they helped me grow and I hope do more in the sports radio realm at some point.” 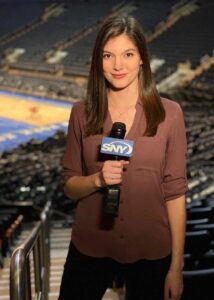 Maria Marino Joins SNY-TV – The Pinnacle of Her Young Career

The pinnacle of Marino’s career came three years ago when she joined SNY-TV as an anchor, host and analyst, anchoring SportsNite at 11 p.m. and working the sidelines for UConn women’s basketball.

“Anchoring our flagship sports recap show SportsNite at 11 p.m. and also have been privileged to cover UConn women’s basketball,” Marino noted. “I actually used to cover the men’s side at first, but I moved over to the women’s side when it became full-time.

Historically one of the best programs across all sports and that’s in large part due to the coaching staff led by Geno Auriemma and I’ve just learned so much from being around him. Just trying to tell the stories of that team to the best of my ability with accuracy and perspective because I admire those athletes so much and I want to do a good job of getting their stories across to our audience and SNY has had a great partnership with UConn.”

When it comes to working at SNY, there are tons of people that play a pivotal role in the set-up whether contributors, producers and various personalities. Marino cherishes working with all these people and the preparation that goes into the coverage.

“As far as the different personalities that come on, it’s been a great experience to work alongside them and the people that are full-time hosts and anchors with me as well as the contributors that come on to debate different topics and we’ve gotten to do a number of different shows and I respect them all of the contributors in what they bring to the programs. I love we can share some opinions in our shows and I just respect all the knowledge that they bring to the table.

I’m so thankful for the team at SNY and the producers I work with because there’s a lot that goes on behind the scenes and everybody plays a part and I need all of those pieces to put together a good show. Working with different people and presenting ideas and bouncing things off and talking them out and how we think things are going to go. I’m a big believer in news judgment and making sure we’re doing our responsibility ethically and telling the right stories and prioritizing in what needs to be discussed.”

“As far as the preparation each show requires a little something different, for SportsNite at 11 we come in hours in advance and I do a lot of work just writing the show with my producers and figuring out what we’re going to talk about,” Marino explained to In The Zone. “The preparation starts even before I walk in the door because working in sports you really just have to be tune to everything that’s going on, so I start my day brushing up on all the latest happenings and I’m doing my own research and reading and listening to different perspectives about all the topics of the day.

Covering the UConn basketball program is a different animal entirely and again it’s following all of the news and joining the press conferences for the coaches and players and asking questions and following my own leads and just reading everything I can. I like to identify a couple of different angles that I think are interesting, try to get some insider information on that and relay that through our pre-game show for each game that we do and started doing some digital hits this season.”

Having Role Models to Becoming One

Like anyone else having climbed the ladder in sports media, Marino has those she looks up to and is happy to now share her own advice with younger journalists.

“I remember Kim Jones as somebody who really did a good job in covering the Yankees and I would occasionally hear her a little bit later on WFAN and think wow she really knows her stuff. Holly Rowe is another one I would like to emulate when I work on the sidelines and I think she does a great job. I have gotten to interact with Michael Kay and Kevin Burkhardt who actually believe it or not started at WGHT and then went to SNY which is a similar path for me thus far.”

“I have gotten to build relationships with Chris Carlin and Mike Breen and kind enough to give me some time and connect me with Doris Burke for a phone conversation so all of these people I’m learning from are not only great at what they do and who I respect and admire and literally idolized but are also good people that they want to help others succeed and willing to be helpful to me at various points. I have gotten to work with Jeane Coakley, she is one of my idols and just think she rocks at life and covering sports and just a great person.”

When asked what advice she would pass on to young journalists looking to advance in sports media, Marino added, “My advice is be flexible, understand there’s not one path in this industry to be honest and nowadays get creative and use networking as much as you can. That means not connecting with people and asking for jobs or favors but having mutual beneficial relationships where hopefully you can showcase your work and you’re helping out others in the process because they need somebody that’s good at something that you know to do to.

Treat people generally with respect and more than anything else work, work, work because again your work will speak for itself and that reputation will follow you around and help you get to that next step and your knowledge and covering make that part of your daily routine. Just read, follow and listen as much as you can and develop a foundation of understanding whatever you’re covering.”

Most importantly to Marino is the support that she has received from her family.

“From the beginning of this journey, my parents were very supportive of me. They never thought my ambitions were too far-fetched and they never shot me down,” she explained. “They always encourage me; my father especially was a big sports fan and also someone who listens to sports radio and engages a lot in sports media and he really understood a lot of what I was trying to do. My boyfriend helps me day in and out and talking through different topics and understanding things.”

Watch the full interview with Maria Marino and others on the In The Zone YouTube Channel.