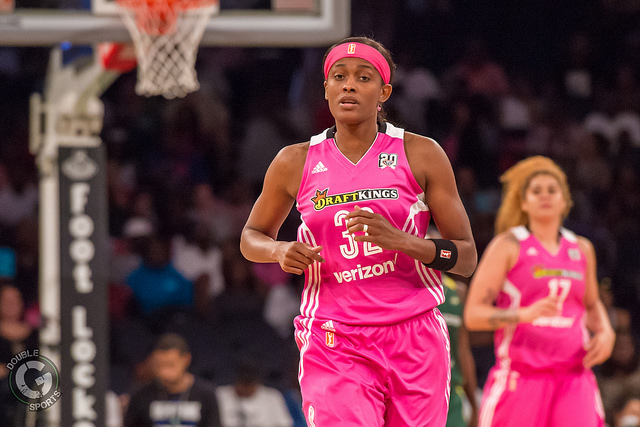 Swin Cash is back in New York with the Liberty. No, she is still retired and not looking back. Her legacy as a championship level performer in the WNBA is secure. As a matter of fact, Swin was just getting used to her new role as a member of the media participating in game broadcasts and hosting programming shows.

But after talks over the years with several people, including Senior VP of the New York Liberty, Kristin Bernert, about having the aptitude to run a front office job, she listened but really didn’t envision the idea.

“I never really paid a lot of attention to it,'” Swin reflected. “It was one of those things that you hear about but you don’t know if it could be possible.”

Things got serious when she spoke to Isiah Thomas, who made it clear that she should take a look in this direction. Cash was even offered a position during last season but she had to mull it over.

“I just decided this would be an opportunity for me to get my foot in the door,” Cash admitted. “Not only to learn, but I thought I could bring a lot of value.”

The New York Liberty disclosed how much value Swin has to the organization by creating a first-of-its kind position as Director of Franchise Development.

“I’ve always felt that if you’re going to do something outside the box, you can create other opportunities for women so teams can see this is a place for WNBA players when they retire.”