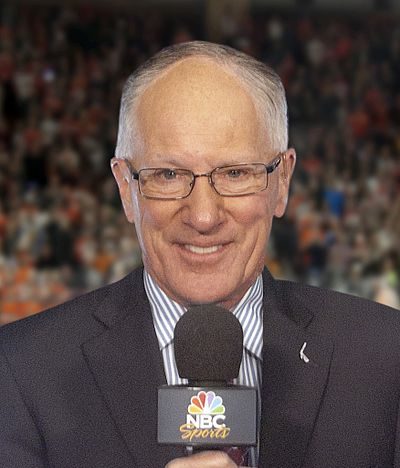 This file is licensed under the Creative Commons Attribution-Share Alike 3.0 Unported license...Attribution: Centpacrr at English Wikipedia

The End Of The Mike ‘Doc’ Emrick Era

Longtime NHL announcer Mike “Doc” Emrick is retiring as a broadcaster. He has called 3,750+ Professional and Olympic hockey games and 22 Stanley Cup Finals. Affectionately known as “Doc” for his doctorate in communications and known for using 100 different verbs used to describe a pass or shot, Emrick has been a staple in the NHL community.

“I hope I can handle retirement OK, especially since I’ve never done it before,” Emrick told the New York Post. “But I’ve just been extremely lucky for 50 years. And NBC has been so good to me, especially since the pandemic, when I was allowed to work from home in a studio NBC created.

“Now, into my golden years, this just seemed to be the time that was right.”

After 3,750+ Professional and Olympic hockey games, 100 different verbs used to describe a pass or shot, and 22 Stanley Cup Finals, the legendary Mike "Doc" Emrick has announced his retirement from broadcasting.

From hockey fans around the world, we say #ThankYouDoc! pic.twitter.com/Pt27Dp63TW

Doc won eight Sports Emmy Awards for play-by-play, including seven straight from 2014 to 2020. He had stints at ESPN and ABC as well as Fox and CBS and at six Olympic Winter Games.

In 2008, Emrick was inducted to the Hockey Hall of Fame, which awarded him the Foster Hewitt Memorial Award for outstanding contributions to hockey broadcasting.

“When you have a job like that, you’re never working the rest of your life,” Emrick said last year, pausing to explain why he takes time to talk to anyone who approaches him for a conversation, photo or autograph. “I always do because I’ll miss it when it doesn’t happen.”

“The risk one takes in saying something about Doc Emrick is that you know he could have worded it better himself — on the spur of the moment, with 20,000 screaming in his ears (or up to 105,000 in the rain, snow and/or bitter cold), to a national broadcast audience relying on him to get it just right,” Bettman said in a statement.

“It has been a privilege and education on hockey’s biggest stage to have sat next to Doc for the last 14 years,” NBC color analyst Ed Olczyk said. “I will miss his stories, his preparation, his play-by-play, his friendship and our dinners on the road.”

While Doc will no longer being doing play-by-play, he will continue to write and narrate video essays as part of NBC Sports’ NHL coverage.

“Things change over 50 years, but much of what I love is unchanged from then to now and into the years ahead,” Emrick said in a statement. “I still get chills seeing the Stanley Cup. I especially love when the horn sounds, and one team has won and another team hasn’t, all hostility can dissolve into the timeless great display of sportsmanship — the handshake line. I leave you with sincere thanks.”

Who would you like to see replace Doc as the lead play-by-play man on NBC? Let us know!

Conor McGregor Vs. Dustin Poirier At AT&T Stadium? Jerry Jones Is All For It
Sports Betting Is Booming; NJ reports record-setting month