Tina Charles is once again, a New York Liberty and WNBA All-Star 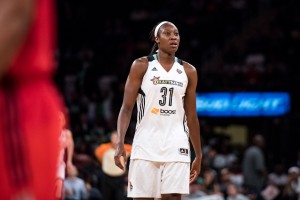 The New York Liberty are now seeing their fortunes rise since they left for an extended road trip a mere .500 team two weeks back. Now standing at 7-5 and recently the recipients of an extended ten game package by MSG is proof that the Liberty suddenly are the attraction in the WNBA. Tina Charles is a big reason for this perception.

Charles was named a Boost Mobile WNBA All-Star for the fourth straight season, second with New York. She recently joined the 3,000 club, the tenth quickest ever. There are only 48 players ahead of her in total points in the league and at 28 it’s a good bet that provided Charles stays healthy that she will leave the WNBA on top of that list.

Tina, a former MVP, is starting for the Eastern Conference this year, and her 6, 129 votes is testament to why her third place tally in overall selection signifies why New York is the team of the future. “Obviously Tina has been our main weapon this season” New York Liberty Head Coach Bill Laimbeer proclaimed, “I think she is playing at a high level, she overcame some adversity during a small stretch in the beginning of the year, and is playing really well.”

Charles is seventh in scoring this year, 16 .2 points per game strong and fifth in boards with nearly nine a game. On and off the court, Tina Charles has been a popular figure in the league, running her charity that half her salary feeds currently. But the news of her selection still holds a special place with her. “I think it’s a blessing. To become a starter, that means that people voted, they recognize your game, what you do for your team, and who you are as a person, how you are in the community. To be named an All-Star is pretty great.” Charles beamed

Contrary To What Many Believe, Phil Jackson’s Off-Season Has Been A Success For Knicks
New York Liberty the Stars in Matchup with San Antonio