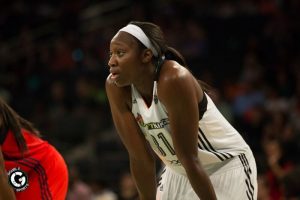 New York, NY – The dream of an WNBA Championship suddenly got harder for the New York Liberty. The Washington Mystics came into Madison Square Garden with a carefree attitude, except in their play.

The New York Liberty, top seed of this year’s playoffs, appeared a step behind all night long.

Game One of the Eastern Conference Semi-Finals was quite a contest, going into two overtimes, a home sellout crowd of 10,120 tried to will their team to victory.

However, New York, with three starters who played 40 minutes, appeared weary as the night went on. Washington returned home with a 1-0 lead in this best of three series after an 86-83 win, their fourth win in five games against New York this season. “We haven’t been intimidated by playing here because we had some success earlier in the year and I think that helped us.” Mystics Coach Mike Thibault explained.

The Liberty started out well, riding the scoring of Tina Charles, Epiphanny Prince and Carolyn Swords. They shot 52% to Washington’s 23%. The Liberty used a lot of energy shadowing Mystic guards. But the strain on their defense told as the night went on. The Mystics stretched the Liberty defense to its limit as Natasha Cloud and Ivory Latta, consistently lost Liberty defenders on the dribble and New York got caught up either switching slowly into mismatches or just plain losing them as they collided with their own players leaving gaps for the likes of Emma Meesseman and Stefanie Dolson to outscore New York in the paint, an area they won 36-26. “It was kind of physical, but we knew that before the game.” Meesseman pointed out in the post-game, “We knew that they were really tall, physical, and strong inside. So it was really up to us to fight back.”

The Liberty attack centered around their best two scorers: Tina Charles and Epiphanny Prince, who kept New York in the game as they were able to rally to tie the score at the half as the Mystics threatened to open it up at a couple junctures.

But a viewer got the sense that New York needed to increase the intensity and this is where the loss of Brittney Boyd showed.

New York Liberty Head Coach Bill Laimbeer, who collected his WNBA Coach of the Year honor, didn’t play Erica Wheeler and the only bench player he committed to fully was Kiah Stokes who collected nine rebounds.

The game was still up for grabs as New York took a one point edge into the fourth. The game took on an action-reaction feel.

Every New York attempt to put the nail in was countered by a response from Washington. There were 23 lead changes and 14 ties in this contest. Control was fleeting throughout. Tanisha Wright (13 points) nearly dragged the Liberty to victory as she drove for hard fouls, and was involved in every big play in the fourth.

However, the hot hands of the Liberty centered around Charles, Prince, and Swin Cash. Tina Charles appeared to have broken through scoring on a running hook and a foul which with the three point play put New York up 67-66 with 56 seconds left. Charles struck again and with New York up three, Ivory Latta emerged again, like a recurring nightmare, draining a three with 27 seconds and overtime would be needed. “Coach drew up a great play,” an excited Ivory Latta said afterwards, “We ran the play, I saw that a defender wasn’t there, so I just took my time and focused on making the shot.”

After Latta hit a three to push Washington up a point, New York made its second major claim to victory as Tanisha Wright buried a twenty footer and then Prince (26 points) hit one from right of the key to make it a three point lead. Swin Cash hit one of two from the line and with 46 seconds left, New York was up by four. But Washington refused to be put to sleep. Taylor Hill drew a foul and hit both and then Kara Lawson found Meesseman for a layup with 1.6 seconds remaining and a second overtime was needed. Mike Thibault shared what he told his team at that point. “I said we’ve been here a long time we might as well win it, might as well since we’ve come this far.”

Tanisha Wright started the second overtime with a three from the corner. However that’s where the story ended as New York made bad decisions in the following possessions as the Mystics broke away to take an 85-80 lead. Prince three with one second left was only window dressing. Home court advantage was stolen and now it will take a victory in Washington to bring it back to New York Tuesday. Laimbeer had the look of a man who knows what it’s going to take now. “No one said that it was going to be easy. We got beat at home, now we have to win on the road.” Laimbeer explained postgame, “We’re the best road team in the league, now we just have to show it.” Tina Charles, also on hand for the postgame supported Laimbeer’s point about the strength of all WNBA competition. We knew things wouldn’t always go our way.” Charles shared, “We always had to battle and fight; nothing has come easy for us, so we’re going to keep going.”

Liberty in an Empire State of Mind as Playoffs Arrive
Liberty Goes Deep To Pull Out Game 3, Advance to Eastern Conference Finals