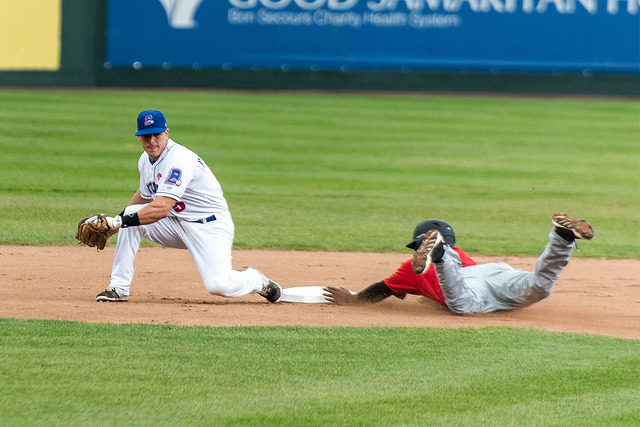 Three years ago the Rockland Boulders and New Jersey Jackals battled until the very last regular season game with the Boulders capturing their first pennant at what used to be called Provident Bank Park. In the championship series, New Jersey charged out to a 2-0 lead only to see Rockland win four straight for their first Can-Am League Title.

Last season, the Jackals returned the favor, sweeping the last three games of the regular season at Palisades Credit Union Park. However, New Jersey was eliminated in the first round of the playoffs while the Boulders rallied from an 0-2 deficit against Quebec before suffering a stinging defeat in the championship series against Ottawa after winning the first two games of the series. Now, both franchises renew their fierce rivalry in the semifinals of the Can-Am League Playoffs.

New Jersey won the season series 11 to nine, winning seven times at Palisades Credit Union Park while the Boulders registered six victories at Yogi Berra Stadium. Scoring was not an issue as both teams’ combined for 231 runs while averaging near six runs per game.

“Both teams’ can put up some runs and pitch,” said Rockland Manager Jamie Keefe. “It’s going to come down who makes the pitches at the right time. They run the bases every well and you play 100 games and it comes down to five. We just need to worry about going each and every day and play to the best of our ability and make the plays when we can.”

Rockland broke the league home run record this season, slugging 115, while the Jackals knocked 84 out of the park. The Boulders swiped 124 stolen bases with Dylan Tice, who was named a Can-Am League Postseason All-Star, leading the league with 32.

New Jersey’s centerfielder broke Maloney’s league record of most runs scored in a season with 95.

New Jersey underwent some roster changes during the middle of the season, adding Joe Dunigan who played for the team back in 2014 bashing 27 home runs and 71 RBI and Art Charles in 2016 leading the league in hitting with a .352 average along with 29 home runs and 101 run batted in.

“The maturity in the middle of their lineup is what is going to carry them in Burgamy, Dunigan and Charles and difficult one to get through,” Keefe said. “Again good pitching beats good hitting and that is the case here. Both teams have a lot of thump in the middle of the lineup and we probably have more thump but I don’t think the long ball is going to win this series but defense and base running. When we take advantage of their pitching and same goes for them against ours and if we can win that battle which is probably most important one.”

“We get a league record with 40 errors and that is probably most impressive and our team defense has gotten us here and we have to go out and make the plays and pitches if we are going to win this series and don’t going home early. Bur gamy is a seasoned hitter, 36 years old and knows what he is doing.”

Switching to the pitching, Rockland is led by first-year starter Justin Topa who led the league in victories with 14 and Markus Solbach recording 11 wins while leading the team in strikeouts with 95. Bo Budkevics went 6-3 this season. In addition, the return of Richard Salazar (5-3) and David Fischer (3-1) have bolstered the rotation along with Mayckol Guaipe (14 saves) to the bullpen.

The Jackals are led by veteran Issac Pavlik’s  10 wins, 99 strikeout season.  He was also able to register his 1000th career strikeout and 100th win during the season. Other starters that have made significant contributions are Lee Sosa with nine wins and 107 strikeouts, David Richardson (7-4) leading the team in strikeouts with 119 and Andres Caceras six wins and 93 strikeouts.

Owning the higher seed, Rockland (64-35) has home field advantage over New Jersey (55-45) in the best of five series. Games 1 & 2 will take place at Yogi Berra Stadium in Montclair before returning to Palisades Credit Union Park for Game 3 and if necessary Games 4 and 5. This season, the Boulders chalked up a 35-19 record at home.

“The goal is to make sure we hit last and last two years hasn’t come true for us and got it again this year and important,” Keefe said. “I will put this lineup one through nine against anybody and don’t know how many walk-offs and comeback wins we had in the 7th, 8th and 9th but important times in the game to get it done and most successful and have to continue to do that. This is our ball park and know how to play here as well as win over there.”