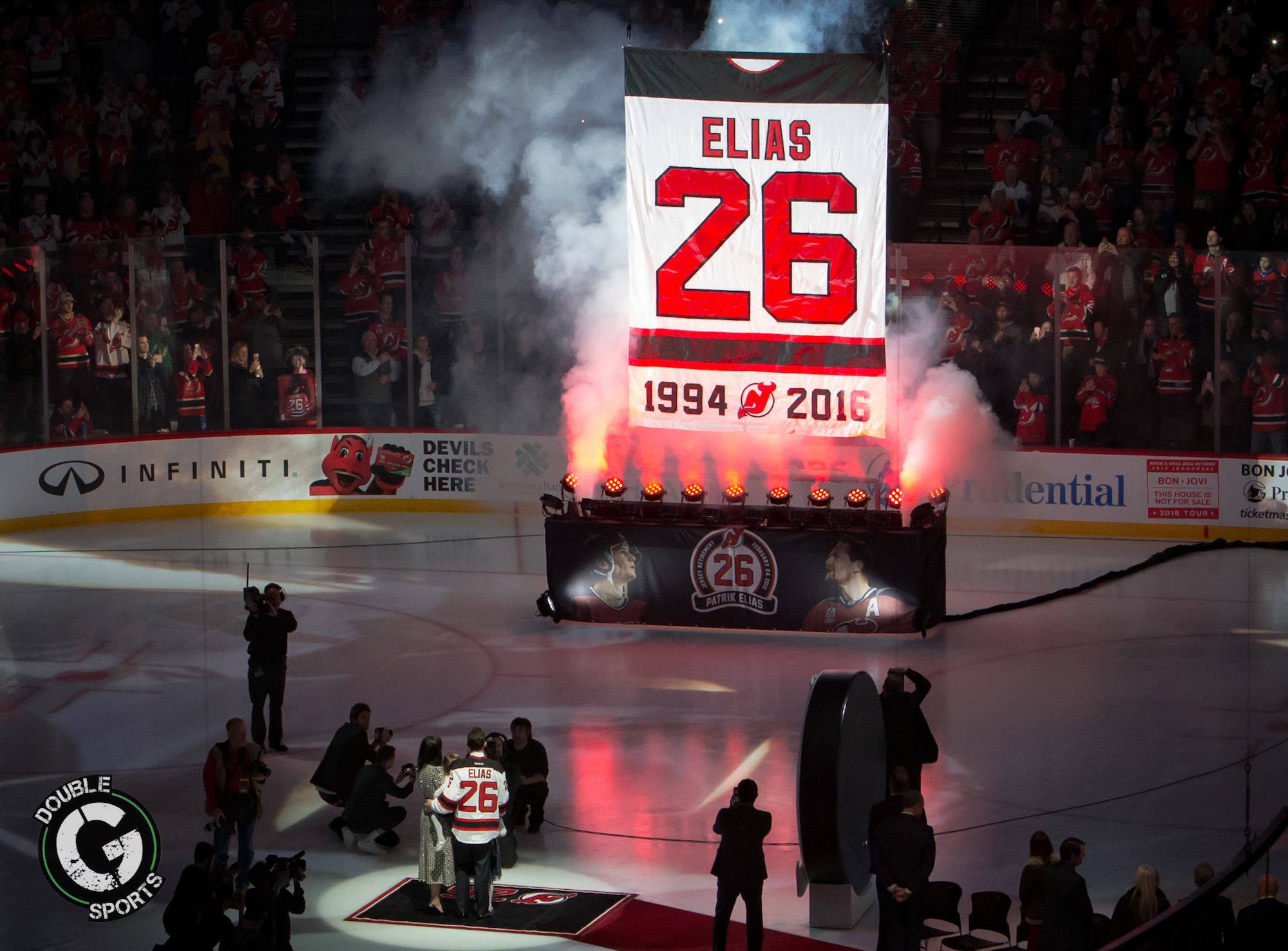 For the last couple of years, it seems that every major New Jersey Devils moment is accompanied by rain.  Patrik Elias Night was no exception. On Saturday night, in front of a sellout crowd, #26 was hoisted into the rafters.  Elias is the fifth Devil to have his number retired, he joins former Captain Scott Stevens, Devils fan favorite Scott Niedermayer, Current Devil Announcer Ken Daneyko, and arguably the best goalie of all time Martin Brodeur.

An understandably emotional Elias looked on with his family as his number rose from the ice to take its final position atop The Rock.  Patty will forever be a Devil!

After the festivities concluded it was time for the Devils to face their bridge and tunnel rival, the New York Islanders.  Both teams clinging to wild card spots in the Eastern Conference.  Both teams in a losing slump.

The Islanders are where they were most expected to be (in playoff contention) the Devils are a Cinderella story.  The young team sprinkled with veterans has become a legitimate threat to make the post season.

Elias also had a streak attached to it.  On nights where a Devil number has been retired they were a perfect 4-0.  The Devils definitely exhibited first period jitters that might be attributed to the streak and gravitas of the night.  There was no real standout from the first period on either side of the ice.  The only notable moment in the first is that newly acquired Devil Michael Grabner took the ice in #40, which Blake Coleman had given to him as he is a senior player (Coleman will now sport #20).

In a picture-perfect play Jordan Eberle, assisted by Mat Barzal and Anthony Beauvillier, snuck one past Keith Kinkaid.  This goal pulled the Devils faithful out of the game.  It seemed as though the Islanders controlled most of the second period until the last 5-6 minutes.  In those last minutes, they were unable to register any shots on goal and the Devils took advantage of this momentum change.

Kyle Palmieri is First Star for a Reason

The third period of this game could have easily been called the Kyle Palmieri show.  He scored both of the Devils goals with assists by Taylor Hall and Sami Vatanen respectively.  The entire Prudential Center was pulling for a third goal from the star each time he skated onto the ice.

While the Islanders tried late in the third by pulling goalie Jaroslav Halak it was all in vain as the fell short 2-1.  With this win, the Devils snapped a losing streak that had started earlier in the week against the Columbus Blue Jackets.  It also brought their retired number streak to 5-0.

Monday Cory Schneider will participate in a full practice with the team.  After practice he will meet with John Hynes and the rest of the coaching and training staff to evaluate how he feels.  This determines if he will be back in the line-up Tuesday night against the Pittsburgh Penguins.   The Pens lead the Devils in points by 4 and occupy the 3rd spot in the Metropolitan Division.  Marcus Johansson is still sidelined with his second concussion that was sustained in January when the Devils played the Boston Bruins.