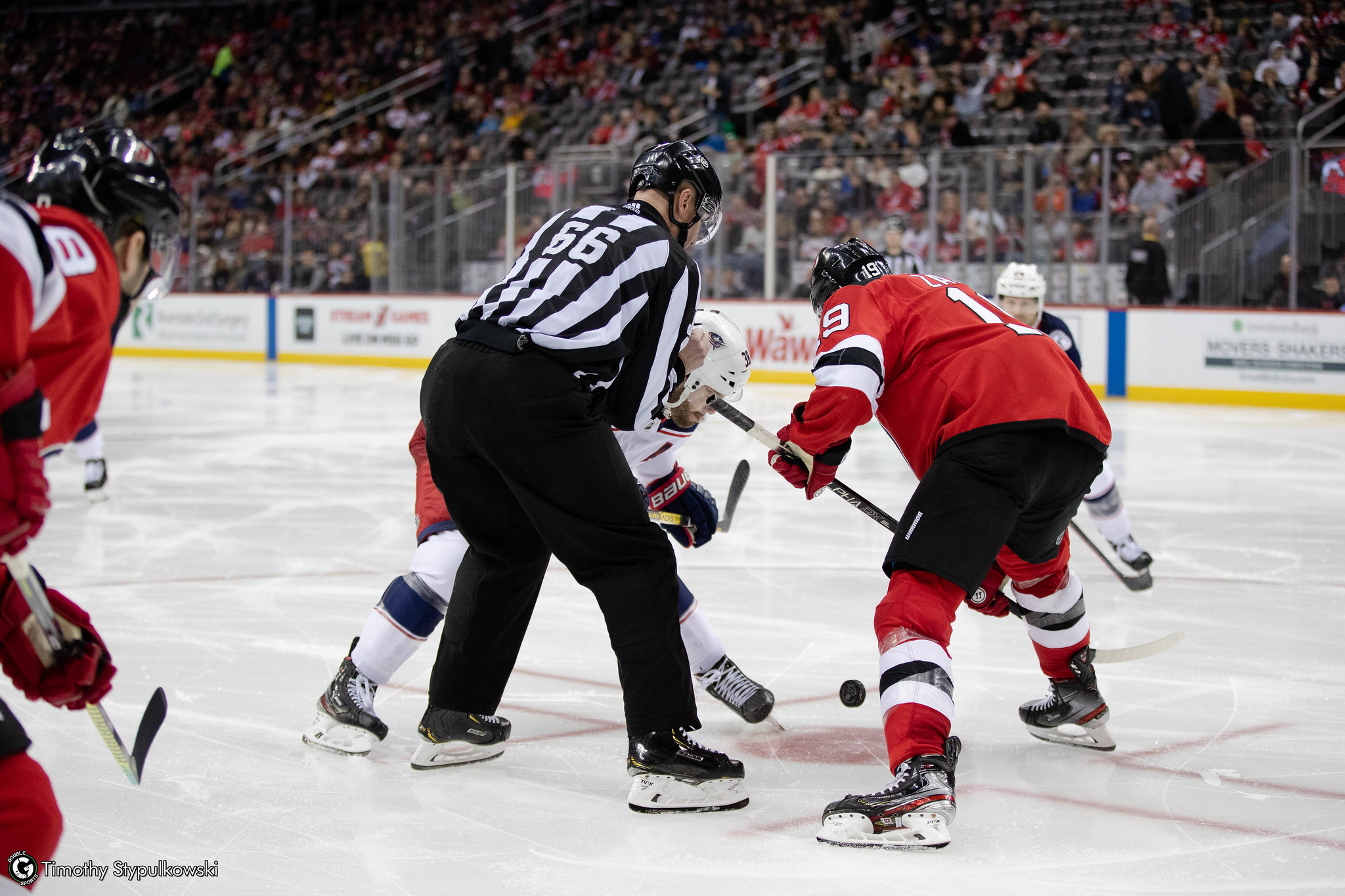 What a day it was for the New Jersey Devils.

Taking on the Columbus Blue Jackets was a hard-enough task. Having to play the game hours after losing both Andy Greene and Blake Coleman via trade almost ended the game before it started. However, the Devils had plans of their own.

After yielding two early goals and trailing at the end of the period, the new-look fourth line breathed life into a seemingly sluggish Devils team that was playing their third game in four days.

Just over a minute into the second period, Devils forward Joey Anderson got the Devils on the board with his second goal in as many games. Shortly after, rookie forward Nick Merkley, who was acquired in the Taylor Hall trade with the Arizona Coyotes, scored the first goal of his career while tying the game. To make the moment even more special, Merkley’s father was in attendance.

“It doesn’t get much better than that,” Merkley said. “He’s put in so much work over the course of my career so its nice to repay him with that.”

The young guns on the fourth line have already developed strong chemistry with just two games under their belt. The trio of Anderson, Merkley and Kevin Rooney can generate offensive chances through grit and a relentless forecheck.

“It’s nice we’re building some chemistry, hopefully we can keep that going,” Merkley said. “It’s nice to get some production the last two games.”

With the game tied and eight minutes remaining in the middle frame, New Jersey’s first line came through with a beautiful passing play, ultimately leading to a Kyle Palmieri go-ahead goal. All three forwards, Jesper Bratt, Nico Hischier and Palmieri, were involved in the rush that saw the teams leading goal scorer record his 22 goal of the season.

With just over 11 minutes remaining in regulation, the Blue Jackets would tie it up on a goal from Kevin Stenlund. The score remained tied at three through the final 10 minutes of regulation and the five-minute overtime period and the game went to a shootout.

During the skills competition, both Bratt and Nikita Gusev were able to beat Columbus netminder Elvis Merzlikins. Backstopped by another exceptional performance by Devils goaltending Mackenzie Blackwood, the Devils were able to defeat their Metropolitan Division rivals. When it was all said and done, Blackwood stopped 50 out of the 53 shots he faced in regulation.

This game recap seemed a bit rushed for good reason. Last night’s game was shadowed by the moves made by Devils Interim General Manager Tom Fitzgerald. The trades that were made seem to serve as a symbolic white flag to the Devils season.

The first trade of the day was made with former general manager Lou Lamoriello and the New York Islanders. Fitzgerald sent former Devils captain Andy Greene to the Islanders in exchange for David Quenneville and a 2021 second-round draft pick. Greene, who came into the league as an undrafted free agent, was given a chance by Lamoriello in 2006. The 37-year-old defenseman played 13 full seasons with the Devils, serving the last four as captain.

The bigger trade that sent shockwaves through the Devils Army and the entire NHL was the deal between the Devils and the Tampa Bay Lightning. Fitzgerald sent fan-favorite Blake Coleman to the Lightning in exchange for 19-year-old forward prospect Nolan Foote and the Vancouver Canucks 2020 conditional first-round pick (If Vancouver misses the playoffs, it will become a 2021 first rounder). As much as it hurts to see players like this go, the returns for New Jersey were high. It is all about building around the young core pieces New Jersey has.

“We don’t need to start over. We’ve got two big pieces and you saw the other piece in goal tonight,” Fitzgerald said. “We have holes. My job, if it is my job, is to fix some holes.” It was an emotional day for the Devils players, and it showed in the locker room after the game. Both Blackwood and veteran Travis Zajac spoke of the impact their former teammates had on their careers.

Zajac, who has been with New Jersey since 2006, opened up about Green heading to the Island. “It’s tough. I’ve spent 14 years with him and it’s tough to see him go,” Zajac said. We’ll miss the poise; we’ll miss the leadership. It was all about the team for him.” Blackwood seemed to echo the sentiments of Zajac.

“Its really kind of an emotional day for all of us; we lost two big parts of our team,” he said. “Andy has been a leader in the room since I’ve been here, and I really look up to him. “I’ll miss [Coleman] for sure, we played in Albany and I’ve watched him develop into the man he is today.”

It was an emotional victory on an emotional night for the Devils, but management and ownership want to turn this thing around much sooner than later. The newly acquired assets help tremendously.

With Foote, New Jersey is getting a 6’4, 200-pound power forward with an elite-level shot. His size helps him protect the puck in dangerous areas which in-turn helps generate offensive chances. He is not going to burn anybody with his speed, but his skating ability is vastly underrated. Adding Foote to a team that already has Hischier, Bratt, Blackwood, Jack Hughes, Ty Smith, Jesper Boqvist, among others, will expedite the process. It’s tough losing leaders and fan favorites like Coleman and Greene, but there seems to be light at the end of the tunnel for Devils fans.

With the Lightning deal, New Jersey has the potential to own three (3!) first-round selections in what is being called the deepest draft since 2003. If that pans out, the likelihood of the Devils using all three selections is slim. Look for Fitzgerald to make moves that will bring young, NHL-ready players to New Jersey for immediate impact.

The season may be lost, but there is still much to get excited for in the coming months for Devils fans.