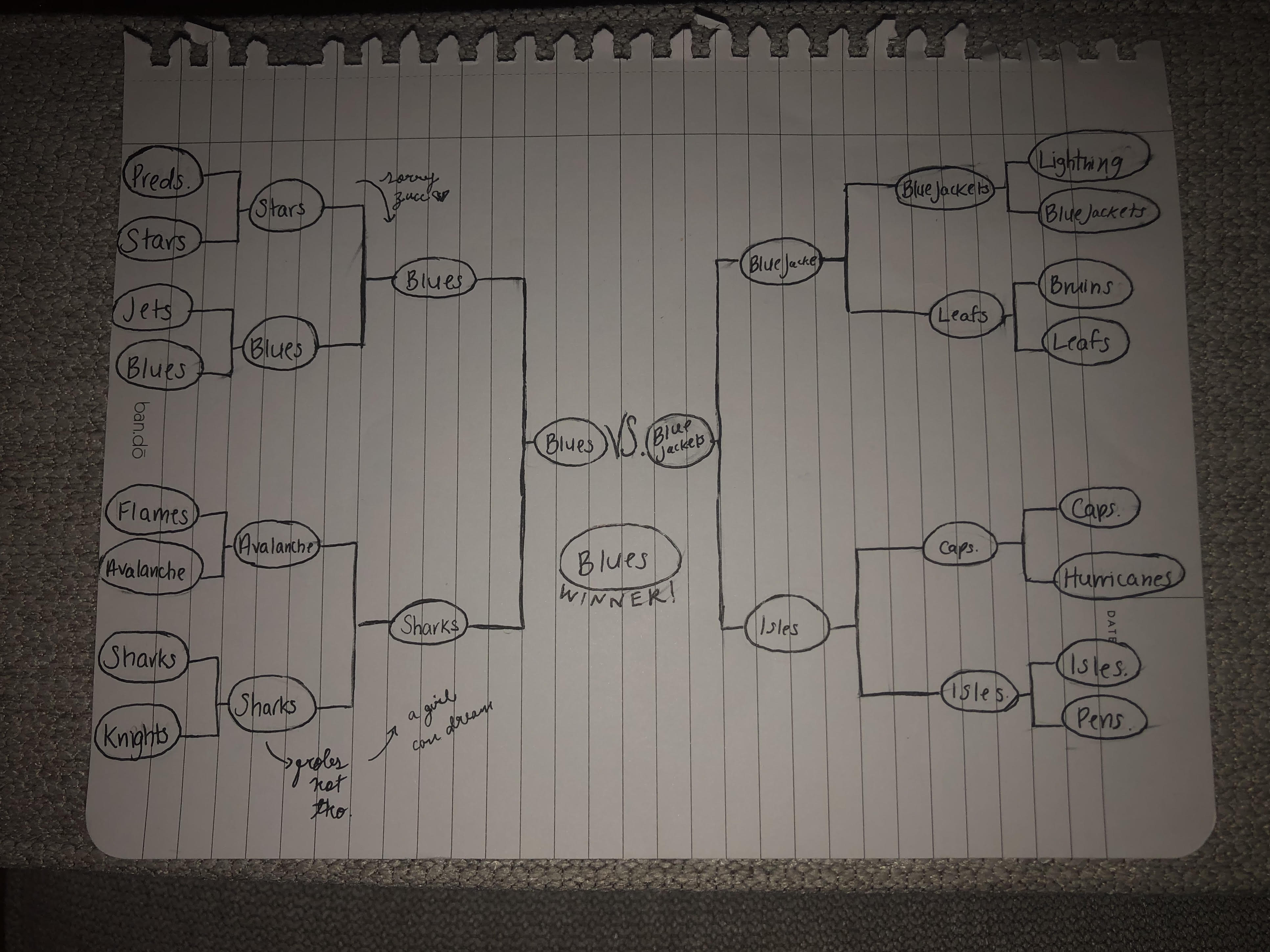 Getting the last laugh – a well predicted NHL Playoff Bracket

As a New York Ranger fan, the start to the 2018-19 NHL Stanley Cup Playoffs wasn’t as exciting as I’d hoped it would be. Due to the Rangers current rebuild, making Stanley Cup predictions hadn’t crossed my mind.

I didn’t have an answer. I was too busy sulking about the Rangers that I had forgotten that I wasn’t just a Ranger fan, I was a hockey fan. I couldn’t stop thinking about the question.

Upon returning to my college dorm room, I decided to put all my schoolwork and other responsibilities aside, rip a loose-leaf sheet of paper out of my notebook and grab a pencil and pen. I sat at my desk reading predictions online, looking at stats, and watching clips of old games for hours, most likely driving my roommate nuts. 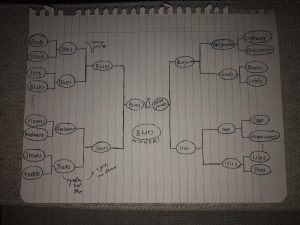 I turned to my roommate and said, “I’m finished. It’s St. Louis. Mark my words, the St. Louis Blues are taking home the Stanley Cup this year…but if I’m wrong, please don’t tell anyone I said that.” I even outlined my pencil sketch in pen to finalize my work, there was no turning back.

I have a hard time describing my thought process while making my bracket because I approached it in a way that most people have deemed unconventional. I didn’t base my decisions off statistics and standings. Of course I took them into account, yet they were not the center of my judgement. I made my predictions based on which teams I thought had proven their talent in conjunction with their on-ice chemistry.

There were many teams that had the talent and skillset to go far, however a team’s ability to work together can make or break their chance at hoisting the cup. Personally, I think the final series is a perfect representation of the reasoning behind my choices. Both teams had undeniable talent, but it felt like Boston heavily relied on their “perfection line”. The Blues on the other hand had key players like Ryan O’Rielly and Alex Pietrangelo making contributions while still playing as a unit, making it easier for their teammates to see the puck and successfully out-skate the Bruins.

Essentially there was no secret to how I made my bracket, it all roots back to my opinion. Many people were shocked to see that I had Tampa eliminated after the first round, while to me it seemed so obvious. It would have been nice to see the “Rangers South” as champions, however, it was just too predictable. They had the best record in the league, the curse of the former Rangers, and a lot of pressure. It seemed inevitable that they would choke.

My bracket is clearly not perfect, nor did I expect it to be, as you likely can tell by the little notes I made on it questioning my own judgement. I second-guess everything I do, so naturally I was worried that I completely missed the mark. Now however, seeing the outcome, I think it’s evident that the Blues see each other on the ice in a way that no other team in the NHL does. After all, everyone loves a good underdog.

At the very start of the playoffs, most people weren’t exactly receptive towards my bracket. When I showed the same person who first asked me which team I wanted to see win the cup, he assumed that I had only chosen the Blues to win because he had bet on the Jets. When I showed some guys in the library, they laughed and said thank god I didn’t put money on it, because I, “clearly don’t know anything about hockey considering the team I have going all the way had the worst record in the NHL back in January.” They then advised me that I should follow one of their leads and put money on Tampa or Vegas.

When I told a group of guys that I knew liked hockey my prediction for the finals, one of them responded, “Aren’t you a Rangers fan? Clearly someone likes the color blue.”

After round 1 had finished, I decided that I wasn’t going to let anyone steal my confidence. From then on, I kept my predictions to myself. I silently sat back, and watched both my bracket, and the Blues continue to thrive. Next thing I knew, I was watching game 6 of the Stanley Cup Finals in a St. Louis Blues hat. The game ended and to Blues fans dismay, the cup was now to travel to Boston for game 7. I wasn’t worried. I knew they had it in the bag.

Finally, in game 7, the St. Louis Blues took home their first Stanley Cup. I had been waiting for this moment ever since I filled in my loose-leaf bracket at my college dorm room desk. To those who doubted me, better luck next year boys.