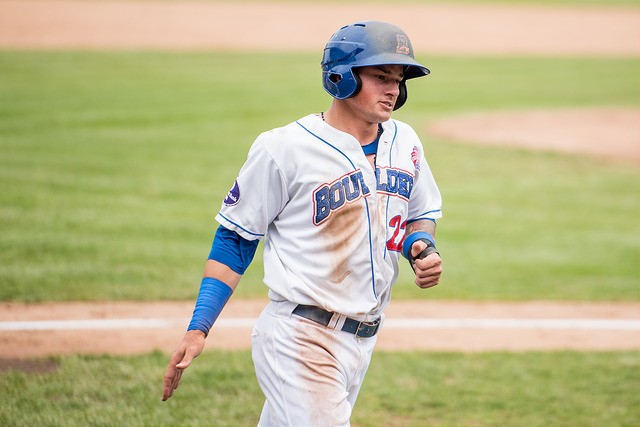 Although things did not pan out for Joe Maloney last season playing Double-A ball in the Minnesota Twins organization, the 2015 Can-Am League and Baseball America’s Independent Player of the Year said there would be no better place to come back and play than Rockland, for manager Jamie Keefe.

Maloney finished second in the league with 123 hits, 83 RBI and 33 doubles. Part of a group that won back-to-back Can-Am League regular season championships, including the first championship title in 2014 and franchise record 63 wins in 2015.

“A great ball park (Palisades Credit Union Park) and atmosphere that fits me well with my strengths and on how I approach the plan of hitting,” said Maloney. “We still have a lot of guys I played with before in Jared McDonald and Marcus Nidiffer and hopefully we can have another good season and championship. Playing in front of a great crowd and I know some fans that have reached out and connected with me through social media and looking forward to seeing them.”

“Jamie has done a great job at guys playing for him, setting up a good organization and getting the best out of the team,” Maloney continued. “I would love to call him a player’s manager and has been through the ringer playing baseball at a high level and end goal is to win a championship. He knows how to get guys to where they need to be that is affiliated ball. Jamie is good at figuring what team needs to be on the field to win and not the best player at that position he needs but best player that will fit into team aspect and where it needs to be.”

Maloney stated it’s important to have more experienced guys to teach the younger players on reaching that next level. “A long season for younger players and most games they have ever played,” he explained. “You have to know when to work and then take a break and relax so you don’t wear yourself out.”

Keefe on Maloney’s return to the organization, said, “Anytime you can get an athlete of Joe’s ability you have to be excited going into this season and after watching him two years ago and what he can do and play. He is back for a reason and knows the confines of Palisades Credit Union Park. He sees the ball really well and put up really good numbers.”

“He has a strong work ethic on a daily basis and tears it up in the batting cage and weight room,” continued Keefe. “He puts in the early running, defensive work during batting practice and long tosses to keep his arm length up. The small things and intangibles that he puts in.”

What else can go wrong for the (less than) Amazins
Mets sign RHP Neil Ramirez, place Asdrúbal Cabrera on 10-Day DL