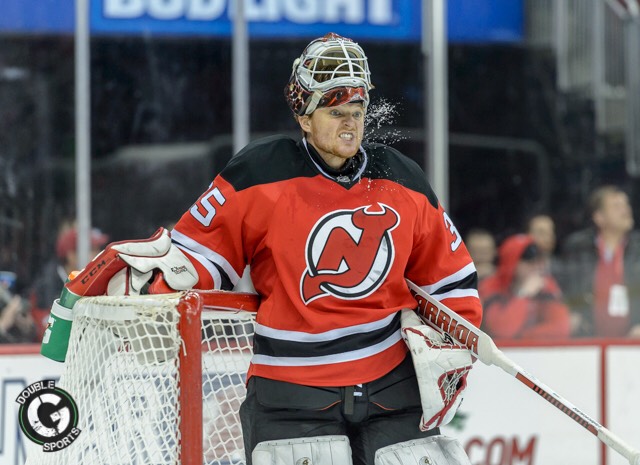 Let the Gaslight Anthem blare, the New Jersey Devils took a very chippy game 3 against the Tampa Bay Lighting.  I wonder, did John Hynes read my article? Whether he did or didn’t, the Devils proved they should be in the playoffs last night.  They came out of the gate with fire in their veins.  They played hard and fought hard against one of the top teams in hockey.  The Devils were a completely different team Monday night, they were the team fans had been watching all season.  All it took was a trip home to shake the nerves.

Marcus Johnasson started his first game since taking a nasty hit from the Bruins Brad Marchand in January.  While he did not register a point last night, his presence and skill drove his team.  MoJo effectively brought the puck to scoring situations and made his presence known.  Absent from the line-up was Grabner. There is no love lost in my opinion.  Let us be honest, he has no desire to be a Devil.  Now I know everyone is going to say well Taylor Hall did not look like he wanted to be a Devil when he first came.  Hall gave every game a good effort and made himself part of the team.  Grabner has not, not does he show any effort.

Mirco Mueller was also a healthy scratch from last nights game allowing Drew Stafford the start.  While I would have sat Vatanen over Mueller, this just shows why Hynes is the coach.  Stafford energized the Devils defense through his speed and ability to push the puck up.

The most noticeable change last night was Cory Schneider between the pipes.

He managed to get his first win since December 2017.  Cory looked sharp there was no denying it.  Even when his skates went out from underneath him and he could not get back up he stayed in the game continued to keep the Devils net free of Lighting shots.  I don’t think Keith Kinkaid is a bad goalie and in the regular season he was the right choice.  Kinkaid was the right goalie to start in Game 1 and 2.  Kinkaid just had a lot of jitters to workout.  These playoff games are the biggest games of his career.

Schneider has already had these jitters, he was Roberto Luongo’s back-up who was chosen to start over him during the playoffs in 2011 when Vancouver was in the first round.  That year Vancouver made it to the Stanley Cup Final only to lose to the Boston Bruins.  Schneider is the smart pick for Game 4.

I love old hockey.  Players played with intensity and physicality.  Yes the rules now are to protect them from serious life-long problems.  But, it is good to see a good old fashioned brawl every now and again.  The Devils did not disappoint in that department.  Brian Boyle played well, like the Brian Boyle.  He was made his presence known on the ice.  They also stood up for their teammates.  With a dirty hit to Nico late in the 3rd that was not called the Devils let the Lighting know they were not going to get away with hurting their rookie.  Couple that with elbow (which in my opinion was not intent but still happened) to Blake Coleman the pressure cooker boiled over.  There was a brawl that previous Devil teams would have shied away from.  This team stood their ground.  I read an article after the game by a Tampa reporter stating that the Devils were looking to fight because they know they can’t beat the Lightning.  Clearly he didn’t realize that by the time this fight happened the Devils had all but sealed up their win last night.

Taylor is the Devils MVP

There is no question that Taylor Hall is the MVP of the New Jersey Devils.  He is not trying to be the star, he knows it is a team effort.  Hall just happens to be the driving force behind the production of this team.  With his mastery of stick handling, ability to break away, and craftiness is scoring he has cemented himself as franchise player.  Devils fans will remember him with the likes of Scott Stevens, Patrik Elias, and Adam Henrique.  They were all hearts of the team.  The chants of MVP as he was given first start last night were well deserved and he should seriously be considered for the Hart Trophy.

The Devils play game 4 at the Prudential center tomorrow night.