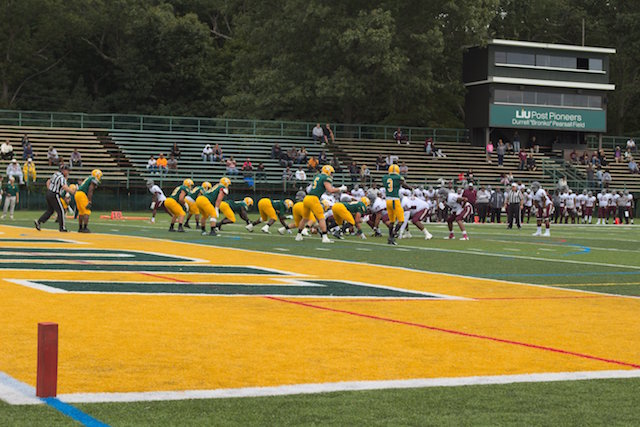 Pumped and ready to go, the No. 14 LIU-CW Post football team routed Virginia Union University on Saturday afternoon, 42-13, in a non-conference game at Bethpage Federal Credit Union Stadium in Brookville.

It was a rough start for the LIU Post Pioneers (1-0), who were held scoreless for the game’s first 15 minutes. But early in the second quarter, as tensions between Virginia Union and LIU Post started to rise, the Pioneers tied the game, found their momentum and never looked back. Senior quarterback, Yianni Gavalas (Manhasset, N.Y.), made it look easy as the Pioneers continued to score throughout the game to come out on top with a win.

“I feel great, my teammates made it real easy for me out there. The offensive line blocked well. The defense played really well. It’s just easy for me, makes my job easier,” Gavalas said. “I love the atmosphere.”

The Pioneers, who finished second in the Lambert Cup standings in 2016, set a new single-season record for wins (12-1), captured their second Northeast-10 Conference title in three years, and advanced to the second round of the NCAA Division II Championship for the first time, are looking towards building another strong season in 2017.

“I’m looking forward to playing this season, at camp we faced adversity and the way we faced adversity at camp, it brought us together,” said Jess Agbotse, Senior, DL (Hackensack, N.J.). “I’m proud of the way our offense produced. They went out there, they executed. They dominated the field.”

Head Coach Bryan Collins and The LIU Post Pioneers will return to the field next Saturday (Sept. 9) to face University of New Haven in their 2017 Northeast-10 Conference opener in West Haven, Conn. Kickoff is at 1 p.m.

Lori is a Staff Writer for Double G Media, with a main focus on events in the Tri-State area. She is also the LIU Post Football Beat Writer.