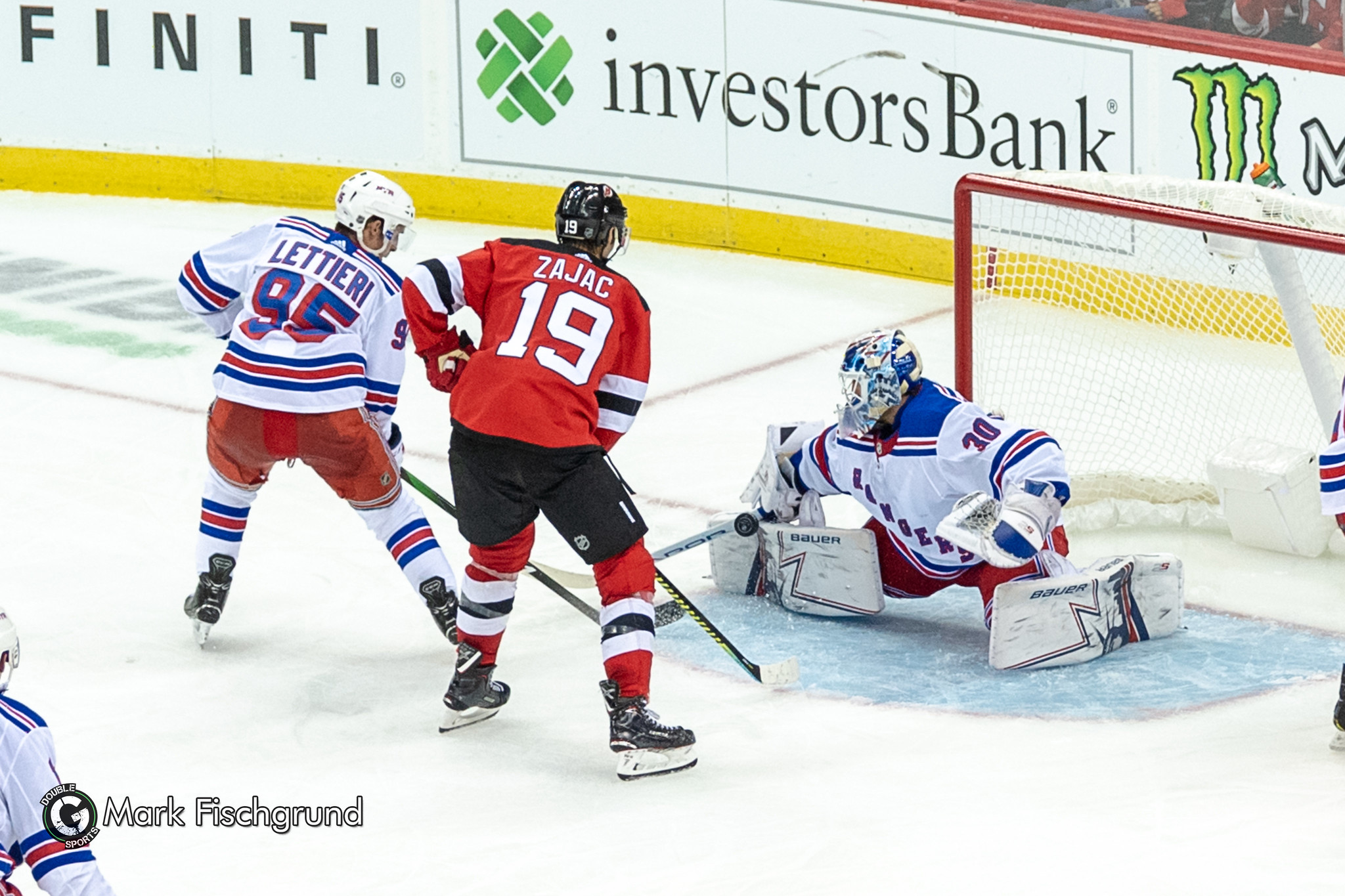 Many teams made offseason improvements, who will shine this season?

As the 2019-20 NHL season gets underway, the Metropolitan Division playoff spots are entirely up for grabs.

While Washington is a solid bet to take the division title again, most of their rivals improved rather steeply. Making headlines all summer was Ray Shero and the New Jersey Devils, as well as Chuck Fletcher’s Philadelphia Flyers and Jeff Gorton’s New York Rangers.

Starting at the bottom:

Great, awesome offseason additions to a big market team in a “rebuild”. Henrik Lundqvist is showing signs of age, though he played in front of a bad team last year. Not to worry– Alexander Georgiev showed great potential in his starts. Things should be just fine in goal.

And that’s precisely where it ends.

The Rangers dealt away Mats Zuccarello and Kevin Hayes last season, a sizable chunk of their forward crew. Adam Fox is a very good defensive prospect, but it’s not looking pretty on the blue line. The team is too weak at center to compete with some of the stronger teams in the Metropolitan.

At the end of the day, the Rangers have some must-see players regardless. They aren’t lottery-pick-bad like some other teams, but it’s probably a long season ahead of researching the 2020 Draft (a good one!).

It was a difficult choice to have New Jersey this far down.

If everything goes super, the Devils could be running for a wild card spot in April. That’s asking a lot of a relatively unsure goaltending duo. MacKenzie Blackwood looks like the real deal anyway, and solid play from him will propel the Devils up the standings. We just need to see a full season’s worth of performance, not only from him, but bounce-back candidate Cory Schneider.

As for the forwards, Jack Hughes probably isn’t going to light the league on fire immediately. The Devils’ depth on the wing is suspect, and he needs someone to pass the puck to. It’s possible he does get to play with one of the best shooters in the NHL, Kyle Palmieri.

Nikita Gusev, Wayne Simmonds, and P.K. Subban are all solid additions. They’ll fill much needed roles, though Simmonds’ best years are very clearly behind him. The same could be said about Subban, but he’s the clear “ace” on this defensive staff, a role he hasn’t truly had since his time in Montreal.

A full season of Taylor Hall could blow up this entire prediction. We saw during his Hart-winning season how he can literally drag the Devils into the postseason, and this team is better.

It’s hard to place them sixth after a great second place finish last season, but here they sit.

They didn’t take any major losses up front– this year, anyway. However, it’s not crazy to predict regression in a team that lost their starting goaltender to free agency. They’re relying on Semyon Varlomov now, who lost his starting role in Colorado last season.

The Isles have a passable top-six, but it falls off a cliff further down. The defense could be a question mark, but coach Barry Trotz clearly doesn’t care who’s back there. They’ll likely finish well in defensive statistics again, but offense could be tough to come by.

Mathew Barzal will be one of the most exciting players in hockey, but things will come back down to Earth.

Last year, Jarmo Kekalainen made a valiant effort, and pulled off one of the greatest upsets ever. The Jackets swept an all-time great regular season team, the Tampa Bay Lightning.

It was a respectable effort, but it cost them a lot of star power. Probably their two best players, Panarin and Sergei Bobrovsky, found new homes. Matt Duchene is in Nashville. Ryan Dzingle is with the up-and-coming Carolina Hurricanes.

That’s an irreplaceable batch of players, with no big names coming into Columbus to stop the bleeding. Seth Jones remains one of the best players in the NHL, and it’s now his team to carry.

In fact, their defense is a huge reason they aren’t listed lower. Jones is joined by Zach Werenski, Ryan Murray, and David Savard in the top-four. Whoever is manning the crease (likely 25-year-old Joonas Korpisalo) shouldn’t have too tough a time, though he has had his struggles.

Pierre-Luc Dubois will miss Panarin, but he’s due for a breakout with Cam Atkinson. Alexander Wennberg needs to be better.

UFA centers cost money, this just in, and Kevin Hayes cost a lot of it. Fortunately for the Flyers, he looked great in the preseason and is familiar with new coach Alain Vigneault.

Defensively, things may have shored up with the Matt Niskanen and Ryan Braun trades. They aren’t going to move the needle on their own, but with any luck, they’ll keep it from going backwards. Ivan Provorov and Shayne Gostisbehere need to find form again, and Travis Sanheim is offensively gifted.

The forward group is actually one of the deepest out there, should Nolan Patrick stay off the IR with his migraine disorder. Travis Konecny remains underrated, grading out as one of the top 5v5 goal-scorers in the NHL. Sean Couturier is going to make a legitimate case at a Selke (again), and Claude Giroux can drop a casual 85 points.

No pressure, but it is once again down to the goaltender, Carter Hart. This is his first full season with the big club, and he has Brian Elliott backing him up. Elliott had a bad preseason, to put it simply, and the Flyers are really counting on him to split time with Hart.

The Penguins are going to be carried by the usual trio: Sidney Crosby, Evgeni Malkin, and Kris Letang.

It remains to be seen which version of Matt Murray will come to the rink this week, but he finished very strongly last year. The Penguins need him to avoid the start he had in 2018, where he allowed 5+ goals in three of his first four starts. Things eventually did clean up, but every game matters.

The Pens have a quality forward group, even without Phil Kessel. Alex Galchenyuk should have a really good season getting minutes in the top-six. Crosby and Jake Guentzel are going to do their thing on the top line, and Malkin will be his usual dominant self. Jared McCann is a very good third line player.

On the back end, Letang will put up the points quarterbacking the PP1 unit. Justin Schultz and Brian Dumoulin are good defensemen, but the waters get murky in the bottom pairs. It isn’t bad enough to cost them a playoff spot, but GM Jim Rutherford has never been afraid to make a big splash. He would do well to shore up this defense.

They seemed to come out of nowhere, and they’re here to stay.

The Hurricanes just traded Justin Faulk and came away with his replacement (Joel Edmundson) and a pretty good forward prospect in Domonik Bokk (25th overall pick in 2018).

The Canes are deep down the middle, with superstar center Sebastian Aho, followed by newly minted captain Jordan Staal and Erik Haula on the third line. There’s a couple of really talented wingers, but no huge names to boost Aho’s numbers. Teuvo Teravainen has really excelled since being traded from Chicago.

For the fun bit, the Hurricanes boast what could rival Nashville as the best, deepest blue line unit in the NHL. Jaccob Slavin, Dougie Hamilton, and Brett Pesce are joined by the new free agent signing Jake Gardiner. Haydn Fleury will only get better.

Petr Mrazek has been up and down in his career, but he’ll be expected to start as the number one goaltender. He’s fresh off a .917 save percentage and a two year extension, as well as a trip to the Eastern Conference Finals.

Placing the Capitals first was the easiest.

They keep generally the same group of players, save for the Niskanen/Gudas swap.

John Carlson is going to get a couple of Norris votes again this year, and he’ll put up a lot of points helping Alex Ovechkin again. The Caps are going to miss Evgeny Kuznetsov at 2nd line center after he was handed a three game ban for some “inappropriate conduct”.

Their wing depth is good throughout, but Chandler Stephenson is not one of the league’s better 3rd line centermen. This depth is somewhat dependent on Tom Wilson not getting himself thrown out of games as the season progresses, but that’s been a challenge for him.

Braden Holtby is still an elite goaltender, and the Caps have one of the top goaltending prospects (and Holtby’s eventual successor) in Ilya Samsonov. Martin Fehervary, a 19 year old defenseman, seems poised to make his NHL debut alongside Radko Gudas.

They should win the division by a handful of points, but the Metro will be competitive, as it tends to be.

Rangers Reduce Roster, Sign Veteran Haley to 2-Way Deal
Not the Outcome They Wanted, but the New Jersey Devils Will Be Very Fun to Watch This Season