During the height of the COVID-19 pandemic in 2020, professional wrestler Zack Clayton headed to Jacksonville, FL to appear on All Elite Wrestling’s Dark show. His first match on the program against QT Marshall led to several others, including facing Colt “Boom Boom” Cabana and Sonny Kiss in September of 2020 and January of 2021, respectively. 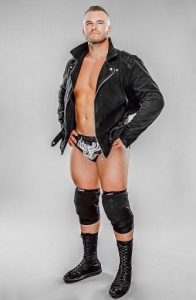 It’s no wonder that Clayton would begin what appears to be a striking new chapter in his pro wrestling career during a turbulent time period. Underneath the athlete’s cool, laid back demeanor is a courageous spirit always willing to bet on himself. A former football and baseball player, Clayton decided to go after his own wrestling dreams at the age of 19. His path to becoming a pro wrestler included seeking training under the tutelage of WWF Hall of Famer Johnny Rodz.

“He trains in Brooklyn. Gleason’s Boxing Gym in Brooklyn, where a lot of fighters train. So, I started going there so I could really learn the craft. I was 19, 20, 21,” Clayton tells In The Zone.  “[I] started doing shows…wrestling shows. Little independent shows. Most of the East Coast. A lot in [the] New York area. That’s where I grew up.”

Fast-forward several years later with Clayton not only becoming a household name due to his wrestling talent in the ring but also within the landscape of reality television and Hollywood. Clayton, who is linked to Jenni “JWoww” Farley of MTV’s Jersey Shore, gave In The Zone some insight into his girlfriend’s TNA iMPACT in-ring debut in 2010.

“It’s so funny because if you bring that up to her now she gets so embarrassed. She can’t even watch it, which I get, but it’s just so funny,” he explains. Still, Clayton highly approves of Jenni’s wrestling past, adding in support, “I love it. I think it’s so cool. I love that she did that.”

So what does the future hold for Zack Clayton? Well, at least for now in 2021, he would “love to be on TV every week.”

“That’s my main goal… and hopefully we can have fans back [into stadiums] by the end of the year,” Clayton begins. “I hope that that’s the case for everybody. All of sports and we can have concerts again and we can do things again.”

“I feel like we’re all just kind of… waiting. I feel like we’re waiting for something to happen. I think we just have to make our own things happen. That’s how I feel. We just gotta keep going and adapting. At this point, in 2021, whatever happens, happens and we just gotta flow with it. “

Zack Clayton’s star is poised to rise within the thrilling world of professional wrestling. To hear more about his experiences at All Elite Wrestling and working with AEW star Sonny Kiss, performing in front of small crowds, his childhood wrestling hero, wrestling critics, and much more, so check out In The Zone on-camera host Candace Cordelia’s exclusive video interview with the rising talent right here!