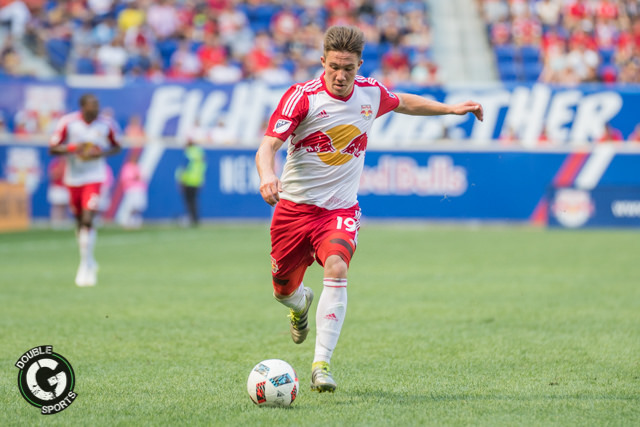 HARRISON, NJ — Despite not having a near full arena, the New York Red Bulls put in their best performance of the year in a 2-0 win over the Eastern conference leading Columbus Crew.

After play resumed following an injury seventeen seconds in to Crew loan-player Artur, the Red Bulls controlled possession and created multiple scoring opportunities in the first few minutes of play.

The Red Bulls found the reward for their early hard work via an Alex Muyl tap-in in the 11th minute of play. After Muyl celebrated his second goal in as many matches, the Red Bulls did not ease off on the gas, continuing to dominate Columbus and continued to apply pressure on the Crew goal.

In the 35th minute, the Red Bulls cracked the backline of the Crew again, as Bradley Wright-Phillips was brought down in the box, earning a penalty for the home side. Instead of Wright-Phillips taking the penalty, Daniel Royer stepped up to try and put the home side 2-0 up.

It turned out to be a good decision as Royer smashed home his second of the season, as his power strike into the left side netting was too much for Crew goalkeeper, Zack Steffen, to handle.

What Does Marsch Make of Tonight’s Win?

Sticking true to his colors, Red Bulls manager Jesse Marsch hooted and hollered all game long, not letting his side let up the pressure on the Crew. Following the match, Marsch was as calm as you like, illuminating happiness from his demeanor following his side’s victory.

“Eight games under our belt, I feel like we are getting to the point in which we see ourselves getting better everyday,” said Marsch. “I feel like we took another big step forward today.”

Despite moving up in the table tonight, Marsch was quick to point out that one result does not dictate the overall dynamic of the team.

“It’s not about one or two results, it’s about over time having the process of committing to get better.” Marsch’s side did that tonight, proving to learn from their mistakes in previous matches that cost them vital points.

Next up for the New York Red Bulls is Bastian Schweinsteiger and the red hot Chicago Fire on  “Autism Awareness Night” next Saturday night at Red Bull Arena.

Like Marsch said, the Red Bulls are getting better and better every week. It’s now up to the team to string together a few victories to back up their coach’s encouraging words. If they don’t perform well, the inconsistency of the Red Bulls season will continue.

Who Will Fill at Left-Back for NYCFC with Matarrita Out?
Can Vieira Finally Beat Kreis? NYCFC v. Orlando City SC Match Preview
Posting....