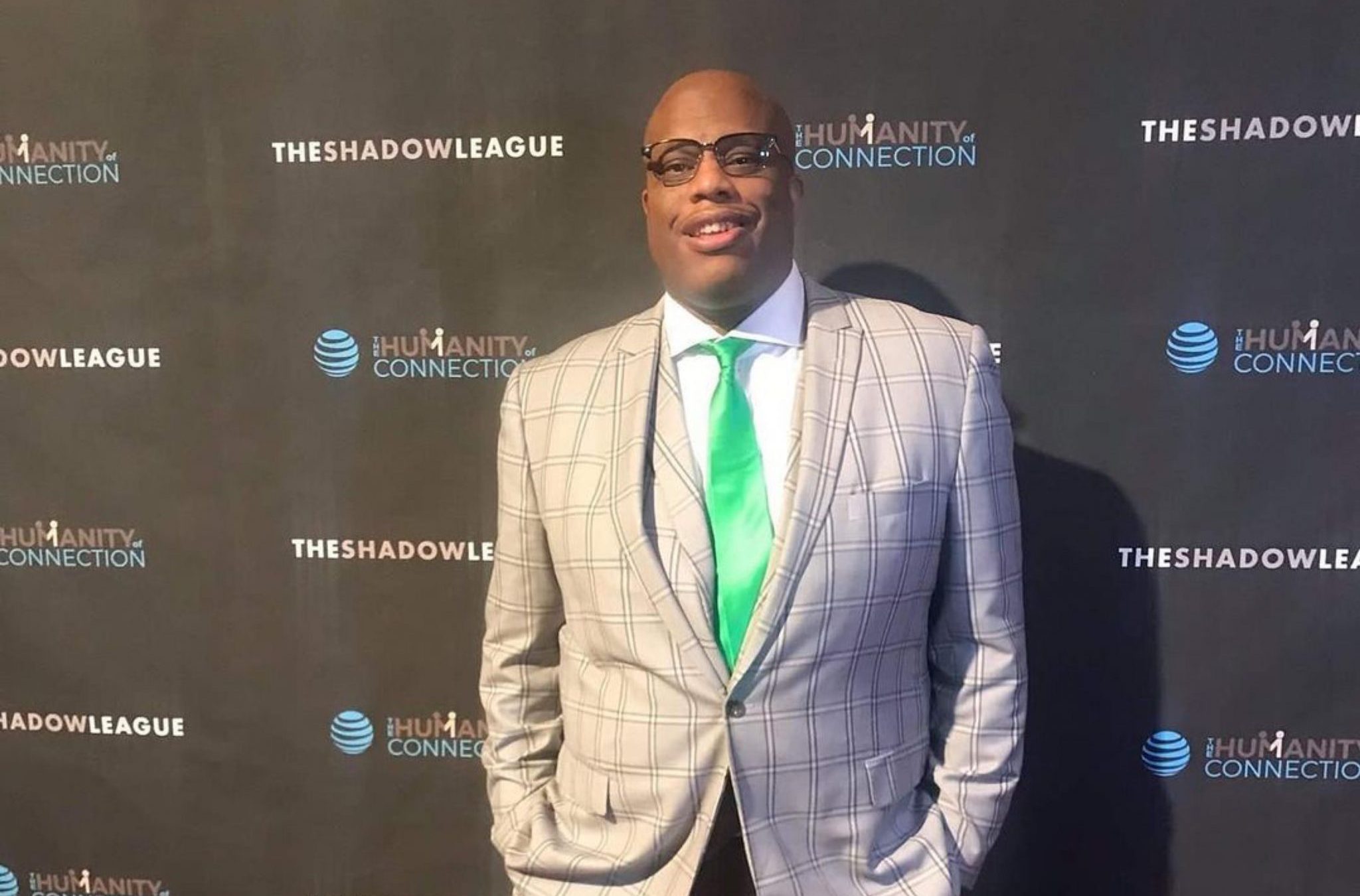 Growing up in Northern New Jersey and New York City, Brandon “Scoop B” Robinson quickly discovered an interest in basketball at a young age. His introduction to the sport came along with working in his family’s shoe businesses: Men’s Walker and Athlete’s Foot in Harlem, New York.

“My experience in New York City prepared me,” Robinson explained to In The Zone. “Seeing Hakeem Olajuwon, Dominque Wilkins doing sneaker releases and having conversations about jazz music with Dizzy Gillespie… Seeing people like Mike Tyson and Wayans Brothers walk into the store and buy shoes.”

By the time he was 12 years old, Robinson was co-hosting a radio show called Nets Slammin Planet with former New Jersey Nets player Albert King and Evan Roberts. It was only his first taste at journalism and content creation.

“Nets Slammin Planet was cool. I did that for two seasons,” said Robinson. “Going to visitor’s locker room and building bonds and relationships with Allen Iverson and Tim Duncan [was awesome].”

After attending Seton Hall Prep High School for one year, Robinson transferred to Don Bosco Preparatory High School for his remaining three years, where he was the sports editor of the ‘Ironman’ newspaper. During this time, Robinson worked on improving his skills by attending the Bruck Beck and Ian Eagle Sports Broadcasting Camp.

“Don Bosco was an opportunity for me to practice the art of just building up a solid rapport with athletes. It was great for my development as a writer. Jared Greenberg from TNT was my camp counselor at the Bruce Beck and Ian Eagle Broadcasting Camp. It was a program at the Yogi Berra Museum in Montclair, New Jersey. I did it for two years and a fun experience where you get to rub elbows with people that you know, you learn how to do play-by-play, stand up shots, how to do voiceovers and just the overall process of broadcasting.”

After graduating from Don Bosco Prep, Robinson attended Eastern University in St. Davids, Pennsylvania where he majored in Communications.

There, Robinson was the public address announcer and in-game DJ at men’s and women’s basketball games, in addition to soccer, lacrosse and volleyball. On top of this, Robinson was the acting sports editor and writer for The Waltonian, Eastern University’s newspaper. As if that weren’t enough, he was a student ambassador, giving tours to prospective students.

While Robinson enjoyed gaining experience with in-game entertainment and found himself working hard to balance each of his responsibilities, a monumental personal loss loomed over him.

“I wasn’t the best student, because I went through a lot of personal issues,” explained Robinson. “My grandma passed away before I started school. I was depressed, and actually had a semester where I failed all my classes. I will never forget my Dad when he saw my report card and asked what I did all semester.”

“It took me a lot to buckle down and get things done. I was taking online classes during winter break and had to dig myself out of a hole with a 1.4 GPA. The vice president of the school took me under his wing, and at night I was taking classes at a community college in Philadelphia to get my grades up.”

Overcoming hurdles, ‘Scoop B’ graduated with a BA and MA

Before he left Eastern University Robinson succeeded in doing independent studies on what it meant to be a Black male coming from so many different backgrounds and the NBA from a cultural studies perspective.

“One of the television shows I always appreciate was The Fresh Prince of Bel Air,” Robinson described. “There were so many dynamics of Black men. It gave me a different perspective because I was able to quantify all the different experiences I had lived and going throughout my life. I analyzed the NBA with the marriage between hip hop and mainstream and basketball. I was really able to look at culture and society.”

After graduating, Robinson wanted to further sharpen his craft and skills by pursuing a master’s degree in journalism at Hofstra University.

“My dissertation when I graduated from Hofstra was discussing the select celebrity of the changing nature into sports journalism,” said Robinson. “I sat down with Sasha Vujevic, because he considered himself a celebrity because he played basketball for the Lakers and won a championship with Kobe Bryant and was dating tennis star Maria Sharapova.”

“Scoop B” presented his findings in a thesis, written articles, podcast, and video component. Some of his work even appeared in SLAM Magazine.

After graduating from Hofstra, Robinson encountered difficult times in finding a steady job and had to freelance for 10+ publications just to make ends meet. “The major companies and networks were not knocking on my door,” Robinson recalled. “I was living with my other grandma in a basement apartment, literally waiting for the check to hit the mailbox and sometimes working for free.”

“I did not have an oven in my basement, cooking on hot plates, crock pots and microwave. The refrigerator, a double door refrigerator freezer where the refrigerator side didn’t work and freezer side worked liked a refrigerator. From 2011 to 2013 I was writing feature stories about Jabrill Peppers who was at Paramus Catholic, built a relationship with Kyrie Irving who was with the Cleveland Cavaliers, writing at Brooklyn Fans, Queens Times Ledger, East Orange Record, West Orange Chronicle, Brooklyn Courier Ebony Magazine, MaxPreps, Complex, VIBE Magazine and Jet Magazine.

Paving the Way and Making a Name

“Don’t take no from somebody who is not qualified to tell you.”

“When you are trying to create something that’s different what’s the norm, your own family may not understand you, sometimes your own friends and nights where a lot of your friends are going out and having fun you are in your home working and it will pay off in the long run but sometimes you have to find the time to balance having fun and working because you think about it.”

Despite these tough times, life for Robinson changed for the better in 2016 with starting his own podcast Scoop B Radio that focused on sports and entertainment. Robinson had other gigs with The Source Magazine, and Arise News. From 2015-2016, Robinson worked for CBS, where he hosted Brown and Scoop, was columnist at CBS Local Sports, and held positions with CBS Sports Radio and CBS This Morning.

In addition to his podcast, Robinson joined Respect Magazine in 2016.

“The Scoop B Radio podcast literally started out of a Timberland box,” Robinson described. “So I got my early start with the Nets at 12 years old, I had old tapes from the show that me and my business partner (DJ Manny El) basically digitized into audio. We had interviews with BJ Armstrong, Scott Burrell, Dikembe Mutombo, and Jason Williams.”

From there, “Scoop B” was able to build his repertoire and book guests such as Shaquille O’Neal, Charles Barkley, Kenny ‘The Jet’ Smith, Tim Thomas, DJ Khaled, and Mark Cuban. He gets sponsors and averages about two to three millions streams per year on his platforms.

While expanding his experience and Robinson was also a managing editor and columnist for Respect Magazine from 2016 to 2018.

“It was during the time of ‘Shut Up and Dribble’ and Donald Trump where the racial divide was a topical issue. I started pinning pieces about what it meant to be in America at this point and something I took great pride in,” said Robinson.

“As much as I love basketball, I am thrust into the juxtaposition of being a Black male in a white dominated field and being able to function in both of those dual roles. That’s what code switching is about, a term I didn’t know until I got to college and took communications across culture class and there was a coined term. So I just kind of put those things to paper.”

During this time, Robinson dealt with a personal matter as well, as he was diagnosed with a serious medical condition called alopecia areata that caused his hair to fall out.

“At the time I was with CBS, I woke up one day and I was having spots in my hair and losing my hair,” recalled Robinson. “I said what the heck is going on and remember going to the doctor and getting shots to my head. I did it one time and said I can’t do this anymore. Over time I have had a beard, the hair came out my eyebrows and you don’t see them anymore and on my arms and legs comes and goes.”

It was then that Robinson had a conversation with Charlie Villanueva.

“I remember having a discussion with Charlie Villanueva and in either 2017 or 2018 and he encouraged me not to hide my story. You never know who you are inspiring and paying attention and may have a similar condition.”

Robinson shared his story, and in 2018, he left his Senior Writer role with Basketball Society to join Heavy.com.

“I have been here at Heavy for two years and it’s been cool. It’s been a successful digital show but the writing stuff has been pretty cool in the past couple of years with the news that I have been able to break especially with the Lakers.”

2020 has been a very difficult year especially with the COVID-19 pandemic, but it started off on the worst note with the tragic death of Kobe Bryant. Robinson shared his thoughts on how Bryant’s death affected the Los Angeles Lakers and the state of sports journalism.

“You think about it, it’s surreal. LeBron breaks his record and he [Kobe] dies the next day. I’m doing TV and radio nonstop the next day and tired from the night before and some of the rigors of being in this industry. I’m thankful the Lakers were able to win a championship this season.”

“I was in the locker room with the Lakers and Kentavious Caldwell-Pope’s locker is right next to LeBron’s. In January I had just gotten back from a trip to Mexico where I learned a lot about Scotland’s skull and crossbones and what the significance of it was,” Robinson began. “Growing up in a Christian household, the skulls and crossbones symbol is considered demonic.”

“But I learned when you have those skulls and crossbones it’s a tribute to somebody. The shirt that Kentavious wore to that game was hanging up and when he put his clothes back on he had a Kobe Bryant wearing a jersey but it wasn’t Kobe’s face, it was skull and crossbones. We talked about death and irony of what happened the next day.”

In term’s of what’s next for “Scoop B,” he’s ramping up the podcast. He also does correspondent work on MSNBC, Fox, MSG Networks, Al Jazeera, CNN and Revolt.

Most important to Robinson in his life and journey in sports media has been family and mentors. “I think it took a village, I call it “Scoop’s Village” to get me in that position,” Robinson described. “Whether it’s my church family, friends and multiple mentors. Chris Broussard, Justice Hill who worked at MLB.com and professor at Ohio University, Kareem White was a producer of ESPN, Ian Eagle and when I was in school at Eastern University Dr. Leonard Jamison.”