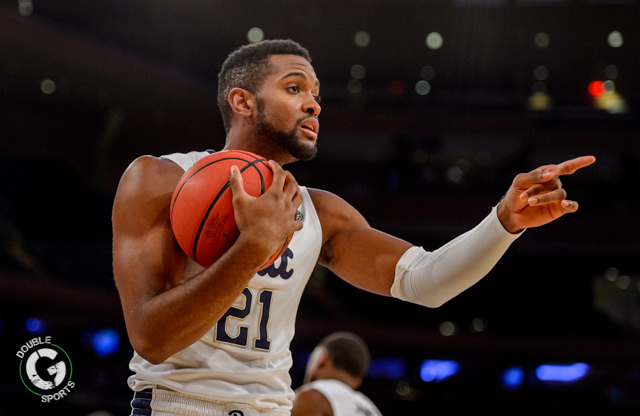 BROOKLYN, NY — In the nightcap of Day one at the ACC Tournament, the Pitt Panthers held off the Georgia Tech Yellow Jackets and won by the score of 61-59. After a first-half full of missed jump shots missed free throws, and dunk attempts being denied by the rim, the game finally got competitive and went down the wire, as Pitt prevented Georgia Tech from getting a potential game-winning shot off at the buzzer to cap off an exciting second half.

In addition to the thrilling finish, a group of young, enthusiastic, and passionate Pitt fans helped cultivate an atmosphere that perfectly culminated an end to what was a great evening of basketball at the Barclay’s Center.

Throughout the entire game, the Long Beach CYO (Catholic Youth Organization) basketball team from Long Beach, New York, relentlessly screamed out from behind the courtside media seats in full support of the Pitt basketball team. What were they screaming out to the players? Anything and everything.

“My goal was to lose my voice,” said 10-year-old Joe Cash. After a full game of yelling out at the Georgia Tech team and fans, Joe gave me some insight on his favorite chant of the game.

After asking the boys why they were cheering so passionately for Pitt, 10-year-old Tommy Cieleski provided me with a sufficient answer.

“My dad is from Pennsylvania and everybody loves Pitt in my family,” said Tommy. “I was excited when I found out the tournament was in Brooklyn because I knew I could come see them play.”

Tommy was one of the many boys who screamed throughout the entire game. Notable screams included “you stink,” “in your big fat face,” and even “meet me outside in the parking lot, bro,” after a Georgia Tech player argued a call with an official. With all these chants and screams to chose from, Tommy knew exactly which one was his favorite.

“Ayyyyyyyyy! Pitt is scoring all day!” screamed Tommy. Sure enough, Pitt outscored their opponents Tuesday night, securing them a matchup with Virginia on Wednesday.

In light of all of the enthusiasm, media personnel, including myself, were stunned at the constant cheering that these kids were doing. Sometimes, to many people’s dismay, the cheering got a little out of hand.

Throughout the game, screams of “throw a beer at him,” “shove it up your butt,” and “punch him in the face” echoed over the media seats and onto the court. In addition to the aggressive chants, the kids alluded to President Trump by holding up a sign that said, “Pitt, make b-ball great again!” which drew some flack from other fans and even from security.

“I have been coming to the ACC Tournament since 1975, but this is the first time I have heard the banshee roar of twenty 11-year-olds behind me,” said John Prouty, a longtime reporter, and statistician for the ACC.

Regardless of how people viewed them, the joy and happiness of the boys were present all over their faces. Along with that, the boys expressed to me that wherever the go, they are united as a team.

“We are the best team in the league! All day! Everyday!” said Joe Cash. On this night, the kids from Long Beach, New York made themselves known at the Barclays Center, as they cheered on their Pitt Panthers to victory.

Welcome to New York, ACC. It is going to be a fun week!