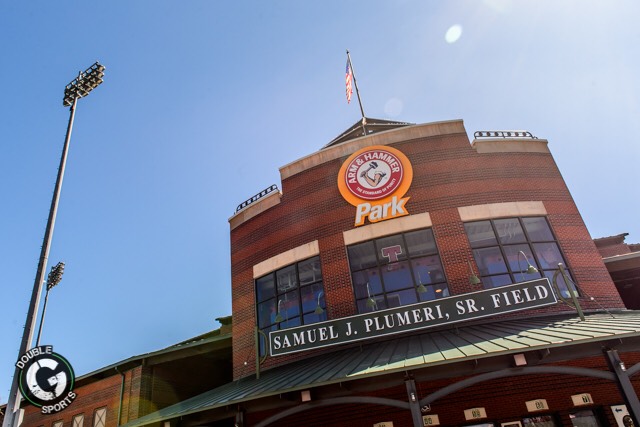 The Trenton Thunder opened their 2018 season with a crisp 5-2 win over the visiting Richmond Flying Squirrels.

The crowd of 6,441 at Arm & Hammer Park witnessed a tight game that was 2-2 after six innings.  Entering the bottom of the sixth, during a critical part of the game, reliever Erik Swanson, stymied the Flying Squirrels when he struck out two, leaving Richmond runners on first and third.  Swanson’s 3.2 innings of scoreless relief, helped him earn the Thunder’s first win of the season.

The Thunder roared in the seventh, when third baseman Billy Fleming took Richmond starter, Ryan Halstead deep to left for a two-run homer.  The Thunder added another run moving their lead to 5-2, which is how the game would end.

Sheffield, from Tullahoma, Tennessee, will take the mound Friday at 7pm as the Thunder play game two of their match-up with the Flying Squirrels (what nut thought of this nickname).  The first 2,025 attendees (ages 6 and over) will receive a 2018 Thunder Magnetic Schedule.

The Thunder are coming off a very success 2017 campaign, which ended after they fell to the Altoona Curve in the Eastern League Championship Series.  The 2017 Thunder pitching staff led the league in E.R.A. (2.83) and strikeouts (1,160) while dishing out an eye opening 20 shutouts.