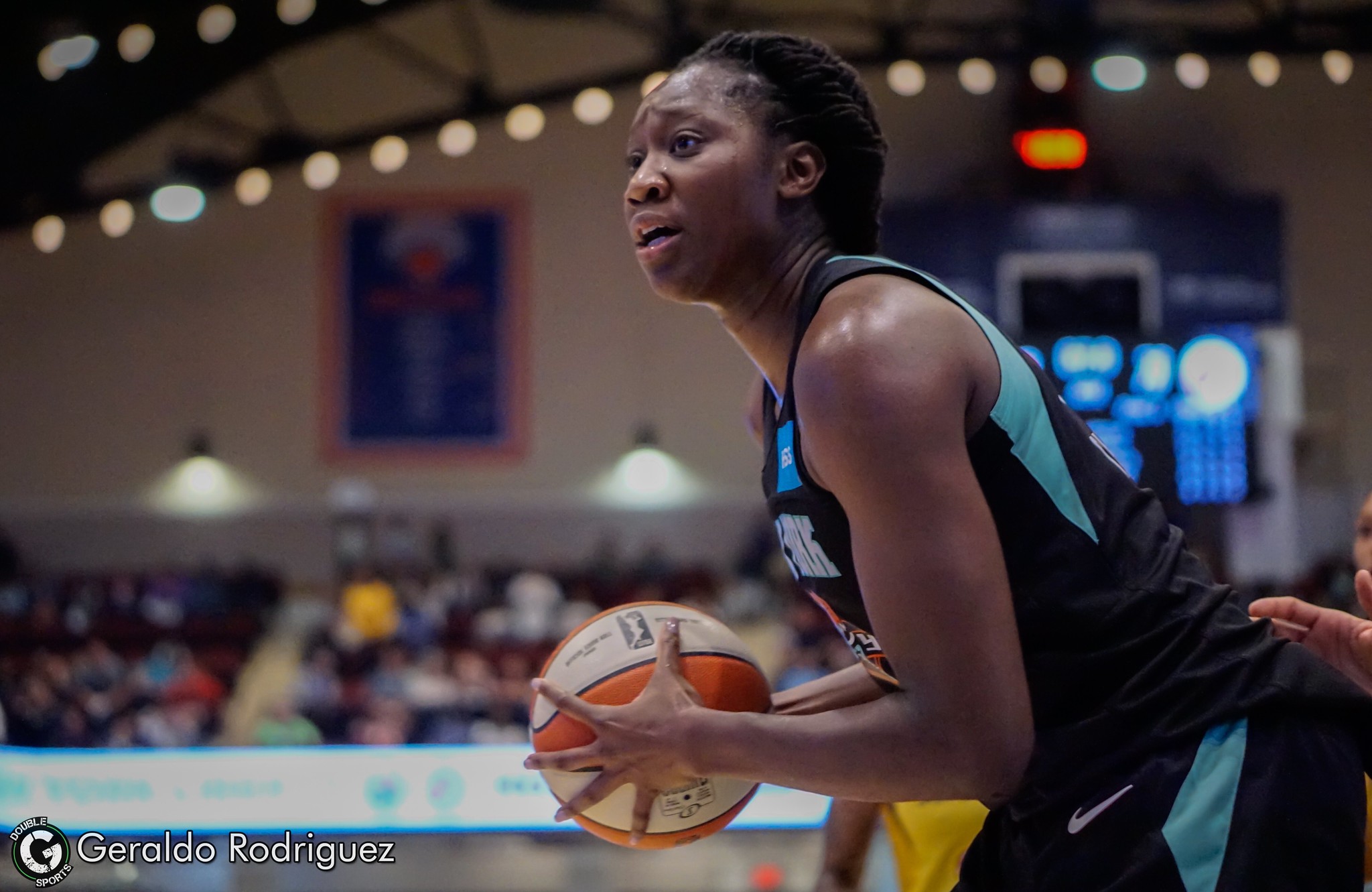 The New York Liberty had a much needed successful road trip. The Liberty had swept a three-game road trip in Atlanta, Seattle and Phoenix after beating Dallas at home to start off the winning streak.  A trip that finally got them back at 500. Unfortunately, all good things come to an end.

Liz Cambage led the way with a double-double, combining with Kayla McBride‘s 24 points to give the Las Vegas Aces a 90-58 win on Sunday afternoon at Westchester County Center. Las Vegas thus takes the three-game season series with two wins by a combined 67-point margin.

Not sure if it was fatigue or lack of  intensity, but the Liberty where blitzed straight out the gate and never had a chance to recover.

“Tough one. We got our butts beat,” head coach Katie Smith admitted in her post game statements. “We didn’t handle (Las Vegas pressure). We can find things, dictate, but they made us turn it over. I don’t think we were strong with the basketball.”

Las Vegas (9-5) rolled to a 44-32 halftime lead and piled on the Liberty (7-8) in the second half, stifling their post players and guards with timely, synchronized defensive rotations. The Aces’ interior defense held New York leading scorer Tina Charles to 5-of-16 shooting, and second-leading scorer Kia Nurse to 1-of-13 shooting.

The Aces scored 24 points on turnovers, six of which came off Brittany Boyd, who is usually responsible for enforcing opponent TOs. Boyd’s role in setting the tone early has been integral and her three early first-quarter turnovers surrendered the tempo to the Aces. New York succeeds when Boyd is able to move the ball up the court in transition.

“The last two games, they bullied us.” said Smith. “We didn’t handle it. We can handle that pressure. We can find things we can dictate, but they made us turn it over, they made us cough it up, and we weren’t strong enough with the basketball.”

After such a successful road trip, that nobody saw coming, the Liberty might have to just let this one go and adjust for the home streak of the season. The way the season started, for them to be at 7-8 right now, would be consider a huge success.

Help Is On The Way

The New York Liberty announced that Bria Hartley, Marine Johannès and Amanda Zahui B., have returned to the team after competing in FIBA Eurobasket. As a result, center Avery Warley-Talbert’s contract has been terminated.

Warley-Talbert signed with the Liberty on June 29 after the team was granted an emergency hardship salary cap exception. In her five games with New York, she saw action in three and scored three points and seven rebounds. Warley-Talbert was also a member of the Liberty training camp roster and played in each of the team’s four preseason games.

New York is back in action on Friday, July 12 against the Chicago Sky at Wintrust Arena at 8pm.