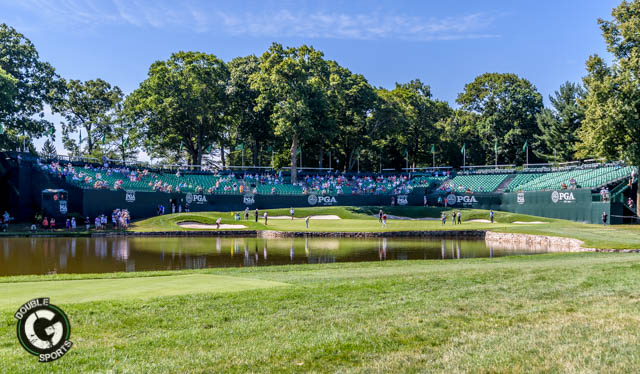 It was a dynamite first round for Texas native Jimmy Walker.

Walker recaptured some of the magic that brought him five PGA Tour victories between 2014 and 2015, firing a 5-under 65 to put him atop the first round leaderboard at the 98th PGA Championship at Baltusrol Golf Course in Springfield, New Jersey.

“To start off playing just solid, lots of fairways, lots of greens, got some putts to go in, hit some quality second shots into greens. Last weekend and today, I felt like I was gaining some momentum and starting to see some go in,” said Walker, who has missed the cut in three of his last five PGA Championships. “So it was nice to keep that rolling today. It felt good.”

Walker’s 65 matched his low round in 15 career PGA Championship rounds (also final round of 2014 Championship at Valhalla). Walker last posted a top-10 finish at the World Golf Championship-Cadillac in March.

A trio of global golfers are one shot back after posting scores of 4-under 66: Argentina’s Emiliano Grillo, England’s Ross Fisher, and Germany’s Martin Kaymer.

Four golfers are two shots back at 3-under 67, highlighted by newly-crown Open Champion Henrik Stenson. Others include Americans Harris English and James Hahn, England’s Andrew Sullivan, and Australia’s James Senden.

Friday’s second round tee times are again at 7 a.m. Eastern as cut day begins with Michael Block, John Senden (currently in the mix at 2-under), and Harold Varner III teeing off at the first and Colt Knost, Joe Summerhays, and Japan’s Yuta Ikeda teeing off at the 10th.