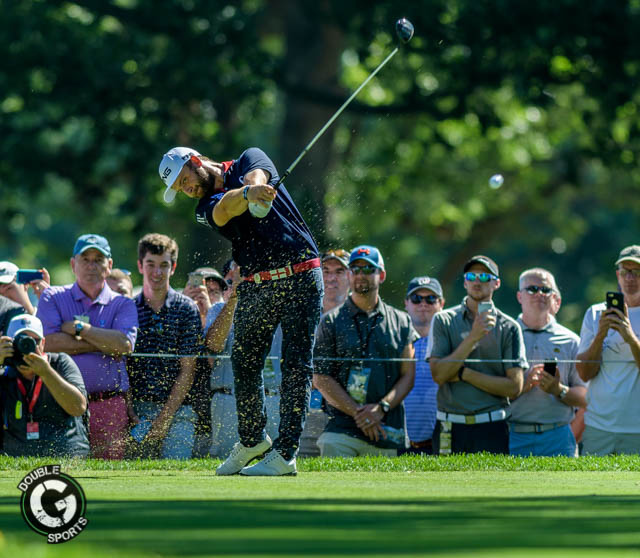 Good Afternoon! The first round of the 98th PGA Championship is in full swing and we already have scores in the clubhouse at famed Baltusrol Golf Course in my hometown of Springfield, New Jersey.

Jimmy’s back: Texas native Jimmy Walker recaptured some of the magic that brought him five PGA Tour victories between 2014 and 2015, firing a 5-under 65 to put him on atop the first round leaderboard. Playing in his sixth PGA Championship, Walker (starting on the 10th) shot a 4-under 32 on his front nine with birdies on 13, 15, 16, 17 and played a steady back nine with just one bogey on the par-4, 489-yard sixth hole.

“To start off playing just solid, lots of fairways, lots of greens, got some putts to go in, hit some quality second shots into greens. Last weekend and today, I felt like I was gaining some momentum and starting to see some go in,” said Walker, who has missed the cut in three of his last five PGA Championships. “So it was nice to to keep that rolling today. It felt good.”

Walker’s 65 matched his low round in 15 career PGA Championship rounds (also final round of 2014 Championship at Valhalla). Walker last posted a top-10 finish at the World Golf Championship-Cadillac in March.

Baltusrol Birdies: Argentina’s Emiliano Grillo, playing in just his second PGA Championship, went out early and grilled the course with a 4-under 66 with birdies on 5, 6, 9, 14, and 15 for his best round ever in golf’s last major. “The greens are absolutely perfect. There’s not a single grass out of place on this golf course, so that helps a lot out there. There was no wind and it’s absolutely perfect conditions for scoring,” said Grillo. England’s Ross Fisher, who is playing in his seventh PGA and trying to snap a two-missed cut streak at golf’s last major, had four birdies over his last 13 holes, highlighted by two straight birdies on the par-5 17th and 18th holes, to post a 4-under 66. “I would like to experience this major for four days which would be nice. So it’s a good start but there’s a long way to go,” said Fisher. … Harris English shot a 3-under 67, capping the day with a birdie on his last hole the par-3, 199-yard ninth hole. “I definitely felt good about the birdie on the last hole,” said English, who is tied for third for the second straight year after the first round of the PGA Championship. “I had a lot of good looks coming in on 6, 7, 8, and 9 and I got one to go. Very happy with my round, had a lot of control over my ball today and played solid.”

Defending champ’s day: After playing the course for the first time on Wednesday and after feeling a bit under-the-weather, defending champion Jason Day showed no signs of fatigue or lack of energy after shooting a two-under 68, ending the day with seven straight pars. “I played good today, drove it nicely and hit a lot of good iron shots. I just didn’t capitalize on the opportunities that I had out there. It’s not disappointing, it is what it is,” said Day, who matched the opening 68 he posted last year en route to his first major championship at Whistling Straits. Day has also posted rounds in the 60s in 10 of his last 13 PGA Championship rounds dating back to 2013.

Philllllllllll: After four bogeys on his first 11 holes, 2005 Baltusrol PGA champion and home-crowd favorite, Phil Mickelson bounced back nicely over his last seven holes with birdies on 3, 6, and 7 to shoot a 1-over 71. “The first 11 holes were really disappointing. I’ve been playing very well at the British and in my preparation, and to come out and hit shots like I hit those first 11 holes was very disappointing. However, I’m proud that I hung in there, fought and got three back coming in,” said Mickelson. “I’ll tell ya what was a big thing for me today was the people out here, the crowd. The people helped really kind of pick me back up.”