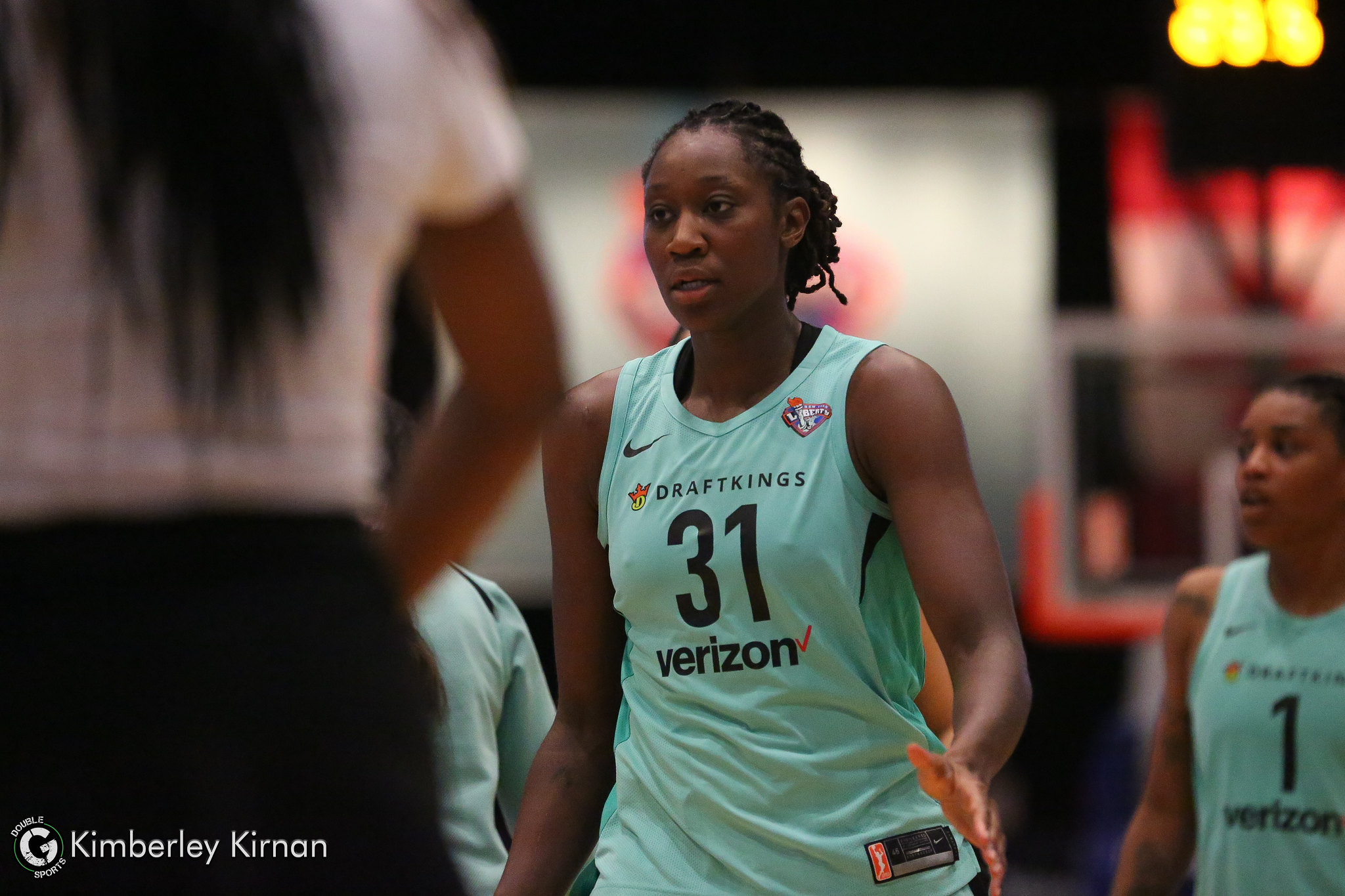 Will Tina Charles play in Brooklyn this season?

Charles is the top remaining free agent in the WNBA. Does she get traded elsewhere and what could the Liberty get in return? What other free agents are available for New York?

The 2020 WNBA free agency period began last Monday. Top free agents have been getting signed or dealt in a flurry that the league has never seen before thanks due to the new CBA agreement.

Phoenix Mercury All-Star DeWanna Bonner was dealt in a sign-and-trade to the Connecticut Sun. Dallas Wings All-Star Skylar Diggins-Smith was dealt to Phoenix for a trio of draft picks. Other big names like Britney Griner of Phoenix, 2019 MVP Elena Delle Donne of the Washington Mystics, 2018 MVP Breanna Stewart of the Seattle Storm and Connecticut’s Jonquel Jones all signed multi-year max deals to remain with their teams.

Charles has been reportedly in trade talks to possibly go to the Phoenix Mercury. Charles was cored at the beginning of free agency, which gives the Liberty exclusive negotiating rights, so if Charles is to go elsewhere, it would have to involve a sign-and-trade. But after the recent trade to acquire Diggins-Smith, Phoenix now has a cap space issue if they still want to bring in Charles. No doubt, a starting line-up of Griner, Charles, Diana Taurasi, Diggins-Smith & Bria Hartley would make them instant title contenders.

The Mercury would need to bundle guard Briann January, currently under contract, as part of a trade with New York to clear out cap space. Bringing January into Brooklyn would create a jam in the guard rotation.

The Liberty are expected to take Oregon’s triple-double standout guard, Sabrina Ionescu, with the No. 1 overall pick in the upcoming WNBA draft. The Liberty also signed unrestricted free agent Layshia Clarendon to a two-year deal, essentially replacing veteran guard Tanisha Wright who retired at the end of the 2019 season. Also under contract with the Liberty is Brittany Boyd.

So a trade sending Briann January to New York just wouldn’t fit, even if Boyd or even sophomore guard Asia Durr are packaged with Charles in a deal.

This also brings up the question of does Charles want out of Brooklyn?

Tina Charles was born and raised in Jamaica, New York and attended Christ the King High School in Queens. The Liberty will be playing their 2020 season at the Barclays Center in Brooklyn after being exiled to Westchester for the previous two seasons. This move to Brooklyn and Barclays is thanks to new ownership from Joseph Tsai, who bought the team from the original owner, James Dolan, in early 2019.

One would think that Charles would be eager to play in her hometown and immediately re-sign with the team. But the Liberty are under new leadership heading into 2020. Along with new owner Joseph Tsai, the Liberty have a new GM in Jonathan Kolb and a new head coach in Walt Hopkins calling the shots.

Outside of Charles, the entire Liberty roster is under 30. They’ll bring in Ionescu as the main building block and the new face of the Liberty. Pairing Ionescu up with Durr and 2019 All-Star Kia Nurse in the backcourt will solidify them for many years. Kolb and Co. could sign Charles to a one-year deal, but under the new CBA, Charles can’t be cored in 2021 and would be free to sign anywhere she’d like next season. So this new group is trying to get something in return for Charles, just a matter of getting something respectable.

If Phoenix is out of the picture, one other team that’s been very quiet this offseason could make a deal for Charles. The Minnesota Lynx have yet to make any moves this offseason. They’ll be without Maya Moore another year as she has opted to sit out again. Long-time veteran Rebekkah Brunson has retired and moved to the coaching bench with the Lynx. And All-Star guard Odyssey Sims will miss the majority of the 2020 season due to pregnancy.

Minnesota has the cap space and potentially the necessary pieces to go after Charles. Minnesota also has a need at PG, and pairing up Charles with Boyd in a deal could make things worth it for the Lynx.

The Liberty would look to grab the Lynx’s No. 6 overall pick in the draft plus one of their young post players in either Damiris Dantas or Jessica Shepard. Adding in a third piece could seal a deal (2021 draft pick?).

As free agents continue to get snatched-up at a rapid pace, the Liberty need to act quickly if they want to deal Charles before seeing her walk away in 2021.

As week two of the free agency period starts, there are few remaining players left for the Liberty to pick-up. Most notable would be SF Essence Carson, who left the Liberty in 2016 after eight years with the team. Carson played for the Los Angeles Sparks (2016-2018) and Phoenix last year.

There’s nothing much left in terms of post players, but the Liberty could go after former center Carolyn Swords (2015-2016) to add a veteran post back on their team if Charles is dealt somewhere.

In terms of their current roster, the Liberty have the following under contract: Clarendon, Durr, Nurse, Boyd, Rebecca Allen, Amanda Zahui B., Kiah Stokes & Han Xu. Players Marine Johannes, Reshanda Gray and Nayo Raincock-Ekunwe have also been designated as “reserved players” and the Liberty have exclusive rights to them.