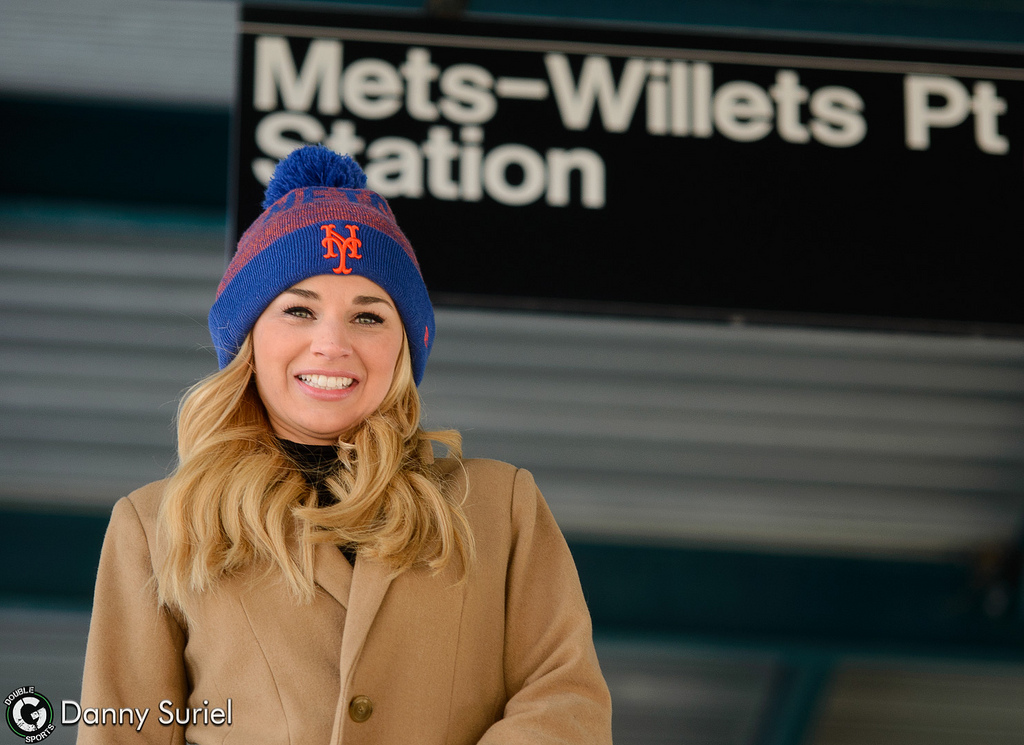 There are many talented women with experience in various fields within the sports media industry, and while most of them have exclusively covered sports in their careers, there are some who have a diverse reporting background, reporting on sports, as well as news. One of those individuals is Emily Reppert, who I spoke with as a part of the Double G Sports Women in Sports series.

Emily currently works as the in-stadium host for the New York Mets, where you can see her on the video scoreboard between innings. She has previously worked as a reporter for Channel One News, Fox Sports Southwest, as well as KSAX, an ABC affiliate in Alexandria, Minnesota. 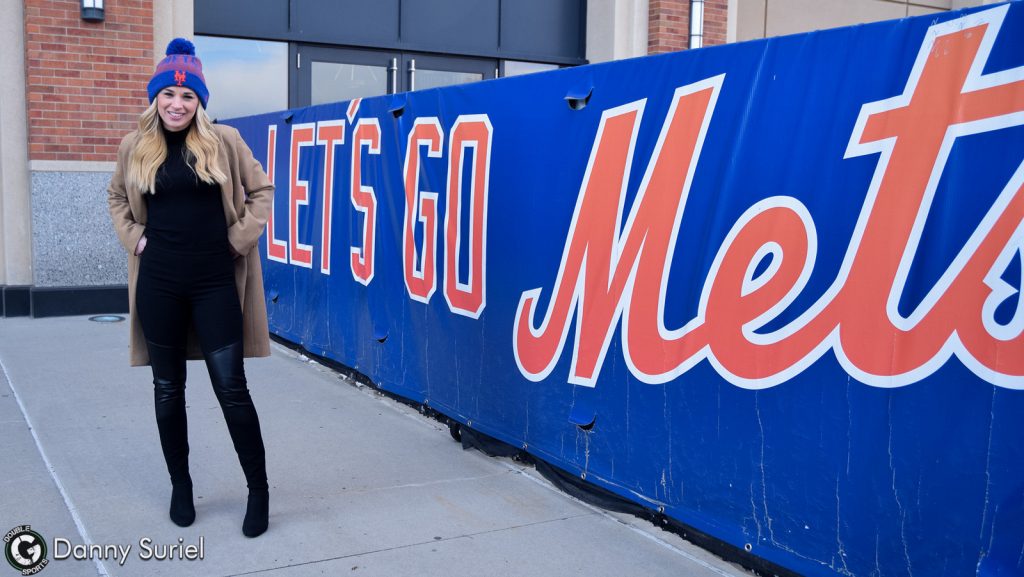 DoubleGSports (DGS): Tell me about how you grew up. Did you grow up in a sports environment? Did you have family and friends that were into sports?

ER: It’s funny, I didn’t grow up in a sports environment at all. If anything, it was the complete opposite. My parents were into the arts and music, and that type of stuff, so really growing up, I never was into sports…so it’s actually kind of funny how I got into it.

My first job was in news, out of college. I went to Minnesota and did a small one-man-band reporter thing and randomly got a phone call one day from a couple guys at Fox Sports Southwest, in Dallas, and they were breaking away from the network to do their own show. They wanted to put on a kids sports show and they had randomly seen my reel on YouTube, and were like ‘Are you interested in a sports show?’…So that’s kind of how it all started for me…I started later in life but I fell into sports that way and I’ve been working in it one way or another since then.

DGS: What was the name of the station you started at?

ER: I started in Alexandria, Minnesota, which is a town of 10,000 people, north of St. Cloud, small, small, northern town. The station was called KSAX-TV. It was an ABC affiliate.

DGS: What was it like going from a smaller market in Minnesota, to a larger market, such as Dallas? Did it help you?

ER: It definitely helped. When I went to Dallas, my role was at a weekly magazine show. I produced it, I hosted it, I was out on the field reporting, but I was 24-25 at that time, and had a little bit of experience, but had I not been in Minnesota, and I always preach small market, get in there, learn how to shoot, learn how to edit on a deadline, learn how to turn a daily package, and even though I didn’t have to do that as much as my next job, having all of that experience, I don’t think I would have been able to do it. I knew it helped me a lot.

There’s just so many little skills that you learn and getting to do it and figuring it all out in a small market, I think is just so good for anyone really, no matter what direction you want to take, even if you want to be a host or go to a sports network, doing that type of work is vital.

DGS: When you joined Channel One, was your goal to stay doing sports, or did you want to do news?

ER: I was in Dallas for about five years and I did the kids’ sports show for three seasons, and it’s a hard industry with ups and downs where sometimes things just don’t always work out so after three seasons that show was done, so I felt like I kind of hit a wall and then I started trying to work my way into Fox Sports (Southwest)… so I just started editing for pre and post game shows, doing whatever I could, then eventually for the Mavericks magazine show or Stars magazine show and started turning packages and putting myself in the package and eventually reporting for them.

But I felt after five years of that in Dallas I felt like I hit a wall…I always love reporting no matter what it is if it’s news or sports and Channel One, I just thought was an interesting opportunity because I grew up watching Channel One in school. It’s a national level, instead of a regional sports network, it reaches a broad range and you’re reaching kids, that’s our future, so that made sense. Channel One was unique that they gave me the opportunity to cover whatever I wanted. Even though I covered news, I got to do a lot of cool human interest sports stories, which is what I love, talking to kids. I did a story on sports specialization, I talked to a kid who had Tommy John surgery, I did a story about a Muslim boxer who wasn’t able to compete because she wore a hijab, so those are the stories that I love doing and Channel One allowed me the opportunity to do it in New York City. I get to New York and see what happens. I just thought it was a good networking and next step to help me. And then I started working for the Mets, so it was good exposure that gave me the creativity and freedom to tell the stories that I like.

DGS: Have you received any recognition in the media or with Mets fans that regularly go to games?

ER: Yeah and I would say Mets probably because Channel One, even though it probably reached a broader audience it’s kids and it’s not just New York based, they’re all over the country. It’s actually funny a couple times at Mets games I did have teachers come up to me and they’re like you’re the girl from Channel One!” but I also get the Mets thing too. I think here in New York, locally, I get more Mets, but I’ve gotten a little bit of all of it. 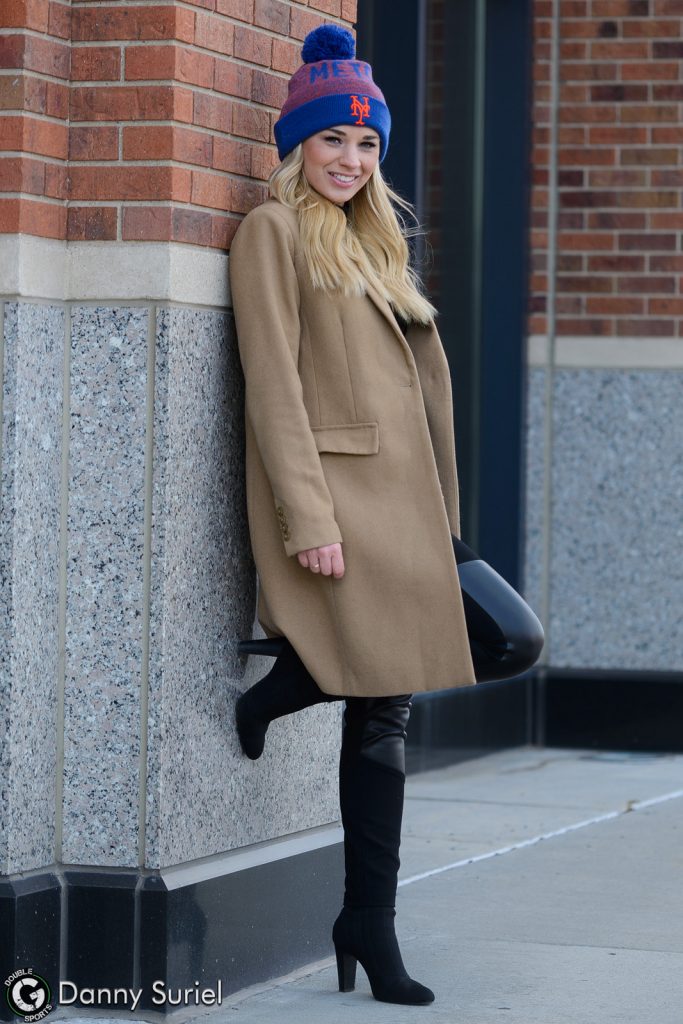 DGS: Alexa Datt was also a former Mets in-stadium host, and she has worked on SNY and MLB and NHL Network. Do you hope to take your career on a similar path to hers? If not, what is the next step that you hope to take as a sports reporter?

ER: Absolutely. My role as in-game host, I think a lot of these roles are changing and I hope maybe in the future, everything’s going to digital and everything’s kind of merging that maybe there’ll be more opportunities within the Mets from what I do now and I hope that we’ll see where it takes me but that’s my main job right now that I’m focusing on. I want to explore as much as I can and do as much as I can and see where it goes. (Alexa’s) doing awesome, so it’s definitely someone to look up to and seeing where she went from there keeps you going.

DGS: Besides Alexa, are there any other people that you see in their careers and want to emulate that?

ER: I feel like I have always kind of not fit in a box, because I have the sports background, I’ve done regular hosting stuff, I’ve done hard news, I’m kind of all over the place and I think my strongest quality is just being as genuine as I can. I feel like I’m just very much real and that’s what I do no matter what I do. I look at people like Katie Nolan, not necessarily your typical sports reporter, she keeps it real and I like more of the sports culture.

When I was in Dallas, I did reporting for the Mavericks for their magazine show and a lot of that was fun reporting, like going through the guys’ lockers and asking, ‘What’s in your lockers?’ Fun stuff like that. I love exposing athletes that way and I think that’s what people want to see. They want to humanize people and I enjoy doing that because I think I keep it real, so seeing her do stuff like that, that’s someone I want to emulate for sure.

DGS: I have always noticed that 10-15 years ago, you would never see anything like that go on (in media).

ER: Exactly and now it’s kicking off…I think that’s what people crave now and that’s what I enjoy doing the most so I’m more of like let’s create something instead of trying to fit into a box.

DGS: I think people appreciate that because not only would you not have seen this in the past, but I think people are loving it because you see players on Twitter and Instagram and you feel like you could connect with them

ER: Exactly. And it’s so much easier now to really connect and interact and you see guys writing back. Now, information is at your fingertips so just reporting the scores, those days are kind of gone, because you can look on your phone and find it, so what else is there?

DGS: Not only can you follow players, you can follow reporters and they’ll give you a behind the scenes, and you would never even think about doing that stuff before!

ER: That goes back to it too if you can follow someone on social media, and that’s the real them, that should be the same person you’re seeing on-air. I think people can relate and connect to that too.

DGS: Since you’ve worked at all these places, from what I understand from your answers, you want to take what you’ve done with your background and make it your own.

ER: Yes, I want to make it my own thing. People always say, ‘Are you sports? Are you news?’ I’m a little bit of everything and I know that sometimes you should have one focus but I don’t think that’s always the answer and I can pull from a lot of different experiences. I have experience sideline reporting or hosting, there’s so many different skill sets that I’ve picked up and I think they can be meshed all together.

DGS: Reporters from ESPN, for example, usually have a background of only reporting on sports and I think your multi-faceted background stands out from other reporters.

ER: I think, for other people too, always just keeping your options and your mind open to things. Looking back I would have never thought I’d work in the sports industry. I think it’s good to have goals, but I also think that keeping an open mind is really important in this industry because the industry’s changing so rapidly, and also you never really know until you try, so I’ve always maintained that throughout everything.

(Click here for more of our 2019 Women in Sports Interviews)