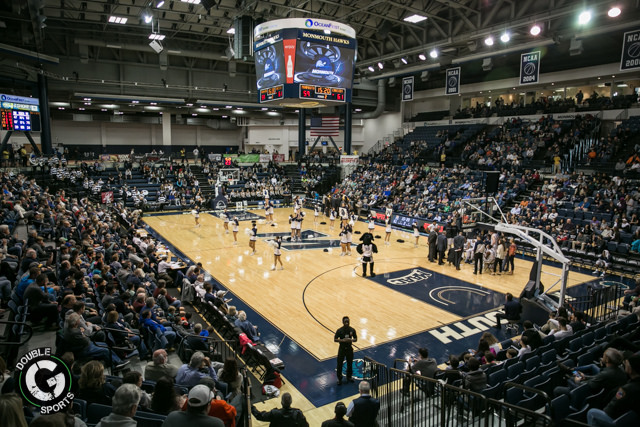 For the past two seasons in the MAAC conference, a small school from the Jersey shore has run the show. The Monmouth Hawks have won their conference handedly and, even with falling short in the conference tournament, the below are three reasons why they are becoming a nationally recognized, mid-major program.

Is it coincidence M.U. decided to build a brand new arena just as their men’s basketball team started winning games? Of course not! Just don’t mention it under Title IX. Because how convenient is it to land a state of the art athletic facility just as the Hawks acquired multiple ESPN games and the NIT tournament bid? Convenient indeed.

You ever wonder why Florida Gulf Coast became dominant overnight? Of course it has to be the recruiting, right? Or maybe it has something to do with going to school in a humid, majestic, bikini filled paradise. There really cant be any bad days on Florida Gulf Coast, but don’t sleep on the small beach towns of Monmouth County, NJ. Sure there may be more tanning beds than palm trees, but a beach is a beach, and having the ability to get a little sand and sun after spring mid-terms is never a bad thing.

#1. You got Kentucky on the Schedule

The most direct result of winning games. If you want to consistently play the best, you need to be the best, respectively. Monmouth’s ability to run through their MAAC regular season schedule the last two years has resulted in a two-year deal with the holy grail of college basketball. The Hawks will get to play the Kentucky Wildcats at MSG for the upcoming 2017 season, and then again at Rupp Arena in 2018. This speaks volumes as to where Monmouth basketball is heading, and creates a whole new headline for any major recruit who needs a good reason to stay close to home.

Look for the Hawks to have a positive showing against Kentucky, as well as another successful conference run. If those two things come to fruition, I think we have a strong case to put Monmouth in the same breath as Mid-Major powers Florida Gulf Coast, Middle Tenn State, and South Dakota State alike.

The point is: Be excited for Monmouth! I certainly am, not only as a fellow New Jerseyan/washed up player reminiscing of AAU games in their old gym, but also as a college basketball fan!