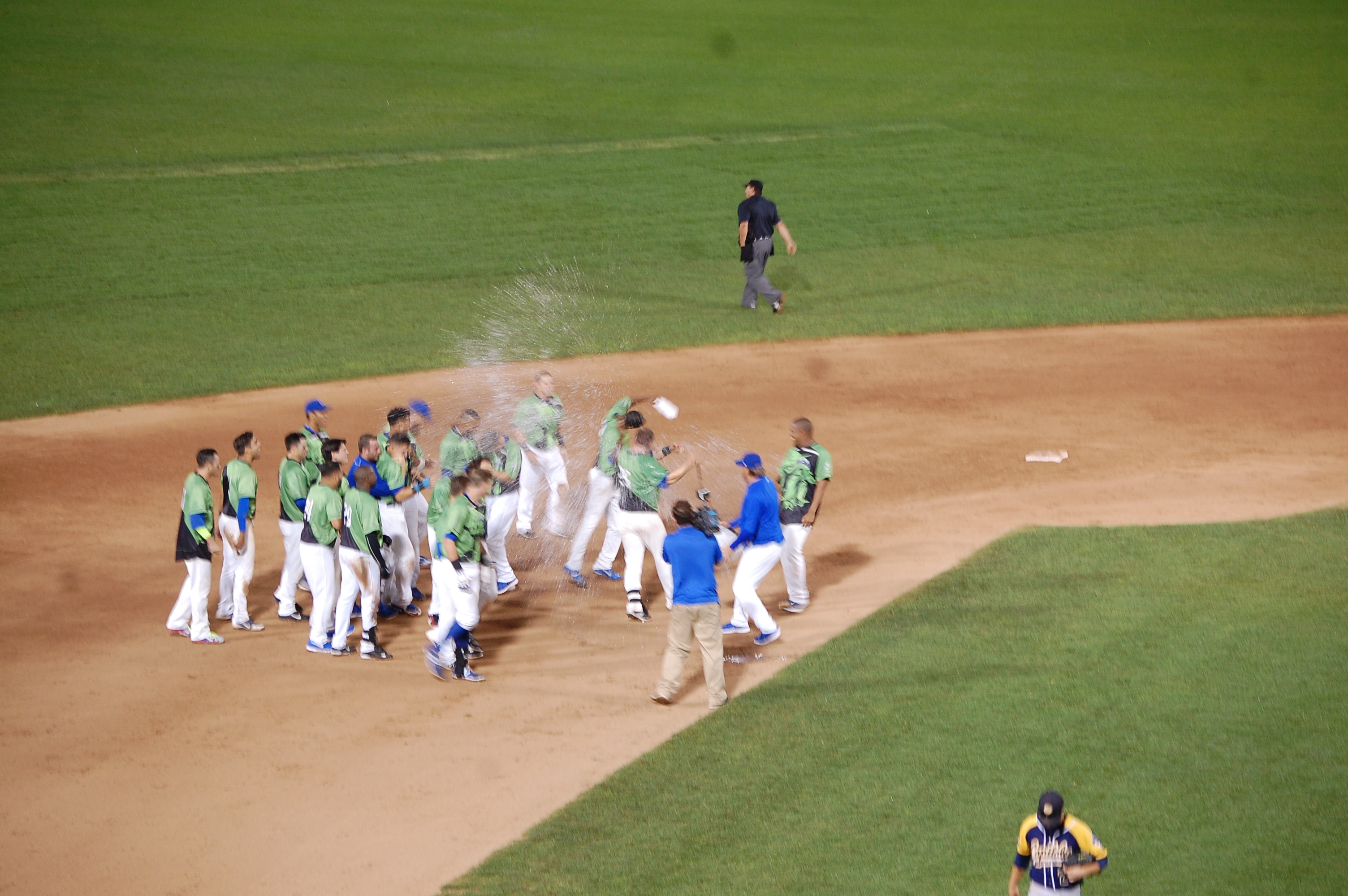 Boulders rally to win 2 of 3 against Quebec, Hang on to First Place in Can-Am League

With the Can-Am League race tightening up, the Rockland Boulders managed to hold on to their first place lead by taking two of three games against the Quebec Capitales at Provident Bank Park.

Rockland quickly responded in the bottom half of the frame.  Jared McDonald led off with a triple down the right field line. Quebec starting pitcher McKenzie Acker plunked Junior Arrojo. Stephen Cardullo grounded into a 6-4-3 double play bringing in McDonald increasing the lead to 4-1.

“Salazar was in control the whole game and shut the door when they had a couple of chances” said Manager Jamie Keefe. “We were able to limit the big innings and add a late run which was key” added Keefe.

Quebec answered back in the top 5th scoring twice reducing the margin down to 4-3. Gurriel belted a line into the left center gap that Stephen Henderson fielded and faked the throw to third but ending up spiking the ball allowing Tyler Young to score all the way from first base. Gurriel advanced to second on the throw home. Jonathan Malo reached on an infield single. With runners on the corner, Kalian Sams bounced a high chopper to Junior Arrojo who tossed over to Steve Nyisztor at second to turn the double play but Malo broke it up with a hard slide allowing Gurriel to score.

The Boulders tacked on a key insurance run in the 6th. Joe Maloney led off with a double and Charlie Law smacked a hot shot ground ball off the base of the pitcher’s mound into center field scoring Maloney. Quebec threatened in the 7th with runners on the corner with 2 outs but Daniel Carela got Alexei Bell to fly out to right field ending the inning.

Rockland’s bullpen held the lead as Chad Robinson struck out two of three in the eighth followed by Luis Sanz working a scoreless ninth to record his 10th save of the season. Richard Salazar earned his Can-Am League leading 9th win of the season hurling 6 2/3 innings allowing three runs on eight hits while striking out five and walking two.

“Getting the 9th victory is real good as I am trying to repeat what I did last year which is get the 10th victory or more” said Richard Salazar. “The team has supported me with great defense and offense” added Salazar. “I’m just trying to go out there every fifth day and give the team a chance to win”

Rockland jumped to early 3-0 advantage in game 2 of the series riding the hot bat of Alex DeBellis who got things started in the 2nd inning knocking a bases-loaded two run single. With runners on the corner in the 4th, DeBellis grounded into a 6-4-3 double play that allowed Charlie Law to cross home plate.

The Capitales got on the scoreboard in the 6th as Kalian Sams swatted a 2-run homer into the Short Porch area in right field making it 3-2. With two outs in the 8th, Quebec caught some lucky bounces as Gurriel smashed a ground ball that kicked up off Junior Arrojo into center field. Jonathan Malo followed ripping a grounder back up the middle that Arrojo stopped but Malo reached safely at first base. After Malo swiped second putting runners at 2nd and 3rd, Sam smoked a 3-run missile off Chad Robinson into the left field bleachers giving Quebec its first lead of the game at 5-3.

Quebec put the game out of reach in the 9th, scoring 3 times off Boulders’ pitcher Marcus Jensen. Josue Peley doubled over the head of DeBellis in the right field bringing in two runs followed by a sacrifice fly from Yordan Manduley plating Peley.

“Harrold threw the ball as well as we could have asked him to and made one mistake,” said Manager Jamie Keefe. “Chad comes in and gives up two infield hits and then the big hit to Sams” added Keefe. “We had our chances early but their starter kept them in it”

In game 2, the Boulders were down 8-5 entering the 9th inning, but they mounted a furious rally. They strung three consecutive singles from Jared McDonald, Junior Arrojo and Stephen Cardullo. Then, Joe Maloney stepped up and hammered a bases-clearing drive off the base of the left field wall tying the game up at 8-8. On the throw to home plate from Yuniesky Gurriel that ended up at the backstop allowing Maloney to advance to 3rd. Marcus Nidiffer capped the comeback with a walk-off sac fly to right field bringing in Maloney for the game-winning run.

“A huge win that gives us momentum going into the series with New Jersey” said Joe Maloney. “We were trailing all game long which was tough but our bullpen kept us in the game” added Maloney. “Our lineup one through nine finding  away to get huge hits and on base” “ I had confidence coming in and just a put a good swing on the ball”

The Capitales quickly raced out to 4-0 lead through the first two innings in the rubber match of the series. An RBI fielder’s choice by Steve Nyisztor in the 2nd trimmed the lead to 4-1. Quebec responded in a flash as Kalian Sams walloped two-out solo shot into left field bleachers.

Rockland cut Quebec’s lead to 5-3 with 2 runs in the 3rd. Nidiffer fisted a bases loaded single into center and Junior Arrojo scored on a wild pitch uncorked by Capitales starting pitcher Mark Hardy on ball four to Charlie Law.

“We needed a heartbreaker win because we had not had any comebacks in awhile” said Marcus Nidiffer. “I came into a great situation but all the credit goes to Joe who had a great at bat clearing the bases,” added Nidiffer. “It gives confidence to the players if you’re a couple of runs down, keep playing because you have a chance” “It was a good win in front of the home fans which have been great”

Quebec second baseman Tyler Young RBI single in the 4th increased the lead to 6-3. The Boulders answered back in the bottom half of the inning as Jared McDonald drove in his 46th run of the season. In the 6th inning, Young laced a RBI triple off Marcus Jensen down the right field line pushing the lead back to 7-4.

Steve Nyisztor cranked his first home run of the season in the bottom half of the frame making it 7-5. The Capitales added to their lead in the 7th on a bloop RBI single to center from pinch hitter Tim Smith. Shawn Gilblair managed to limit the damage getting Peley to line out to Giuseppe Papaccio who skied high into the air and Manduley to ground into a force out ending the Top 7th. Daniel Carela(3-0) who worked a perfect eighth inning earned the win in relief.

“That is why you play 27 outs especially when it’s the rubber match of a series which is crucial and huge” said Manager Jamie Keefe. “It’s all about the 22 guys on the roster and bringing it as every guy down that lineup had something to do with this victory” added Keefe. “We kept hanging around and I said to guys in the clubhouse give yourselves a chance to bring that tying run to the plate whether its no outs or 1 out”