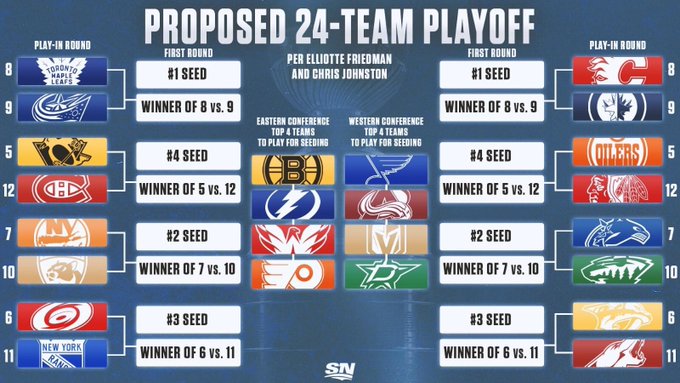 The first domino has officially fallen within the four major sports.  The National Hockey League (NHL) took the first step towards resuming their season on Tuesday, laying out a plan in tandem with their Resume To Play committee that includes scrapping the rest of the regular season and moving to a 24 team playoff format.  Each step of Tuesday’s conference call with Commissioner Gary Bettman will be laid out below as part of the Resume To Play action plan.

The second is that not only are the seven teams that are currently outside the playoff bracket done for the year, but they await a complex, layered lottery system to determine the number one pick in this year’s draft.  The draft process is not a finished product yet but it will include multiple rounds of lottery picking both before the play-in games and after.

It’s too complex to try and explain before it’s been officially determined, but it will be layered so that the worst teams have the best chances of receiving the number one pick and once the play-in round is finished, those eight losing teams will be throw into the mix as well.

The hotly contested format mentioned before will now officially come to fruition.  As Bettman stated in his call, the top four seeds from each conference will play a round-robin tournament to determine who is the top seed after the play-in round.

The remaining eight teams in each conference will face off against each other in a best of five “play-in” series.  For example, the fifth seed in the Eastern Conference, Pittsburgh, will play the 12th seed in the conference, Montreal, to determine who moves on to the next round.

The one caveat that has yet to be determined is whether or not there will be re-seeding after each round or if it will strictly be a bracket, similar to the NCAA Basketball Tournament.  The full bracket is the featured image on this article.

How did Bettman and Co. come up with the 24 team format?  It’s all based on points percentage, as each team didn’t finish the regular season with the same amount of games played.  This format benefits fringe teams like Montreal and Chicago that didn’t have much of a change to make the playoffs before.  However, something as complex as this will never be perfect for each fanbase.

The play-in round will be a best of five, but it hasn’t been determined whether the first and second round will be five or seven games.  Both the conference final and Stanley Cup Final will be best of seven.

Where will this be played?

Bettman stated that the NHL and NHLPA are looking at ten potential hub cities to play in.  These cities will house the players and all team staff, have ample practice facilities available and ample testing facilities available.  Bettman also said that there will be a maximum of 50 personnel from each team that will be in the hub city.

When will the NHL return?

The question of all questions is when is hockey going to return?  Unfortunately, right now it’s a bit of a loaded question.  Due to the unknown future circumstances regarding COVID-19, there hasn’t been a set date placed for the season resuming.

What has been determined is a four phase program to get the NHL back to playing.  The four phases are as follows;

Phase One is the phase we are currently in.  All players have returned home or stayed quarantined and cannot use any facilities or skate with any players.

The NHL announced on Monday that they will officially look to launch Phase Two in the first week of June.  Phase Two consists of players and personnel, in groups no larger than six, returning to the ice to practice in voluntary workouts and self quarantine in the city where they play.

Phase Three is a mandatory mini-camp, essentially a training camp for all players.  It will run as a normal camp with the added necessities to keep players safe/constantly tested.  An important factor to remember here is that Commissioner Bettman stated that Phase Three will not happen until AT LEAST July 1st.

Phase Four is the resuming of playoff games, whether it be the round-robin tournament or the play-in games.  Phase Four can only begin once each team has had a proper training camp.

It’s a bit confusing but if you take the time to go through each point step by step, it all makes sense.  COVID-19 and the pandemic are very sensitive things to try to work around.  The NHL and NHLPA want to make sure that the Stanley Cup Playoffs begin in a way that is both beneficial to the fans and players and safe for all involved.

It’s certainly not a foolproof plan but the National Hockey League took a big step forward by having a set plan in place for July.  More than likely the games will begin in mid-July and the Stanley Cup Playoffs will go on until early September.

The NHL putting this plan out at once was important for two reasons;  One it gives fans hope that the season will return in a short period of time, and two it cements the NHL as the very first league to have a plan of this magnitude.  If the NHL is going to grow, being the first league to take on all this madness will certainly help.

However, as always the most important thing is the safety of the players, coaches, staff and their families.  If the NHL isn’t thorough enough with their plans/testing this could all come crumbling down.  Regardless, it’s a start.