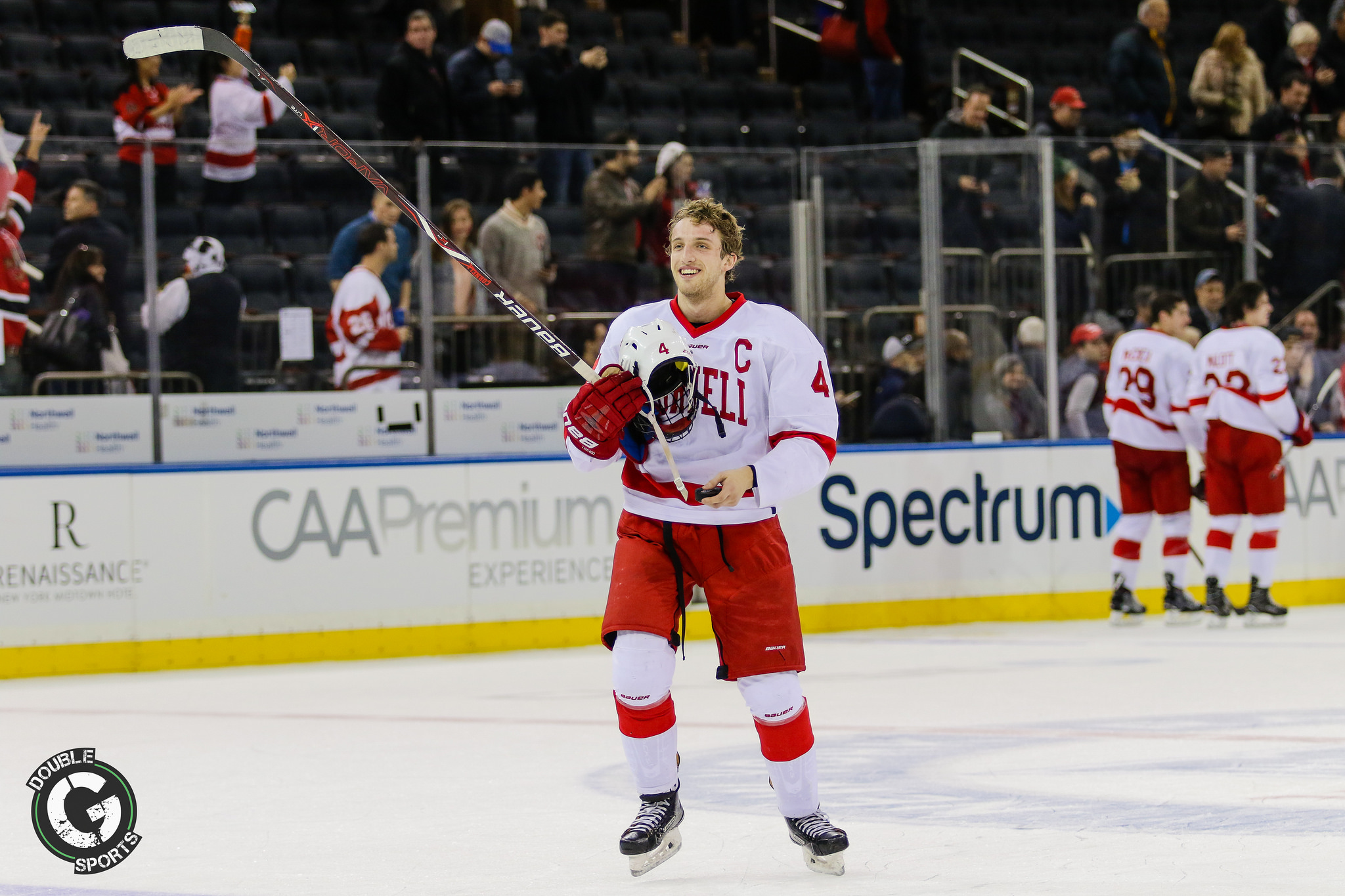 After Losing the First Five Red Hot Hockey Games, Cornell Gets on the Board This Series with a 4-3 Victory Over Boston University

The first period was a relatively close one between both the Terriers and Big Red. At the seven-minute mark into the first period, Cornell found themselves on the powerplay, thanks to a roughing penalty on forward Drew Melanson. On that opportunity, defenseman Morgan Barron had a beauty of a shot on the Terriers goaltender Jake Oettinger’s glove side, but was denied.

Cornell would strike first 15:18 into the period, thanks to a goal from center Beau Starrett, after passes in front from center Trevor Yates and defenseman Alex Green, leading past Oettinger.

Noah Bauld had a breakaway chance five minutes into the period, but was denied by Oettinger. Cornell would then extend their lead to two goals, thanks to a backhanded goal from Yates 6:37 into the second. The Big Red would go on a power play and looked to have a 3-0 lead. However, winger Anthony Angello’s shot deflected off the inside of the right post.

Moments later, defenseman Alec McCrea would make the 3-0 lead official thanks to a shot from the left circle on the power play, 9:06 into the period.

Goaltender Matthew Galajda would escape an onslaught of shots from forwards Shane Bowers and Brady Tkachuk. Galajda would then make a miraculous, split legged save on Terriers forward Hank Crone while on the penalty kill. It would not end after the penalty kill, as Galajda prevented an attack from Tkachuk, Crone, and forward Jordan Greenway. That attack saw a wide open net, with the puck careening just wide of the line.

Boston would get their first crack at getting back in the game, thanks to a high-sticking penalty by Starrett. The Terriers would do just, that , as defenseman Dante Fabbro would unleash a slap shot, power play goal past Galajda’s glove side.

However, Cornell would put an end to any comeback thoughts, thanks to a goal from winger Tristan Mullin which elevated above Oettinger’s blocker, with eight minutes remaining in regulation.

Boston would not go quietly into that good night, thanks to a slap shot goal from defenseman Chad Krys with six minutes remaining in regulation, cutting Cornell’s lead to 4-2. With less than five minutes remaining, forward Patrick Harper would cut the lead to 4-3, as he snuck the puck past Galajda.

The Terriers would pull Oettinger with two minutes remaining  for the extra-man advantage. With multiple scoring chances for Boston, Cornell would hold down the fort, and win their first ever victory in the Red Hot Hockey.

“We came back, made it 4-3, and found a way to win,” said Cornell head coach Mike Schafer. “We give all of our leadership credit and all of our freshmen credit.”

The main key to Cornell’s success in this game was the play of the freshman. Mullin would score his first goal of the season, and Barron factored into two Big Red goals.

It wasn’t just the scoring, but it was the goaltending as well. Galajda made 35 saves on 38 shots on goal, and kept Cornell in the game. The saves he made were crucial, as the score could have been drastically different from the 4-3 final.

The freshmen shined on the big stage known as the Garden, and were major contributors in Cornell’s first Red Hot Hockey victory.

“It started here with ten freshmen,” said Schafer. “If you told me we’d be 9-1, I would have signed up for that faster than the New York Lotto…I give our leadership a lot of credit, and I give these [freshmen] a lot of credit for adjusting to college hockey.”

“Coach had us prepare for this [game] like any other game,” said Mullin. “Try not to make a big deal about it, but that’s tough with the bright lights and the big crowd. Just play it like any other game and focus on what we do well and we did that.”

In the first two periods, it was all Cornell. Once the third period started, however, Boston stepped up their game big time.

By the end of the second period, the Terriers began to shoot at will against the Big Red. In the third alone, Boston lead in shots on goal 16-9, and they lead to points, but were missing the crucial tying point.

“I guess it’s easy to play when you’re down 3-0, but it’s also not easy to play in the same breath,” said Boston head coach David Quinn. “I give the guys a lot of credit. I thought we showed a lot of resolve, a lot of mental toughness…you saw what we were capable of doing.”

Defenseman Dante Fabbro stood out in particular, as he played a factor in all three of Boston’s goals. Scoring their first goal in the second, and scoring secondary assists on the following two goals.

“…I had three points, but I was also out there on all four goals against,” said Fabbro. “That’s definitely something I take pride in…It’s just one of those things that I look pretty hard on and I think it’s pretty unacceptable on my portion.”

The New York Rangers drafted Morgan Barron in the sixth round of this year’s NHL Draft just days after he was announced as a member of Cornell’s Class of 2021. On Saturday night, Rangers fans in attendance (including New York defenseman Kevin Shattenkirk) got a sneak peak of the prospect.

In his game against Boston, Barron notched two primary assists on Cornell’s second and third goals. With his debut in the World’s Most Famous Arena, the young defenseman shined bright in front of the New York faithful.

“Playing at Madison Square Garden, I think it’s a pretty special experience for anyone,” said Barron. “It definitely lived up to the hype. I don’t think I really took it in until the second or third period…It’s the World’s Most Famous Arena for a reason and it’s awesome to play there, for sure.”

With Cornell now on the board in this series, we will have to wait until 2019 to see if they can make it two wins out of seven. However, this game on Saturday showed that Boston University will not go down without a fight.