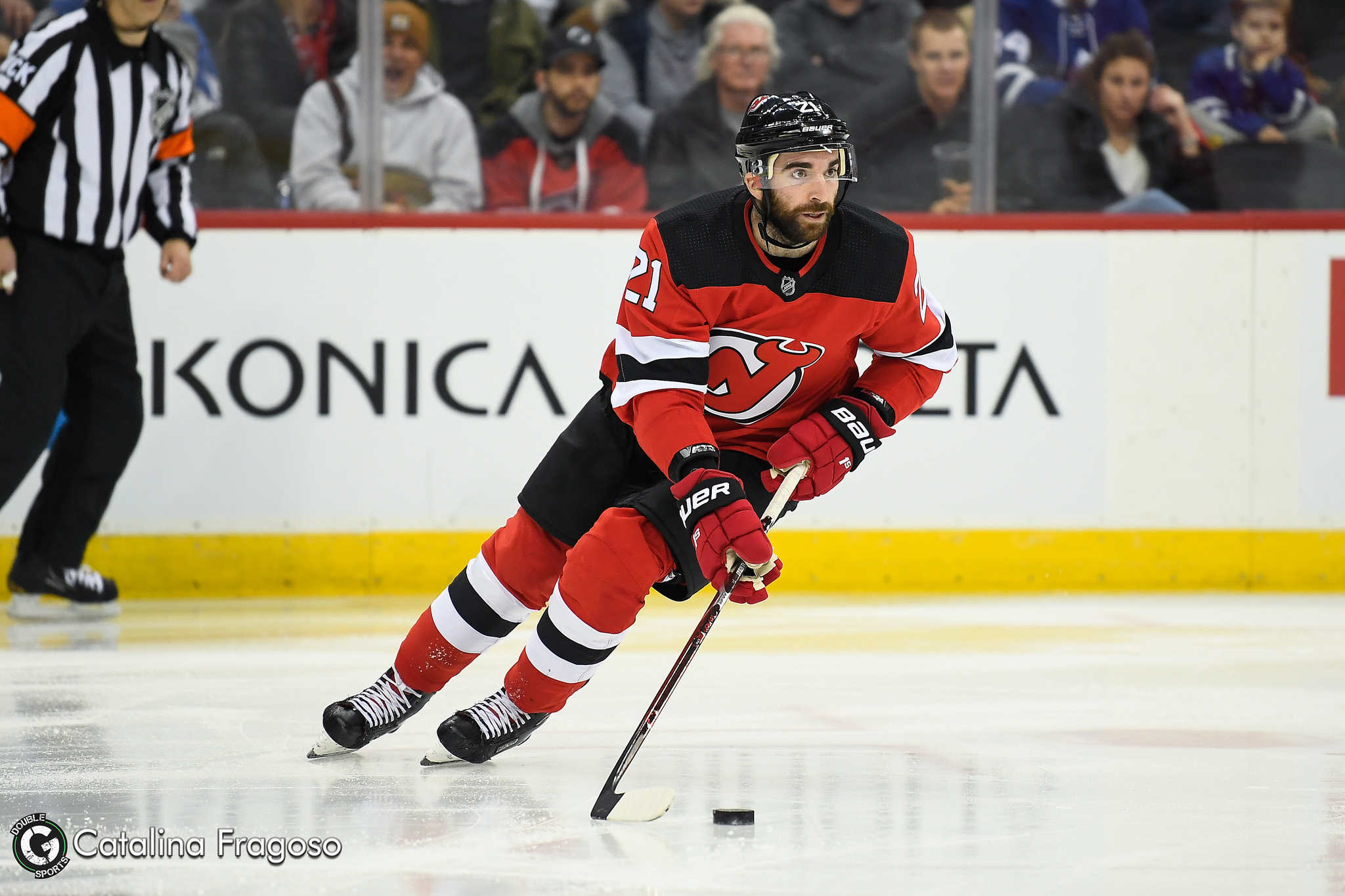 If you are a fan of offense and goal scoring, you were in for a treat on Monday night between the New Jersey Devils and Chicago Blackhawks at Prudential Center.

With an announced crowd of 15,204, the Devils jumped out to a 1-0 advantage with less than seven minutes left in the first. Blake Coleman timed it out perfectly as the team killed off a power play exiting the penalty box and picking up a loose puck for the breakaway and deking out Chicago goalie Cam Ward before lifting the puck into the net.

Entering the contest, Blackhawks leading goal scorer and points leader Patrick Kane was on a five game point streak, Kane extended that streak evening the contest up with his 26th of the season three minutes into the second period. However, New Jersey responded quickly two minutes later as Kyle Palmieri netted his 21st of the year. With the Devils on the power play, it just took 20 seconds into the extra man advantage for Palmieri to score his team leading 22nd goal.

“Guys did a great job around the net and second opportunities there,” said Palmieri. “Pucks have found their way into the back of the net for me, keep going with that and trying to stay healthy.”

New Jersey was not finished lighting up the goal lamp in the period tallying three more goals, highlighted by Kevin Rooney’s first career NHL goal with two minutes remaining. Just when it seemed the Devils would take a comfortable lead into the locker room, Chicago stormed back late scoring two goals in the span of 42 seconds including Kane notching his second of the night.

Head Coach John Hynes on the team’s performance, “Offensively we did a lot of good things and capitalized on certain situations. Good to see the power play going score a couple of goals and penalty kill was good again. We played an immature game at times, got up 6-1 and went to sleep.”

Palmieri on the second period, “We played great for 13 or 14 minutes but kind of let our foot off the gas. We saw the type of team they are capable of and going in the high-powered offense they did. First half of the game we did a good job playing down in their end but made some mistakes and little loose defensively.”

In the third period, Brett Seney provided some cushion bagging his fourth goal of the season with less than 12 minutes left on the clock. The back and forth action continued 38 seconds later as Dominik Kahun wristed a shot past Mackenzie Blackwood. Chicago refused to throw in the white towel as Brandon Saad roofed the puck top shelf past Blackwood with 1:32 to go with Kane securing his second assist and fourth point of the game. Coleman made sure that would be, as close the Blackhawks would get scoring his 16th goal of the season on an empty-netter with 34 seconds. Blackwood made 27 saves, won his second game since returning from an injury and sixth overall.

“Playing 82 games and best league in the world it’s tough to win, have to find different ways to win and found a way tonight,” Hynes said. “Excellent we won the game but lots of lessons to learn from in maturity and understanding game situation and every team is good. We got causal at times and paid for it.”

Hynes on the play of Blake Coleman, “He has really grown in his consistency and identity. A great example for a lot of young kids out there, our team and organization. He spent time in the American Hockey League and understands his role. He has some goal on breakaways, established himself as an excellent penalty killer and put himself to play other teams’ five on five and top lines. He lives the right way, great physical fitness, very coachable and willing to buy and accept the role and got NHL talent. Difference in guys that fit it and make it to the NHL and other guys that don’t and perfect example of that.”

Palmieri on the win, “It’s still good to come out on top. Really not our style of play, guys over in that locker room have proven they can out up seven, eight or nine goals consistently and something we looked to be a part of our game plan but a win is a win. It’s two points and we need every point we can get.”

“We’re going to have to string together some wins to get back into the playoff picture,” said Palmieri. “Coming out of the Christmas break, you have a couple of games heading into the All-Star break and we need to finish on a strong note. Focusing on Columbus and rest of the week.”