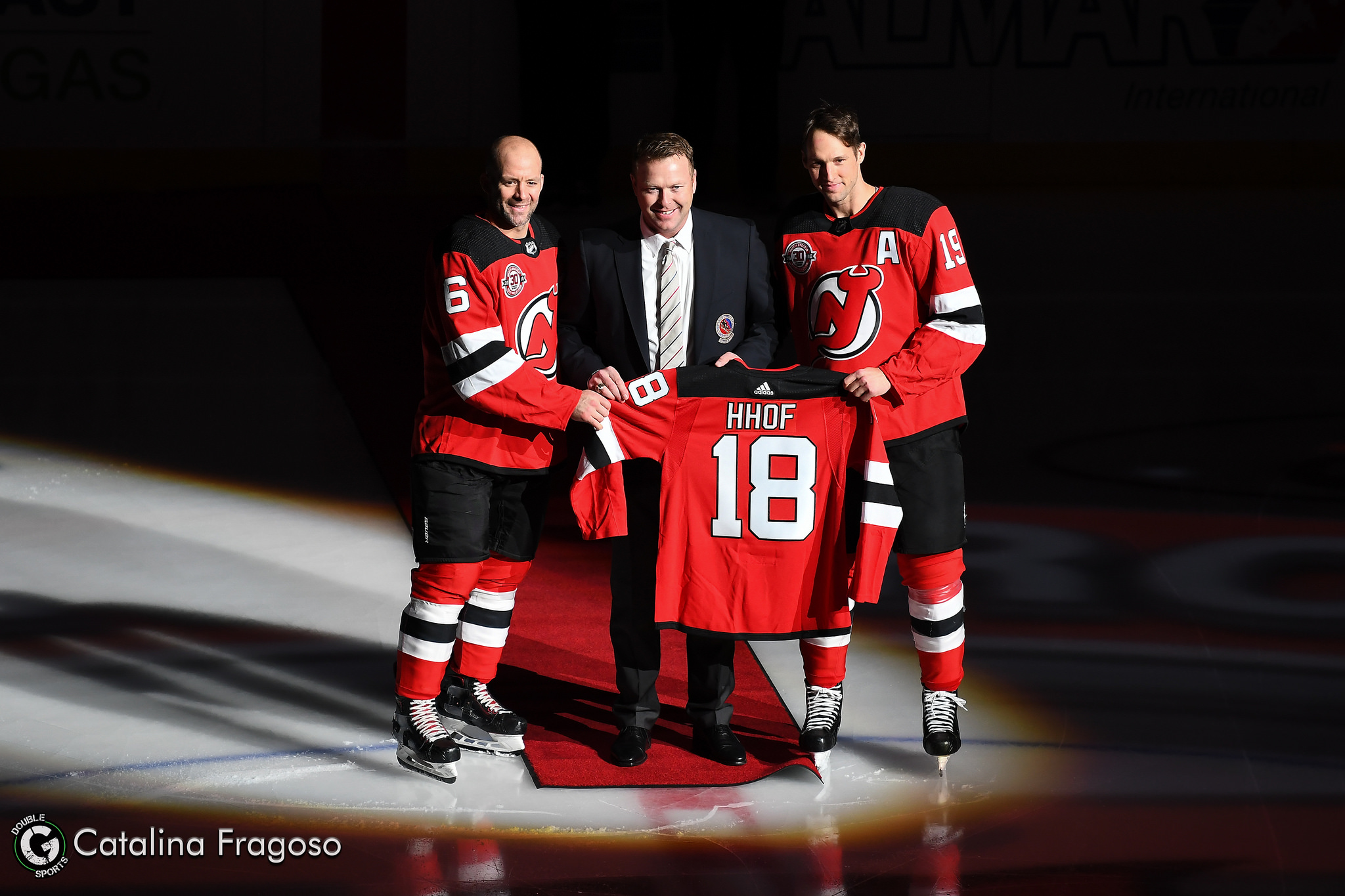 On a night dedicated to Martin Brodeur’s induction into the Hockey Hall of Fame this past weekend, the Devils took on the Pittsburgh Penguins after beating them 5-1 earlier in the month.  The pregame was filled with all things Brodeur. A video montage of Brodeur played on the big screen showcasing some big moments in Devils history. A tunnel of #30 jerseys high-fived the newest HOF inductee down the red carpet.  A clearly emotional Marty dropped the puck between two of his former teammates Andy Greene (Devils) and Sidney Crosby (Team Canada).

Before the start of the game, a quote from Taylor Hall appeared on the Jumbotron, “We have to dig in and battle for the guy next to you.”

The Devils came into Tuesday’s game looking to find a spark.  With little offensive production and a defense that seems to be going through the motions, it has fans questioning where the team will end up in April.  They looked to the home ice to turn their losing streak around.

Absent from the line-up was Brian Boyle. The center was the difference maker in their first meeting of the season with Pens.  In that game, he scored his first career hat trick and overall played at a very high level. He was placed on the IR on Tuesday with an upper-body injury.  He joins Steven Santini who as also put on the IR late last month with a broken jaw. Nico Hischier missed his first NHL game as he is day-to-day with an upper-body injury.  Travis Zajac, Ben Lovejoy, Jesper Bratt, and Stefan Noesen were all in the line-up as they are all day-to-day with their respective injuries.

Whether it was the Brodeur magic in the air or the intense desire to get a W, there was energy in the air at the Rock.  28 seconds into the first period, as Pens goalie Casey DeSmith tries to cover a puck in front of the goal, magic strikes.  Zajac was able to steal the puck from the DeSmith and put it past him to put the Devils up 1-0. Hall and Damon Severson pick up the assist and set the tone for this game.

For most of the first, it was a lot of back and forth with some hard hits, one even seemed to shake the tough Miles Wood.  at 6:04 the Pens massive center, Evgeni Malkin was called for a hook. However, Pittsburgh had a solid penalty kill against the Devils.

Keith Kinkaid was a solid wall when Matt Cullen tried to shove and push the puck into the side of the net using his stick as a pool cue.  The first period also saw Wood with an NBA looking lateral that corralled a high sailing puck.

Phil Kessel, however, tied the game at 13:57 on a power-play goal after Noesen was called for a high stick on Jake Guentzel.

That was not the last power play of the period for the Pens, Greene was called for tripping at 17:09.  Although they had a few solid looks nothing got passed Kinkaid.

Second Period Gets Chippy on the Ice and in the Crowd

Starting the second period tied, there was fire in everyone’s veins.  The first penalty of the period was given out to Lovejoy. He was called for delay of game at 4:48 for the puck going over the glass.  Devils put out a solid PK and went back to even strength.

Just about eight minutes into the second Severson got it passed a lunging DeSmith to put the Devils up 2-1.  After that things got weird.

Bratt, who was only playing in his third game of the season thought he got his first goal.  Except it was called off on the count of whistle-blowing seconds beforehand. At the other end of the ice Kessel had just been called for roughing (although it looked like he was getting roughed up in this girl’s eyes) on Brett Seney.  While both were sent to the box, Kessel was issued a double minor that was served by Patric Hornqvist.

This event prompted the fans to organize some chants against the black and whites.  The chanting commenced every time the refs blew the whistle (even for calls against the Pens).

Not to be left out of the nudging Carl Hagelin and Brian Dumoulin got a little handsy with a few Devils around the net. 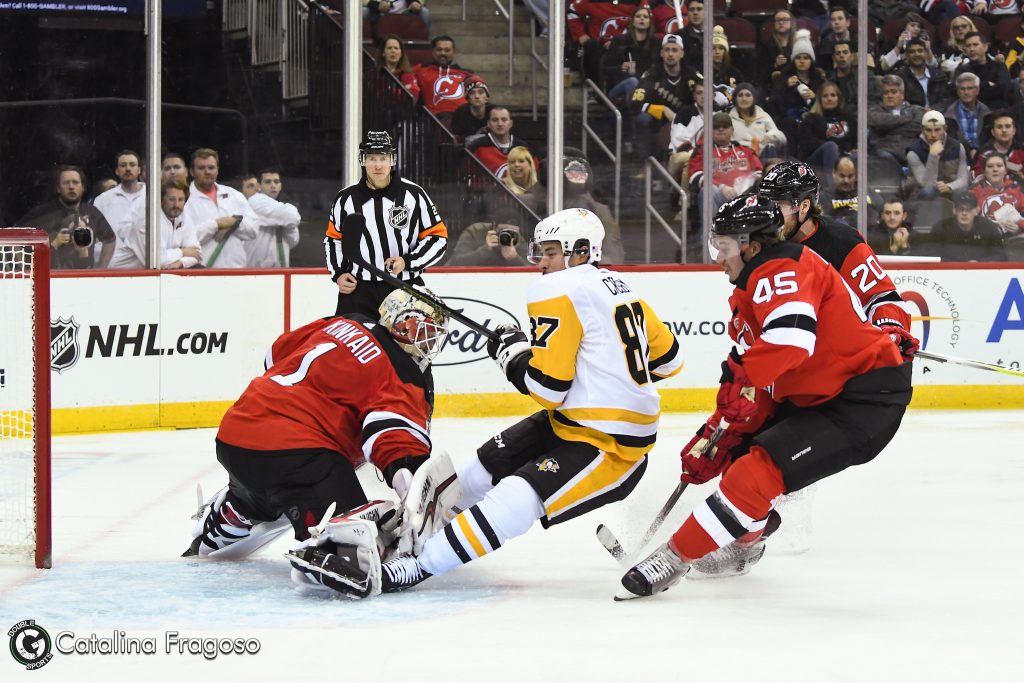 I very rarely deviate from given a fair and balanced take on the game but the Pens second goal of the night has this reporter shocked.  At 4:04 the refs awarded a goal to Guentzel. I use awarded because that was one suspect goal. Crosby started with the puck and tried to get a shot off. Instead took down Kinkaid allowing Guentzel to get the goal.  Coach John Hynes challenged the goal on the account of Crosby’s blatant interference. The refs claimed that Severson actually pushed Crosby into Kinkaid thus calling off interference on Crosby’s part. (Side note, as I wrote that sentence I was rolling my eyes).  Severson, in my opinion, did not have the contact with Crosby to produce that reaction. But, it’s Sidney Crosby sooooooooo.

With the game now tied at 2, this tends to be the time where the Devils break down in the last couple of weeks.  Not this particular Tuesday in front of a crowd of over 15,000 at the Rock. Hall was able to get it passed DeSmith after a great pass from Zajac.  That assist gave Zajac his 300th career one.

With 3:30 left in the game I patiently watched Penguins Coach Mike Sullivan give the nod to DeSmith and pull him off the ice.  Just about a minute later DeSmith was sitting and six Pens circled Kinkaid. However, that did not waiver him. He stayed solid.

Hall got his second of the night with under 30 seconds left in the game.  This secured the Devils second win over the Penguins this season.  The Devils do not see the Pens again until January.

Zajac was a force.  He had the second most minutes on the ice behind Sami Vatanen.  A lot of talk is centered around Zajac and being a certain age. Personally, I believe that Zajac is a leader on the Devils.  He brings experience but he also brings tenacity and wisdom. I asked him after the game how the Devils can take the momentum from Tuesday’s home win to their game against the Flyers in Philadelphia on Thursday.  He said “ We can’t be satisfied we have to continue to try and get better in areas. We are obviously not where we want to be yet. We have to continue to get better and put some work in and focus on our game to be the best as possible.”