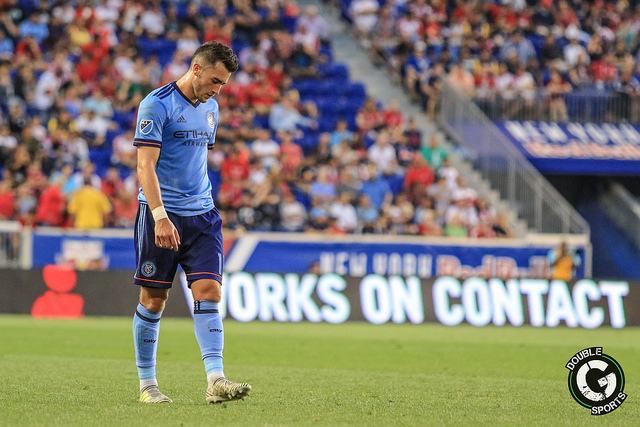 In their two previous matches against Sporting KC, NYCFC’s only goalscorer was Frank Lampard. Tonight, his apprentice, Jack Harrison, added his name to the list of goalscorers.

With the weather formulating into a stereotypical English night, rain and clouds amidst in the sky, the 20-year old forward from Stoke-on-Trent took center stage. After a lackluster 85 minutes of soccer, Harrison rose from the depths of the puddly pitch to be the hero for the Boys in Blue.

Harrison’s superb volley proved to be the only goal of the match, but the youngster’s moment of brilliance doesn’t paint the whole picture of Wednesday night’s game. The win over Sporting KC wasn’t so much about Jack Harrison being Jack Harrison, but more about NYCFC showing that they are a team even without some of their brightest stars on the field.

Entering the match, NYCFC lacked their captain and leading goalscorer, David Villa, along with more than half of their typical Starting XI. Because of the lack of starters, not many people expected NYCFC to earn a point on Wednesday night against arguably the best team from the Western Conference, let alone three points.

In response to their doubters, NYCFC responded to the low expectations with a sense of togetherness and

“The eleven who start just represent the whole,” said head coach Patrick Vieira. “What really made me proud of the win today was the consistency in our performance, no matter who is playing,”

With this win, NYCFC proved two things to their supporters: that they have depth, ironically, and that they are a team not reliant on David Villa.

In past years, if David Villa wasn’t on the field for NYCFC, you could almost automatically chalk a loss in the “L column” for NYCFC. This year, the same narrative is not applicable.

Despite not getting on the score sheet, Ugo Okoli, NYCFC’s backup striker signed this offseason, worked hard during his stint tonight on the field, earning praise from his manager.

“He showed me he’s someone I can count on more for the rest of the season,” said Vieira. “He sacrificed himself for the team.”

Andrea Pirlo, who has primarily been a target of criticism this season, put in one of his better shifts tonight, showing that there is still something left in the tank of the 38-year old Italian.

Both of those players, who haven’t necessarily lived up to expectations this season, proved that they could provide quality minutes for NYCFC.

Despite all of the skeptical analysis on NYCFC’s team at the moment, tonight’s win showed that this is club is a team at heart. When called upon, players are stepping up and putting in quality shifts for Vieira, showing that this team is driven to win week in and week out.

With second place in the Eastern Conference firmly in command right now, NYCFC will look to get healthy before the playoffs come around in a month. But, there is certainly an alleviation of pressure on the team, and fan base, that NYCFC can pull out results even when they have a depleted roster.

A Match Not Fitting for the Atmosphere; Three Takeaways From the USMNT 2-0 Loss to Costa Rica
For Red Bulls, US Open Cup Final is a Chance to Re-Write History
Posting....