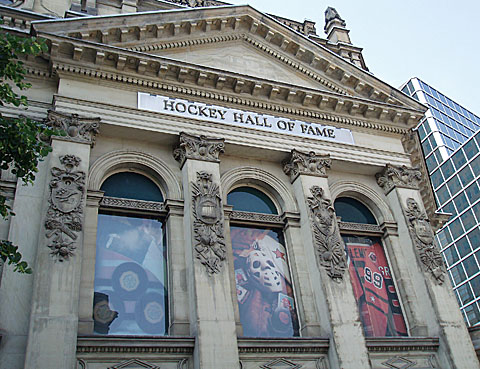 On Wednesday, the Hockey Hall Of Fame announced six new members to its legendary halls.

Players Marian Hossa, Jarome Iginla, Kevin Lowe, Kim St-Pierre and Doug Wilson, and builder Ken Holland make up the latest class to be enshrined in Toronto. From players to executives, each new member has made a huge impact on the game of hockey and they will forever be remembered in the Hockey Hall Of Fame.

Hossa played in over 1,300 NHL games putting up over 1,100 points. The 12th overall pick in 1997 played seven seasons in Ottawa before two-and-a-half in Atlanta with the Thrashers. He was traded to Pittsburgh during the 2007-08 season where he started a run that saw him become the first player in NHL history to make the Stanley Cup Final three seasons in a row with three different teams. After coming out on the wrong side of both Penguins-Red Wings Finals, the third time was the charm as he won his first Stanley Cup with the Chicago Blackhawks in 2010. Hossa would go on to win two more Cups with the Hawks before unofficially retiring in 2018 after missing the 2017-18 season with a skin disorder. This was Hossa’s first year of eligibility.

Iginla was the 11th overall pick by the Dallas Stars in the 1995 NHL draft. He was traded to Calgary before playing a game in the NHL where he became an icon.

“Iggy” played over 1,200 of his 1,554 career games with the Flames and is the franchise leader in goals (525) and points (1,095). After two Richard Trophies, a Lindsey and an Art Ross, among others, the Calgary captain was traded to the Pittsburgh Penguins in 2013.

He bounced around with a few teams but was never able to lift the Cup and retired in 2017 as one of the best to never hoist it. The closest he ever came was Game 7 of the 2oo4 Stanley Cup Finals against the Tampa Bay Lightning. Despite this, Iginla won gold medals at the 2002 and 2010 Olympics with team Canada, putting up eight goals in 13 games during those runs.

One of the best leaders of the 21st century was a first-time candidate.

Lowe was a big piece of the Edmonton Oilers’ Cup-winning teams in the mid-to-late 1980s. He played over 1,000 games in two stints in Edmonton after the Oilers chose him 21st overall in the 1979 draft, winning five Cups. Between those stints, Lowe played four years with the New York Rangers, winning a sixth Cup in 1994. He returned to Edmonton to finish his career in 1996 before ultimately hanging up the skates in 1998.

Lowe finished his career with over 1,200 games played plus 172 playoff games.

Outside of the international spotlight, St-Pierre played in the Canadian Women’s Hockey League where she was named the league’s top goaltender twice and was a first-team All-Star in the 2008-09 season. In 2008, she became the second woman to play with NHL players, suiting up for a Montreal Canadiens practice. St-Pierre retired from international play as one of the most dominant goalies of all time in April of 2013.

Wilson was drafted by the Chicago Blackhawks (then Black Hawks) with the sixth pick in the 1977 amateur draft. He played in 938 games for the franchise, putting up 554 assists and 779 points. The 1982 Norris Trophy winner was a three-time all-star in Chicago and holds franchise records in assists and points by a defenseman.

After 14 seasons, Wilson was traded to the San Jose Sharks where he finished out his last two seasons. In 2003, 10 years after retiring, Wilson was named the Sharks general manager, a title he still holds.

After a short, mostly minor league, playing career, Holland took a role as a scout for the Detroit Red Wings. Twelve years later, and after time as the Director of Amateur Scouting, Holland was promoted to an assistant general manager role. Soon after, he was named their general manager.

His accolades include four Stanley Cups, three as GM, four President’s Trophies and four Western Conference championships. He helped to shape one of the most dominant stretches in NHL history including a 25-year playoff streak.

Holland has since moved on and is in the midst of his first season as the Edmonton Oilers’ general manager.

The Hockey Hall of Fame typically holds its in-person induction ceremony in November, but an announcement has not been made about if the ceremony will still happen due to the coronavirus pandemic.