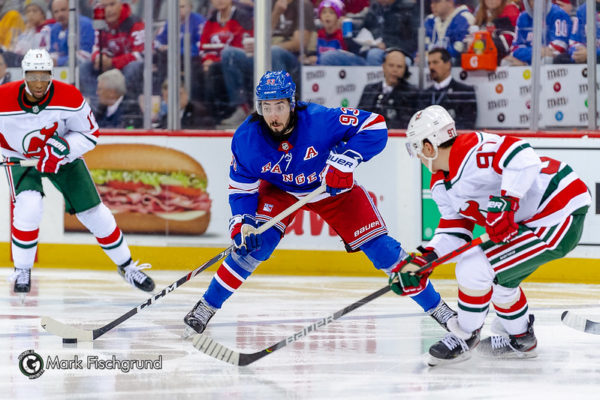 It was a crazy Thanksgiving week in the world of local hockey. The Islanders’ lengthy point streak came to a conclusion, as did their six-week streak of at least one first-place vote, the Flyers and Rangers had busy, but successful weeks as they top the rankings and the Devils are still, consistently, bad. This week, we had four voters including myself.

Carter Hart and Brian Elliot each went 2-0-0 and gave up a combined seven goals in four games this week. It began against Vancouver, where a JT Miller first period goal was Hart’s only blemish while Jakub Voracek and Sean Couturier provided the offense, going for a goal and an assist each in the 2-1 win. On Nov. 27 in Columbus, Elliot was just as good. Nursing a 3-2 lead after 40 minutes of play, he stopped all 15 shots thrown his way in the final frame to secure the win for Philadelphia. Hart was back up against Detroit in a game where the offense took center stage. He stopped 32 of 33 while his teammates, led by a goal and an assist each from Couturier and Scott Laughton, hung six goals on the Wings. Elliot finished off the week in Montreal where he stopped 39 shots and helped the Flyers to a 4-3 overtime victory. Ivan Provorov went end-to-end on a highlight-reel goal to secure the win. After a good week followed by a bad week followed by a mediocre week, the Flyers responded with another undefeated week. To avoid another letdown, and continue to hold third place in the Metro, Philly will need to defeat a red-hot Toronto team followed by a very good Arizona team and concluding with a sneaky Ottawa team.

The Rangers have pulled themselves into playoff contention with another great week. They started out hosting the Minnesota Wild in a game that meant a lot for many reasons. Mats Zuccarello made his return to MSG for the first time after a trade deadline deal with Dallas last season. He was held off the scoresheet but Tony DeAngelo wasn’t. The defenceman notched an assist and the game-winning goal in overtime. With the win, Henrik Lundqvist took sole possession of fifth place on the NHL’s all-time wins list. On Nov. 27, Lundqvist had one of his best games when he stopped 41 of 43 shots against the Hurricanes. The Blueshirts got three first period goals and held off Carolina for the rest of the time, earning a second straight 3-2 victory. They suffered a speed bump on national television when they blew a 2-0 lead to the Bruins courtesy of David Pastrnak and David Krejci combining to tie and end the game in overtime. The final day of November was a good one for the Rangers as they used special teams to shutout the Devils 4-0. A first period power-play goal from the team’s rookie point leader Adam Fox was the game-winner while Mika Zibanejad and Jesper Fast contributed short-handed goals in the third. The Rangers are right in the thick of the playoff hunt in the Eastern Conference and they will look to continue the hot streak as they begin December at home facing the Vegas Golden Knights.

The point streak ended in deflating fashion in Anaheim on Nov. 25. After losing their California road trip opener 2-1 in overtime to the Sharks, the Islanders were shutout for the first time this season by the Ducks, 3-0. They followed that up with a 4-1 loss to the Kings in LA. After scoring two goals in three games on the west coast, New York came home to face the Columbus Blue Jackets. The captain Anders Lee got the scoring started a minute and 18 seconds into the game while Thomas Greiss had to leave due to sickness, forcing Semyon Varlamov into action just 14 minutes in. Mat Barzal scored a beautiful goal in the second, backhand top shelf, and that would be the last of the scoring as the Islanders’ netminders combined for a shutout. It was the third combined shutout in team history and first since Apr. 4 1998 when Tommy Salo got thrown out for fighting Rangers goalie Dan Cloutier, forcing Wade Flaherty to make the final three saves and preserve the shutout. It was a good response from a team coming off a rough road trip. The road work continues for the Islanders this week as they head to Detroit and Montreal to begin December. They come home to face Vegas before heading out to Dallas to begin a three-game road trip.

Bringing up the rear once again is the model of consistency, the New Jersey Devils. They began the week hosting the Minnesota Wild and rookie goaltender Kaapo Kahkonen in his first NHL game. He stopped 32 of 34 as Minnesota got a 3-2 win. The Devils then went on the road to Montreal on Thanksgiving where they won a barn burner, 6-4. Blake Coleman had two goals and two assists while Travis Zajac and Nikita Gusev each notched three points. The was the best it would get as New Jersey came right back down to Earth two nights later when they got shutout 4-0 by the rival Rangers on home ice. To make matters worse, rumors began swirling around star Taylor Hall as reports came in about GM Ray Shero beginning to field calls about him. Another rough week in a rough season. A four-game week awaits the Devils, beginning with a game in Buffalo followed by two at home against Vegas and Chicago and then the start of a 4-game road trip in Nashville.

Islanders’ point streak ends at 17 in Anaheim
Blueshirt Takeaways: What a Difference a Month Makes