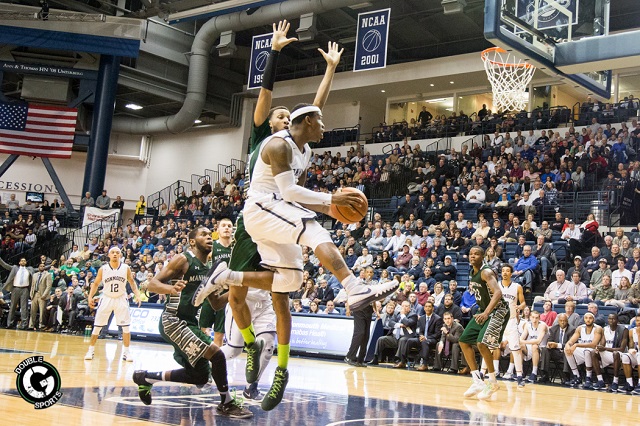 Monmouth bench gets the attention, but the Hawks are just as exciting on the court

The Monmouth Hawks and their “best bench in basketball” have become fixtures on many SportsCenter highlights. But watch out…if you are too busy watching the bench you are missing out on some of the best basketball being played in not only the metro area, but the nation.
Yes, you read that right…Monmouth basketball with 22 wins (including their last eight) has shown that they belong in the NCAA tournament conversation.
While they gear up for the MAAC post-season tournament, they are also building up an impressive resume that can not be ignored by the NCAA and their selection committee.
If the Hawks win their conference tournament, they will have earned the automatic qualifier into the tournament. But as we all know, conference tournaments can be unpredictable and anything can happen (and often does). What happens if they get knocked out? Do they still have a chance for the “Big Dance”?
Will the 22+ wins be enough to garner one of the coveted at-large bids? Impressive victories against Notre Dame, UCLA and Georgetown will certainly help their case against some of the other potential at-large schools (i.e., Stony Brook, Syracuse, Seton Hall). My vote would be a resounding YES!
Monmouth play’s a fundamentally sound but extremely entertaining style of basketball. The Hawks’ style of play could scare others in their bracket, playing unrelenting team defense and they pushing the offense at a quick pace. They have a combination of speed and size at almost every position on the floor. Sharp shooters from deep and muscle on the blocks.
So next time you are watching the Monmouth bench, don’t forget to watch what got them all excited in the first place.
Post Views: 1,020
The following two tabs change content below.