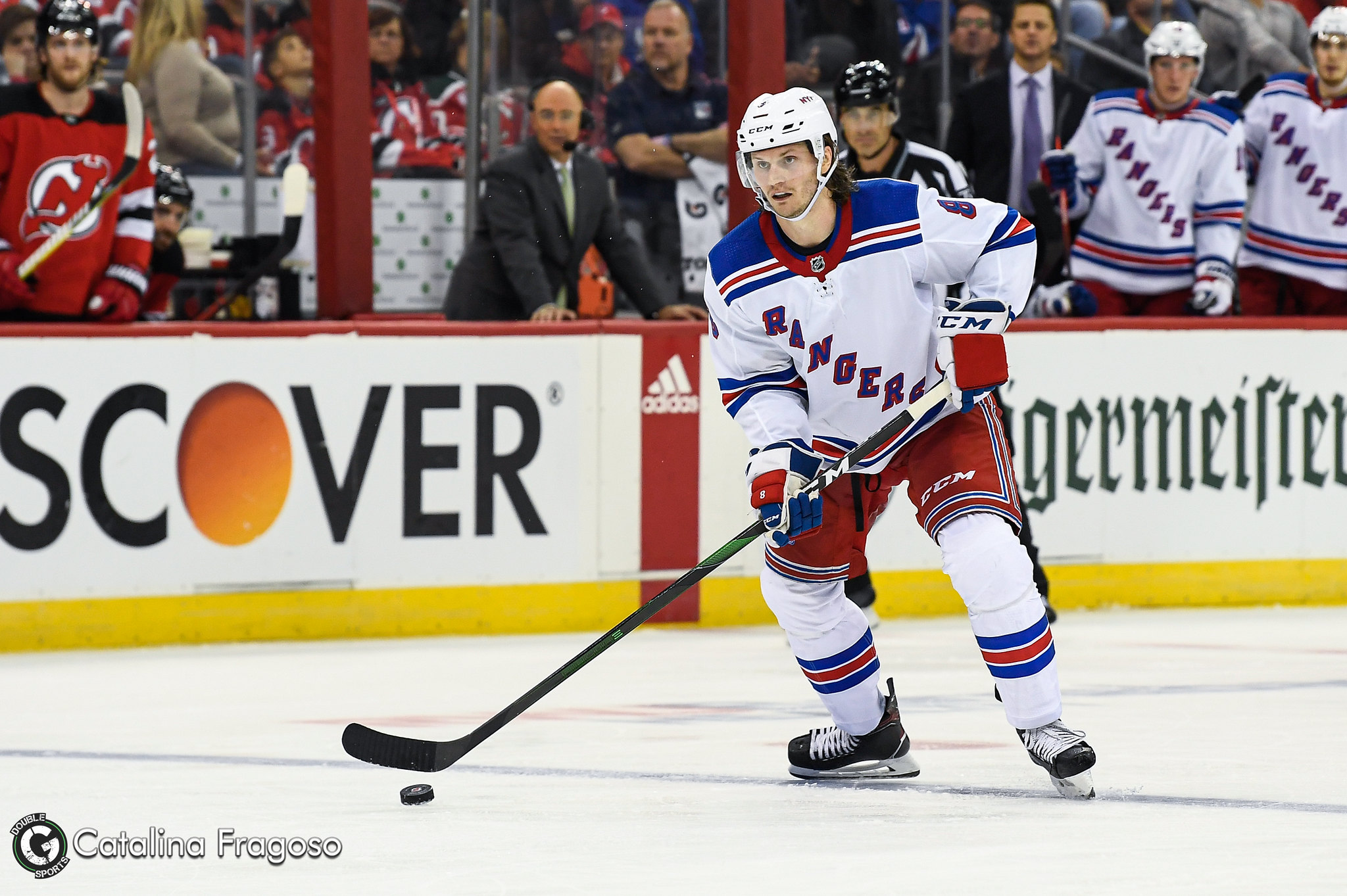 The All-Stars have been announced and Artemi Panarin will represent the Blueshirts at this year’s All-Star game in St. Louis. I thought it was time to give all of the Rangers their mid-season report cards. Some players stood out, while others have faded into the background.

His line combinations have helped the team win games. Kakko has not developed into a superstar yet, but we understand he is only eighteen and has a lot of time left. Quinn’s first line with Strome and Panarin has been excellent. Quinn has nurtured Zibanejad, who has been playing very well. Anthony DeAngelo has been consistently good as well. I think he has really developed these players and will continue to do so with others.

Panarin has played even better than I expected. I knew he was one of the league’s best offensive players, who has scored almost as many points as Sidney Crosby over the last three years, but could he be this good? Yes, Panarin has 55 points in 39 games. When he scored his 50th point, he became the fifth Ranger behind Gretzky and Messier to score 50 points in 38 games or less.

He had an injury in November but since then he’s been skating very well and has been an offensive threat every night. He is the Rangers alternate captain along with Chris Kreider and so far they have done a good job as leaders on this young team.

I think he deserves credit for how some young forwards have come around. At times Kreider has been seen on the Ranger bench talking to younger players. Kreider has 12 goals and 13 assists, not bad, not on pace to have a great season, but I think he has a nice leader-like role on this year’s team. Rangers fans will watch and see if Kreider is traded on February 24. No doubt, there are several teams interested in trading with the Rangers for Kreider.

Coming into this season, I was one of the pundits that thought Kaapo Kakko would be on the first line and Strome would be lucky to play on the third line. However, Strome has shut me up, he is second on the team with 37 points in 39 games.

I think this player could be a lot better. He has good size at 6’2”, 195 lbs. He has great hands and playmaking ability, but six goals and 15 assists does not add up. I expect him to change his game or possibly get traded because he does not play like David Quinn wants him to.

He’s been a breath of fresh air since re-joining the team from Hartford in late October. Chytil skates fast, has great hands and adds a spark to the line-up that the Rangers have benefitted from.

Howden scored against the Toronto Maple Leafs, which was his first point in the last five games. I understand he is outside the top-six and doing a good defensive job, but does he have more to offer than to be a depth-forward?

He had a hot streak going in November, capped off by his brilliant goal in overtime to defeat the Penguins on Nov. 12. Still, Kakko has not shown the offense I would like to see from him, that Chytil already possesses. Perhaps, he will take more time to get his game going.

Best game two goals in a historic comeback against Montreal on Nov. 23. Added toughness and a nose for the net to a team with a lot of European stickhandling forwards. Rangers will need him as soon as possible, as he returns from a broken hand.

Smith has been a huge disappointment after signing a four-year contract in 2017. Smith was supposed to be a tough defenseman with an ability to skate and play some offense. Look at where he is now. Just barely staying in the line-up as a fourth-line winger.

Haley has been the Ranger’s designated fighter when called upon. He has not played every game. He is a good asset to have in games against physical teams.

He has been a good fourth-line center. He checks diligently and has some speed which he uses to forecheck and thwart his opponent’s offense.

Has cooled down after starting the season with a resounding slap-shot against his former team in a 5-4 win. Trouba has not racked up the points this season but he plays his style every night and he seem to be well-respected by his teammates. Unlike other d-men like Skjei and Staal, Trouba has played every game this year and was never benched by his coach.

While his defense could always use some work, the New Jersey native is eighth among NHL d-men with 29 points this season. He has shown good speed and puck movement all year. DeAngelo also became the third Rangers d-man to score two OT goals in one season.

He has played decently well all year, but I think he can play better offensively. Skjei carried the puck more and shot more the last two years but has faded into the background this year. His plus-four rating shows he is playing solid defense, but also that he is not scoring that much. If Skjei continues to use his size to play tough in his defensive zone, I am satisfied with that.

He’s been a staple in the Rangers’ blue-line for 12 years now. He was an important part of the 2014 and 2015 playoff runs, but now Staal’s luster is fading. Coach Quinn scratched Staal for a month in November and early December, preferring Ryan Lindgren and Adam Fox to play third-pair minutes. If Staal thinks he has some fuel left in his tank, maybe he should consider a trade.

Since joining the Rangers on Oct. 29, Lindgren has been a steady defensive d-man. Lindgren does not add much offensively, but he has good hockey sense, because he moves the puck safely and quickly out of his defensive-zone and uses his body well to win pucks and defend his net, despite not being a big d-man at 6’0” 190 lbs.

He’s one of my favorites. Despite lacking size and the skill-set NHL d-men typically have, Fox has played remarkably well. Fox has been the difference in many wins, including making a great pass to Kaapo Kakko on his over-time goal against Pittsburgh on Nov. 12. He has great hockey sense, because of his ability to avoid checking from opponents, to make good passes. Also, he has been a great addition to the second power-play unit. Fox assisted Mika Zibanejad’s first goal since returning from injury on the power-play against Carolina on Nov. 27.

Hajek did not look ready for the speed of the NHL game in the preseason. He was coughing up the puck like my mid-december cold. However, Hajek totally reversed his fortunes and became a solid second-third-line defenseman for the Rangers over the course of the first three months of hockey. Hajek has missed three weeks since injuring his knee in early December. The Rangers should have enough on defense to not miss the 21-year-old, but he is a great skater who they could use.

I was on the fence about giving the Rangers’ sure-fire hall-of-fame legend an A for his play this season. His numbers are well below his standards. Lundqvist has done a great job even when the team in front of him is not playing well defensively. He also stole a victory from the Carolina Hurricanes in November.

In his second full season in a Rangers uniform, the young goalie has improved and has even started the movement for him to take over the number-one goalie spot ahead of Lundqvist. Like Lundqvist’s stats, Georgiev’s are not that good, mostly because he has a young, inexperienced team in front of him. Georgiev’s 44-save performance on Saturday against the Maple Leafs is one good reason why he deserves an ‘A’ thus far.