As the midway point in NYCFC’s season inches closer, it is time to reflect on the season so far. Before the start of the season, NYCFC was a top choice by many to be leading the MLS. However, things don’t always pan out how you hope them to.

To best answer, that question, every player (plus head coach Patrick Vieira) needs to be analyzed. This article will examine the play of NYCFC’s defenders this season. Since a season ago was full of defensive mishaps, this year’s defender ratings will help show if NYCFC has made improvements in front of new goalkeeper Sean Johnson. 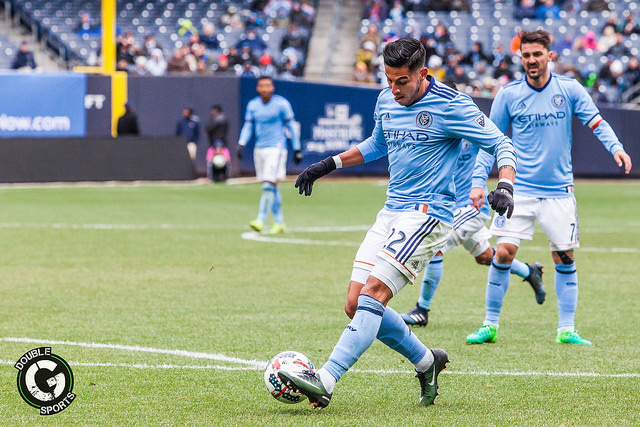 NYCFC’s defender of the year last season has had a tough go of it this season. In mid-April, Matarrita suffered a rough ankle injury in practice that kept him sidelined for six weeks. Just recently, Matarrita made his return to the field as a substitute against the Philadelphia Union on June 3rd (due note that he didn’t slide in at left-back but at left-wing.)

In the matches that he has played, Matarrita has been reliable as always. However, it seems that he was missing a step from his phenomenal season last year. To be fair, this makes sense for the 22-year-old as we only witnessed his first matches of the season, a time in which players get reaccustomed to match speed.

Now that he is back from injury, expect to see the Costa Rican return to back to form. But, for the sake of this rating, Matarrita will be graded based on his play so far this season.

While Matarrita was out, NYCFC’s summer signing Ben Sweat got the call into the Starting XI. From the start, Sweat nestled into the left-back position nicely. In his seven appearances so far this season, Sweat has picked up two assists while mainly being a defensive minded option at left-back.

In his most recent games, Sweat’s play has slightly deteriorated. Occasionally, Sweat will let his opponent get around him to whip in a cross or will pick up a dumb foul to allow a free-kick in the defensive third. Even with that being the case, Sweat has earned his stripes at left-back this season.

Now that Matarrita is back from injury, expect Sweat to move back to the bench. But, in his seven appearances, Sweat has proven he can be a reliable option at left-back. 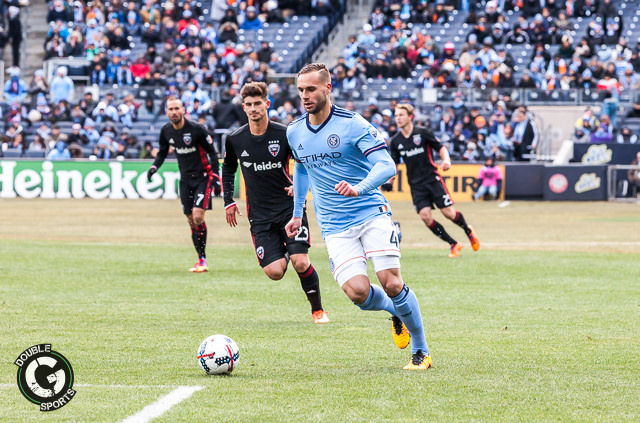 In now his second season at NYCFC (came over midway through last season,) Chanot has been the most solid defensive option for NYCFC. In his fourteen games for the ‘Boys in Blue’ this season, Chanot has been a rock in the backline.

Whether it is his skill on the ball, his calm presence, or his precise reading of the play, Chanot has made NYCFC one of the better defensive teams in the league. It is hard to recount a moment in which Chanot has been off this season, as there are only a few minuscule things you could critique him on.

Without a doubt, Chanot has been the best defender this season for NYCFC. But, Chanot did recently pick up a shoulder injury in a recent World Cup Qualifier when playing for Luxembourg. Hopefully, for NYCFC’s sake, that injury isn’t too serious.

As Chanot’s partner in crime at centre-back, Callens has proven to have been a fantastic offseason addition for NYCFC. The Peruvian has shown Patrick Vieira that he can be a reliable option at centre-back and that he is a better option than fellow centre-back Frederic Brilliant.

For most of the season, Callens has been a decent aerial presence, a good defender on one-on-ones, and good with his feet. But, there have been some blemishes on the Peruvian’s ‘report card.’ In the match at Atlanta United, Callens struggled mightily, and his errors led to multiple Atlanta goals. These untimely errors are in short supply for the Peruvian but nevertheless still exist.

Without the mistakes, Callens is one of the best centre-backs in Major League Soccer. But, his previous errors knock down what could have been a stellar rating. 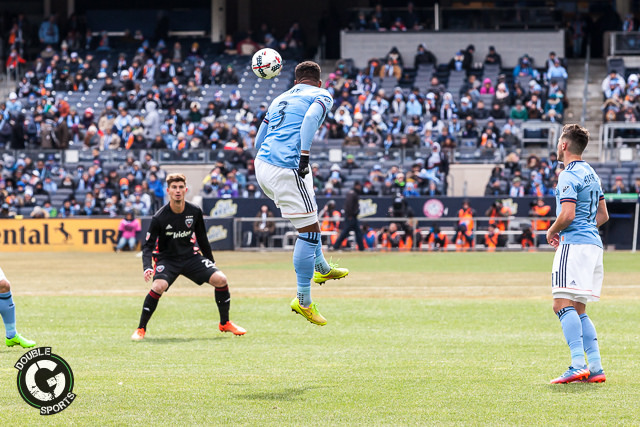 If there was one player who has truly stepped up the most this season, it is Ethan White. Being a natural centre-back, playing out at right-back has been a learning experience for White. Despite being tough at times, the 26-year-old has adjusted well to his new position.

There are a few things that White lacks as a right-back still. White isn’t the quickest, and he isn’t the best going forward. Even with that being the case, the Maryland native has gotten better every single week. With two assists in thirteen games, the numbers show that White is starting to get forward and starts to overlap Jack Harrison more consistently.

In post-match interviews this season, White is always full of smiles and has one of the most positive attitudes on the team. In addition to that, his teammates speak his praises of being a great teammate and someone who is improving every week.

There is a reason why White has taken over the starting job at right-back and why Patrick Vieira continues to put his trust in him.

Allen easily has been the biggest disappointment of the NYCFC team. Heading into the season, Allen seemed like a lock at right-back. But, after the opening match at Orlando City, that wasn’t the case anymore.

Allen, known for his hot-temper and competitive nature has been all but nonexistent on NYCFC’s roster. The New Jersey native has been a liability at right-back and has rightfully lost his job to Ethan White.

After a long string of matches not on the roster, Allen has finally seen playing time again for NYCFC. But, in his minutes since returning, Allen hasn’t proven to Vieira that he is not a valued asset in the defense.

Last year’s starting centre-back has transitioned to the bench this season with the arrival of Peruvian centre-back Alexander Callens. Brilliant is now a spot-starter for NYCFC and typically comes on late in games when Vieira wants to park the bus to earn a result or wants an aerial presence in the defense to prevent desperation crosses from finding an opposing player.

As a 6’3 centre-back who isn’t great with his feet, Brilliant has found it tough this year. In his substitute appearances, Brilliant hasn’t been a lock down defender or an aerial presence like Vieira wants him to be.

When he starts, he isn’t an elite centre-back by any stretch of the imagination. Notably against DC United two months ago, Brilliant’s poor play led to the opening goal for DC United, thus providing a perfect representation of how his season has gone so far. Subpar.

The only value the Frenchman has seemed to provide NYCFC this season is an average option at centre-back if Vieira wants to rest Chanot of Callens. To be fair to Brilliant, this isn’t a play style that benefits him.

For the rest of the season, only expect to see Brilliant make substitute appearances or the rare start against a weak opponent.

NYCFC Mid-Season Goalkeeper Ratings
What to Expect, Where to Watch, and What Will Happen in Tonight’s “Hudson River Derby”