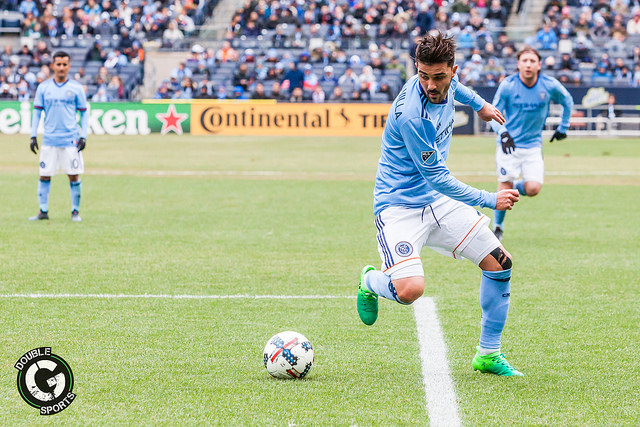 WASHINGTON D.C. — In their second game on the road this year, NYCFC failed to come away with any points as they lost to D.C. United on Saturday by the score of 2-1. More notably, NYCFC showed weakness in defense with the absence of Ethan White and the insert of Frederick Brilliant.

After a lackluster first half in which no team showed any signs of life, D.C. United came out in the second half and scored off an NYCFC turnover in their half, courtesy of right-back Brilliant. Lloyd Sam slotted home the opener and put up D.C. United up 1-0 after 53 minutes of mediocre soccer.

Twenty minutes later, D.C. United tacked on another goal through a superb volley courtesy of Luciano Acosta to bury NYCFC in a 2-0 hole. David Villa was able to grab one back for the NYCFC off of an excellent ball in by Tommy McNamara in the 84th minute, but it was too little too late as NYCFC couldn’t find an equalizer, thus allowing D.C. United to get revenge after being thrashed 4-0 at Yankee Stadium last March.

When analyzing what is going wrong with NYCFC, you have to look at the defense and immediately at right-back. After RJ Allen had started the season opener at right-back, Vieira made the switch over to natural center back Ethan White for the next slate of games. Now, Vieira made another switch by putting another natural center-back, Frederick Brilliant, at right-back for today’s game.

(To clarify, NYCFC did trot out onto the field in a five-back formation, but Brilliant played what was almost a right-back role during the entire game.)

What is the problem with all three of these right-back options? None of them have great pace and are not good with their feet in the defensive third. When put under pressure, they crumble. When asked to go forward, they either don’t go at all or go too often and can’t get back to stop the counter.

The reality is setting in for Vieira right now as there is no good option at right-back for NYCFC. Vieira cannot be blamed right now for trying to find an answer at right-back as that is what a manager is supposed to do, find a solution to a problem. However, this is the foreshadowing of a possible long-term problem for NYCFC and here is why.

Last year, everyone saw how the NYCFC back-line faltered last season, and it seemed that with every game, a new lineup ensued. Furthermore, that unfamiliarity of the backline had its obvious downsides as defensive errors were all too common, and opposing wingers would beat the NYCFC fullbacks back down the field on the counter-attack.

This year, the same thing can happen if Vieira cannot find a mainstay at right-back. For the next few games, Vieira should continue to experiment with different right-backs. Personally, Ethan White has shown the most upside and deserves to be the starter as of right now. But, searching for a consistent right-back would not be a bad idea by the NYCFC front office.