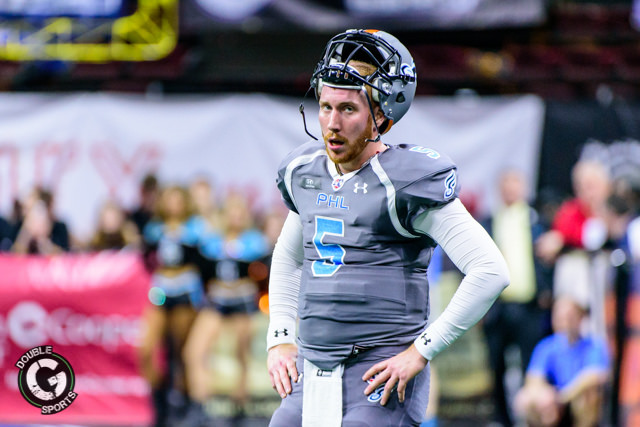 Philadelphia Soul star quarterback Dan Raudabaugh has been placed on injured reserve. He will miss at least the next eight weeks. Danny Southwick has been assigned to the team.

Raudabaugh will be eligible to return the weekend of July 14, which is the weekend of the first round of the Arena Football League playoffs. All four teams in the league will make the postseason, so the loss of Raudabaugh won’t affect that.

It could affect them getting a home playoff game for that first weekend, however. It could leave them at a disadvantage should they lose by a big margin to their opponent during the postseason.

Raudabaugh has been with the Philadelphia Soul since 2012. He has led them to the last two ArenaBowl titles (2016, 2017). With a win in ArenaBowl XXXI on July 28, they would be the third team to win three consecutive ArenaBowl titles.

Southwick, Save the Soul

Southwick, on the other hand, has been around several teams. He has also recently played with the Massachusetts Pirates as a backup in the National Arena League (NAL). He has not started since playing with the Portland Steel in 2016. He threw only one pass in 2017 with the Cleveland Gladiators.

While things look bleak with Southwick as the starter, it could be different for him. He has several receivers of high talent he has not had before. Darius Reynolds, Sean Kauleinamoku and Darius Prince are a trio of receivers that have worked together well all season. With good practice, Southwick could keep the team afloat the rest of the way.

Philadelphia, who have lost two in a row, will look to bounce back this Friday night when they travel to take on the Baltimore Brigade at the Royals Farms Arena in Baltimore, MD.