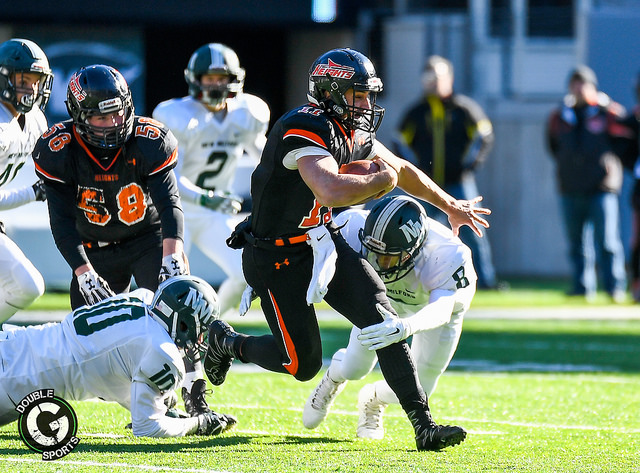 This season, Hasbrouck Heights had been accustomed to finishing opponents off early and by a margin of almost 32 points. However, on championship weekend, they found themselves in a dogfight against a pesky New Milford squad in the first half of the North 1, Group 1 title game at MetLife Stadium. Uncharacteristic penalties and turnovers cost the Aviators at chances to get on the scoreboard.

New Milford Knights senior running back, Christian Correa, who amassed 2,279 yards and 33 touchdowns this season, pounded the rock, rushing for close to 130 yards, including a dazzling 84-yard score giving the Knights a 6-0 lead at halftime.

Coming out of the locker room, the Hasbrouck Heights Aviators resembled the dominant team that had won the NJIC-Meadowlands title and NJIC Championship game. They would outscore New Milford 30-6 in the second half  to cap off an undefeated season at 12-0 and win their first state title since 2007.

“We came out in the second half with fire in our eyes and realized we had two quarters left in this black and orange jersey and made it possible to come out on top,” said quarterback Frank Quatrone. “It’s all due to the 11 guys on the field and offensive line, skill guys and defense did an outstanding job in this game and reason we are undefeated. We came out motivated and were not going to lose.”

After receiving the second half kickoff, Quatrone orchestrated a 10-play, 69-yard drive which was capped off by an 18-yard scramble into the end zone putting Hasbrouck Heights ahead 7-6. Later in the period, Quatrone broke free for a 62-yard run moving the ball deep inside New Milford territory.

Quatrone had a monstrous day on the ground rushing 26 times for 275 yards. Senior running back John Iurato finished off the drive darting through traffic for a 9-yard touchdown with 16 seconds remaining. Going for the two-point conversion, Quatrone connected on a pass to wide-open Philip Cites making it 14-6.

“We knew we could outlast any team and might not be the biggest or fastest but the toughest,” said Iurato. “It’s everyone’s dream to score a touchdown at MetLife Stadium. It came down to who wanted more and tougher and to be honest we ran the same plays and had a lot of desire. Reality hit us in the face, either win our last game or lose our last game as seniors.” 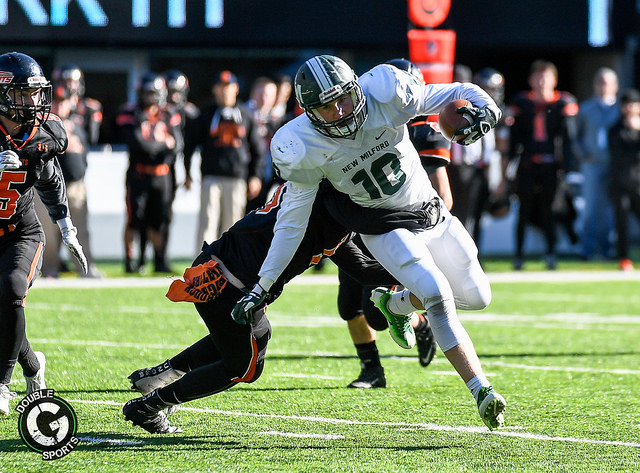 New Milford answered right back with a long drive of their own chewing up nearly four minutes of the clock including converting a key fourth down on 4th and 9 at the Aviators on QB keeper by Ryan Picinic. Correa tacked on his second score of the game busting through for a 24-yard touchdown. An errant snap thwarted a two-point conversion attempt with Hasbrouck Heights holding a 14-12 advantage with 8:12 remaining.

Back came Quatrone and company marching down the field in seven plays and on a 2nd & 11 at the New Milford 39-yard line, Quatrone found a seam in the line and raced untouched down the left sidelines into end zone. On the two-point conversion Quatrone tossed a pass to wide receiver Philip Viola who made a nifty diving catch extending the lead to 22-12 with 3:33 on the clock. Quatrone cemented the victory on a 49-yard score down the right sidelines with 1:15 left.

“The second half we came out together, dug deep and making blocks and were able to execute,” Quatrone said. “It feels good to accomplish this goal with this team. We had three goals this season, league title, conference title and state title and able to check of all three. This is what we worked for from day one with juniors and seniors coming together and made a difference in clicking on the field.”