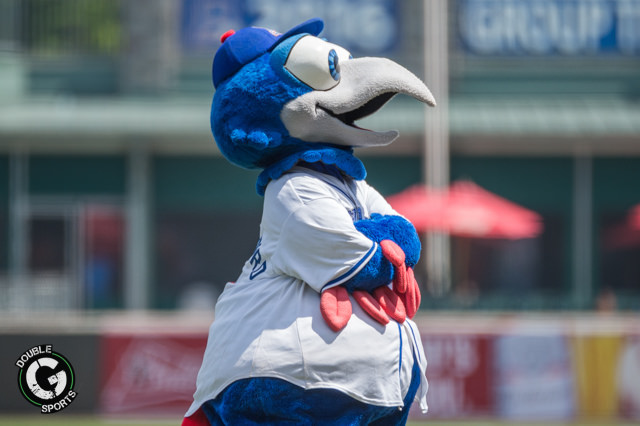 The Rockland Boulders returned to Palisades Credit Union Park on a high note, winners of four in a row and seven out of their last ten games. Now a stiff test would come against a very potent lineup and first place New Jersey Jackals who swept the Boulders the last time the two teams’ squared off against each other back in July.

In the first game of the series, Rockland wasted no time getting on the board as Marcus Nidiffer lined a two-out RBI single to left center in the first inning. New Jersey answered back in the fourth inning on a two-out solo blast off the bat of Richard Stock. Jared Schlehuber continued to have a monstrous August socking his 11th home run of the season, deep over the right center field bleachers in the bottom half of the inning.

“Going into this game this guy (Jared Schlehuber) has seven home runs in the month of August and he is seeing it and not missed anything,” Boulders Manager Jamie Keefe said. “He didn’t miss a pitch at all while we were up in Trois-Rivières and flew out to the wall and warning track five times. In that situation he knows Isaac (Pavlik) and played with him a whole year and seem a few times this year and to get yourself in a situation and make sure he leaves the ball up and not miss it is huge.”

The back and forth action continued in the seventh with Stock drilling a one out double. On the next play, Johnny Bladel hit a chopper to Junior Arrojo that deflected off Arrojo into shallow right allowing Stock to score knotting the game up at 2-2. In the bottom half of the inning, with one swing of the bat Elvin Soto changed everything crushing a laser into the left field grandstand. Arrojo atoned for his error lacing a single to right field scoring Pat McKenna from second base.

“Jamie has been yelling at me the last couple of days to keep it quiet and simple,” said Soto. “A pitch was left up and I put the bat on the ball and it went out. I told Nelo if I had a pitch to drive I’m going to try to hit a home run.”

“It’s awesome, you want to get hot right before the playoffs and Jamie said in the meeting the team that gets hot is the team that wins it all. We’re doing the small things by getting the bunts down and moving the runners over and bringing guys in from third base. We’re rolling, had a little bad stretch for 11 games but the team is turning it around and preaching all about getting to the top and getting over the hump. This series is huge since we got swept at their place last time but this is more like a playoff series and we’re going to face them at some point during the playoffs.”

Making his third start in a Boulders uniform, Brett Palanski tossed a brilliant outing going seven innings yielding two runs on four hits while striking out five and walking one for his second win in less than a week. Rockland’s defense was superb as Mike Fransoso made a pair of spectacular plays in the infield while Leandro Castro threw out Michael O’Neill at second attempting to tag up & reach second base in the sixth inning.

The Jackals did not retreat, placing runners at first and second with one out in the ninth but Hector Nelo rebounded getting D’Vontrey Richardson on a fly out and Bladel to pop out registering his 13h save of the season.

“We could have broken that game early but Pavlik made pitches when he needed to get and got himself out of it,” said Keefe. “Palanski was dominant again tonight and last two starts with one earned run in 13 innings and we’ll take that anytime. He’s been good so far, happy he is here and know that he can come in here and helps us win a series and more importantly last two outings to help save the bullpen and give guys rest.”

“To have a guy like Elvin who we have been telling to stay within himself and when he does that that’s how good he can be. Is he the guy who is going to 10 or 15 home runs? No, but he is a doubles guy and when he doesn’t try to get big he is really good and a good swing in a crucial situation is huge.”

Marcus Nidiffer carried Rockland in game two of the series driving in three runs while Quinnton Mack contributed a run-producing double. Starter David Fischer battled through 5 2/3 innings giving up one run on five hits and striking out six and walking five to earn his seventh win of the season. Hector Nelo came on in the ninth to record his 14th save of the season.

Heavy rains forced the rubber match of the series to be suspended in the fifth inning with the game tied at 3-3. The game will be made up on September 2. Trailing 1-0 in the second inning, Jared Schlehuber walloped his 12th home run of the year. Marcus Nidiffer added his 16th of the season, a two-run shot in the third inning. Can-Am League leading home run leader Art Charles tied the game in the fourth with a two-run shot.

The Boulder return to Canada where they will face off against the Ottawa Champions in a three-game set at Raymond Chabot Grant Thornton Park.